Dry Times on the Yorkshire Moors

I boarded the train at King’s Cross to Malton with a bag full of protein bars and a pocket full of nerves for a week’s cycling across Yorkshire interviewing people for the Food, Farming, and Countryside Commission. I was touched by the openness and warmth of the individuals that shared their stories with me, from the Yorkshire Moors to the Dales. Cycling through the warm sun and beautiful landscape into Malton I reflected that I had forgotten what the quiet of the country sounded like. And had never seen so much road-kill in my life.

The drought was in full swing in my week in Yorkshire. As one cattle farmer on his diversified farm kindly pointed out to me, “Yes, I suppose the field is a pretty shade of yellow, but its silage; it’s meant to be green”. Where one would normally expect three cuts from a field he had made just one. This was an early cut, due to the drought, requiring permission from Natural England. Under higher level stewardship (HLS) some on-farm activities are monitored to ensure the ground is seeded sufficiently, and protect ground-nesting birds. However this year due to the Beast from the East followed by months of drought, the prescripted timings did not match the reality. In an irregular climate it is difficult to marry regulation on environmental protection with practicalities on the ground, despite both farmers and bureaucrats wanting what is best for the land. 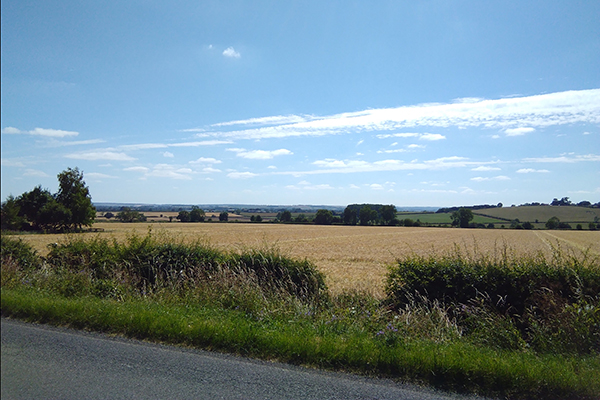 Many voiced frustrations that decisions are made from the top-down without space for any input from those with extensive, specialist knowledge of the industry and their land. I was told about a case where farmers had been asked to grow lupin on a limestone plateau, as part of their pillar two funding support – the soil type does not support this kind of flower. Others grapple with the lack of basic infrastructure such as internet. Residents have been first in-line (with business second) to receive internet after the government pledged ‘universal service obligation’ but at present 10% of North Yorkshire still sits in ‘not-spots’. As a pig farmer based in Carlton explained to me, “you must apply for a licence online on the day to take an animal to slaughter. How can you if you haven’t got internet?”.

A regular site, cycling across Yorkshire, were A4 posters exclaiming loudly “Stop Fracking”. One farmer I met told me they were sitting on a fracking site. This, understandably, made them feel stressed. “Everyone’s heard the horror stories about how it affects the water table, and animals dying.” The community was clearly opposed to the development but, despite their best efforts, failed to impact the  decision makers. “The council and government are asking the wrong questions.”

Across the region farmer’s yields were low and they worried about feeding their animals through winter to big expense if silage, hay, and other grasses would need to be imported from other regions or abroad. These worries are compounded with the uncertainties of Brexit. Without knowing cost or availability of importing goods essential for their business, whether they will soon be competing with cheaper imported goods and whether farmers will have subsidies after 2020 many feel trapped in an impossible lack of preparation. The pound’s crash after the vote made the agro-business more attractive for export but longer term there has been an effect on investment. 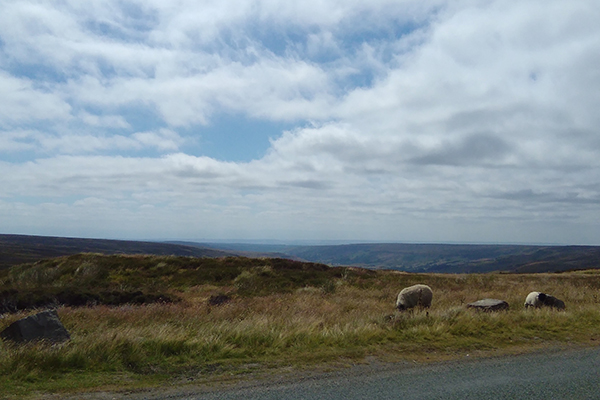 These stresses are having a clear effect on the mental health of farmers in the region. I spoke with Sophie Green, Charitable Activities Manager for the Yorkshire Agricultural Society about a few of the initiatives they are running to support good mental health in farming, such as health checks at ‘marts’. Farmers are free to access health checks for things such as cholesterol levels, blood pressure, and blood sugar levels. Alongside this service are confidential chats about general wellbeing and mental health. These have been well attended and Sophie and her team are meeting with more mart chaplains to expand the programme. Farmers are a proud people and although it seems that society more widely is accepting of discussing mental health as less and less of a taboo subject, Sophie tells me that a lot of the issues are still coming through farmer’s wives groups and anonymously through paper slips left out for feedback from farmers attending events in person.

Incidental support networks that used to exist in the area seem to be becoming fewer and farther in between. Social spaces such as Village Halls are closing due to lack of funds, with marts becoming primary social spaces although they aren’t used by all farmers. One farmer I met with said he wouldn’t use the marts for ethical reasons. “The extra journey can be stressful for the animal and also affect the quality of the meat”, although he recognised that marts serve a dual-purpose; an auction as well as a meeting space for farmers. With smaller farms packing up and closing, in some communities the countryside is becoming an increasingly isolating environment. One farmer’s wife reported that if the milk tanker stopped coming she would be the only person he saw.

In contrast to some difficult stories told by other upland farmers, High View Farm was a place of refuge - a fully organic, 650 acre working farm that also homes people with mental health issues or learning difficulties. This was a community, full of people and activity. In stark contrast to the bare land of the moors, this was a leafy oasis, with the land having been partially reforested 70 years ago. This creates a microclimate in which a mixed farm with vegetable production could exist on land naturally hostile to this kind of farming. It was striking that High View’s land, while dry, was noticeably less yellow than the fields I’d been seeing previously.

During my final visit the heavens opened. The whole building was staring out of the window – I think we’d all forgotten what rain was. My final leg of the journey was a two hour cycle through a thunderstorm back to Skipton to catch my train.. Drenched to the bone, in the rain that every farm in Yorkshire was waiting for, I smiled all the way home.

Eleanor is the Engagement Coordinator in the Fellowship Team.