On Friday 7th September 2018, ‘Tarinainanika’, an international physical theatre company based in Tokyo, Japan, delivered an unusually interesting performance to Whitley Academy pupils that opened our eyes to a whole new world. Tarinainanika specialise in the art of ‘Corporeal Mime’. We have to honestly say that at the beginning of the performance we had no idea what ‘Corporeal Mime’ was about! The three performers were Tania Coke, Kentaro Suyama and Toshihiko Nishimura. 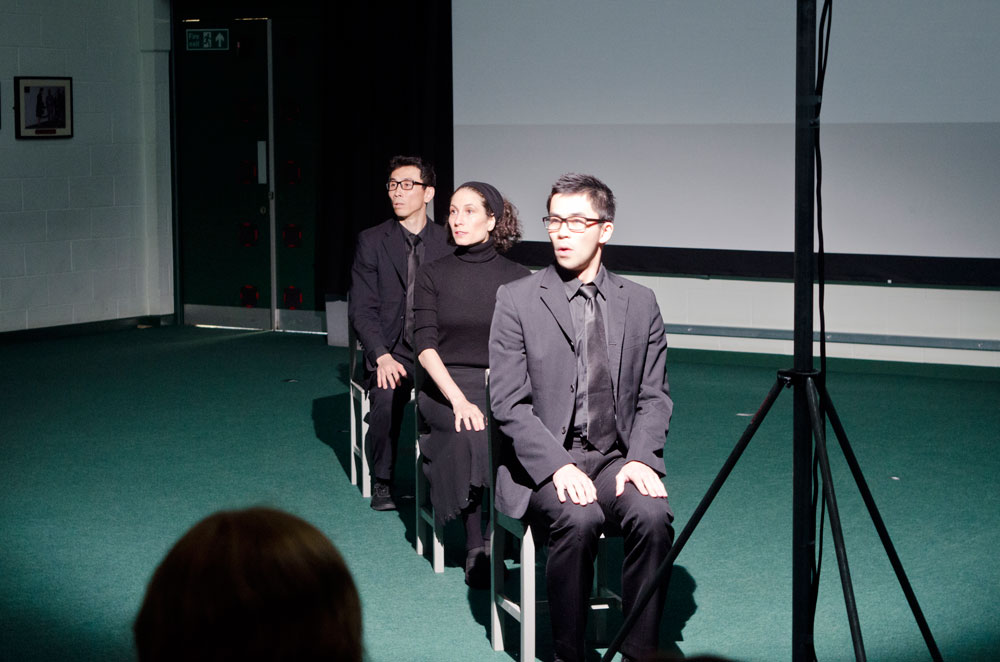 The play began at 1:20 pm, and as the bright lights and eerie, traditional Japanese music filled the Auditorium, the space inside our school had been transformed beyond recognition. With the professional lighting, and the stereo sounds from the speakers, we all felt like we’d been transported to the depths of the Tokyo underground. The performance had no story line, and was open for interpretation with a collage of thoughts, memories and dreams. It wasn’t difficult to visualise some confusion in the audience as the short dialogues from the performers were repeated frequently. Later on in the workshop, we realised the rather in-depth message behind the repetition routine: consciously or unconsciously, we do repeat lots of things in life and it is sometimes easy to feel lost in a sea of different messages we see each day.

After the play had come to an end, we had a Q&A session with Tania, Kentaro, Toshihiko, Amy (the lighting expert) and Chloe (the audio-visual expert) that allowed our inquisitive minds to pour out our questions and express our views on the performance. With the afternoon moving fast and the end of the visit drawing closer, we decided to move on to the workshop. This opportunity gave us the chance to experience ‘Corporeal Mime’ for ourselves, learning the many, many different ways to shake someone’s hand all with different meanings.

Tokyo Fugue & The Universal Language of the Body

When I was growing up I had no contact with professional artists – I thought they were a separate breed. It never occurred to me that I could become one. So for me it was very special to be able to share Tokyo Fugue and the art of Corporeal Mime with students at RSA Academies. We were hoping that our performance and workshop would encourage students to search for magic beyond the mainstream, to follow the path of passion wherever it takes you. So I was moved almost to tears to hear feedback from one of the School Reporters at Whitley Academy who said that watching our show made her realise you can make something out of anything. I am now profoundly optimistic about the future of the human race!

Thank you With HUGE thanks to Tania Coke, FRSA, Kentaro Suyama and Toshihiko Nishimura for their generosity, for bringing their fabulous theatre to our schools and for inspiring us all. Thanks to Minh Nguyen and Toni Stokes, teachers at Whitley Academy, and to Charlotte Brandy and Jemma Lewis, teachers at Holyhead School for all their hard work to make this happen. And special thanks to the Japan Society, the Great Britain Sasakawa Foundation and to the crowdfunding community of Kickstarter who made this magical experience possible. And finally thanks to Amy Butterworth, Engagement Manager, RSA for her brilliant support to the crowdfunding campaign. If you are an RSA Fellow interested in crowdfunding, you can find out more here.

RSA Academies is a small and dynamic group of schools set up as a charitable company by the RSA in September 2011. The schools are in Birmingham, Coventry, the Black Country and Worcestershire with plans to work with further clusters of schools, including one in Bedford.

The schools are a vital connection between the RSA and education, as they provide a real context to develop ideas about what the curriculum should be like and what excellence means, and the schools benefit from the creative, cultural and social ideas and resources of the RSA. Visit the RSA Academies website.

The RSA Academies are committed to an Arts, Creativity and Cultural Education which includes ‘commissioning professional artists to support and lead high quality learning and participatory experiences’ so we would like to extend an extra special thanks to Tania Coke, FRSA for making this happen.