The RSA’s Economy Team brings you hypotheses and hypocrisies from Monday’s October Budget.

All budgets are a sort of vaudeville; Monday’s more than most. As the Chancellor clears his throat he will be engulfed all around by baying colleagues, who have already cast him as a Fagin figure in a great ‘remoaner-orchestrated’ Brexit betrayal. Plotting will trump listening; sound and fury will drown sober reflection. It would be easy to dismiss the whole exercise on these terms, but with so much awry in our country today insouciance is a luxury we cannot afford. And so here are some of the RSA Economy Team’s predictions for Monday’s matinee.

1. Mitigating the Mayhem of Universal Credit

We at the RSA have been candid in our views about the universal credit (UC) affair and we are not alone. The Public Accounts Committee today joined ourselves, Citizens Advice and others issuing a familiar call: that the DWP are ‘in denial’ about the policy’s failings. It remains, unfortunately, unlikely that the Chancellor will heed our call for an immediate suspension of roll-out, and an independent inquiry into how badly it has been handled.  Instead, it appears that more money will be made available to mitigate the double injustice perpetrated on the victims of the Lib-Con Coalition: of radically complicating an already complex, confusing system and at the same time taking billions of pounds out of it.

Yet UC’s problems do not relate only to equity and welfare. At the RSA we valorise innovative entrepreneurship as a means to greater productivity across the economy. Yet UC risks sinking nascent businesses, and putting self-employed people in jeopardy.

That’s because UC gives claimants who are newly self-employed 12 months to create a viable business, after which a minimum income floor (the national living wage) is used to calculate their entitlement, irrespective of their actual earnings. The logic, such as it is, is that the Government should not prop up businesses which do not provide people with at least the minimum income floor (MIF). The problem, obvious to anyone who has ever set up as business, is that 12 months is often not enough time for businesses to reach this point. UC could well prevent businesses from ever fulfilling their potential. The RSA has previously contended that this start up period be extended to 24 months.

Clearly, combined with a monthly reporting requirement, the MIF is detrimental to self-employed claimants with volatile income. A person earning in large lump sums, dotted through the year, may be entitled to zero Universal Credit in one month, while in another earn very little but see no increase in their UC entitlement, due to the MIF. As the table shows, two people can earn the same amount over the course of the year yet end up with wildly different UC payments because one has lumpier income patterns than the other. 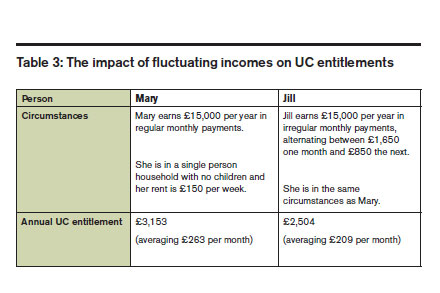 The MIF may also be triggered when claimants have large expenses in one month, such as investments in tools or a sizeable utility bill (more can be found in the RSA’s report: The Entrepreneurial Audit). We have previously argued that this revert to an annualised system (as under tax credits), or work on a quarterly basis (to align with the new tax reporting period).

The result is the opposite of good, meaningful work – and it is just this sort of short-termism that sees the productivity of our economy as a whole fall through the floor.

Universal credit, we regret to say, has made life worse.

And not before time: the Chancellor appears ready to take unilateral action to close the tax net on that most slippery of creatures, the tech juggernaut.

One loophole, often exploited, is that a tech giant will pay part of its employee salaries in the form of shares, which is an expense that can be offset against its Corporation Tax bill. This is a smart workaround for the aspirant tax avoider.

Close that loophole and you solve the problem: so goes the treasury’s thinking and this is all right as far as it goes. The challenge for HMRC, however, is the age-old problem of multinationals moving their money. Many domestic taxes can simply be avoided by channelling money to offshore subsidiaries.

That is why we at the RSA propose a different way for getting tech companies to play fair. We recommend a data levy on tech giants to raise revenue for all of us from the information they manipulate into pure profit.

And a further thought: if the inevitability of avoidance is the issue, why not reform business rates which are far harder to connive?

We hold little hope for such radical ideas in this budget. More doable is the matter of corporation tax. One common-sense plea: stop reducing it. It has fallen from 28% in 2010 to 19% today and is now far below the rates in other G7 countries. Alas, the opposite of common sense on this occasion is rather more likely.

3. An assault on ‘Fake Self-Employees’

One of the more vociferously-floated messages is that the Treasury is finalising plans to overhaul rules that allow self-employed people to avoid paying national insurance. The Chancellor is targeting people who take on work as a private company but are actually, for all intents and purposes, employees.

The Treasury has been briefing to the press that it believes a third of self-employed people use this ‘trick’ to get a tax break. Actually the picture is far more nuanced. This article is but one insight into how those who believe themselves to be genuine employees can be unhappy with the arrangements – they lose out on sick pay, bereavement leave and more and this causes considerable anxieties.

Moreover, the figures briefed by the Treasury merit at least some challenge. A BEIS survey in 2016 showed that just 6% of the self-employed said they were encouraged into self-employment by their employer.

Consider also the potential unintended consequences: ways in which the rule change could hurt the self-employed. If employers face a penalty for accidentally misclassifying workers, they may be more likely to hire large firms to do their jobs (for example short-term IT contracting, construction etc.) rather than individuals offering services.

The key question here is certainty: or lack of it. In technical terms, we are talking about extending so-called IR35 rule changes to the private sector. This means it will now be the employer’s responsibility to ensure compliance – not the employees’. But let us take a step back. The only reason we have IR35 is because work is taxed at different levels for people who are in different organisational forms. This complexity creates confusion. Level the playing field, scrap the differences in rules and there is no need for IR35.

This indeed was one recommendation of Matthew Taylor’s Review for the Government into modern working practices – and it is one of the few that have not yet been addressed by the Government. If this budget gambit unravels they must surely think again - and adopt the Taylor review recommendation.

A perennial canard, this. The Chancellor looks to be about to cut the tax relief that higher rate savers get on their pension funds as a way to fund the Government's NHS spending.

We support pension tax relief reform and posited it as the flagship policy idea from our recent report on retirement security for the self-employed.

However, once again, we advocate going further than what we hear from the Treasury. Consider. the government effectively ‘spends’ as much on tax relief as Defence. The Chancellor’s proposal is naked in its intent, not to reform pensions but to reap cash to spend elsewhere. Our contention is that we must right the pension tax relief system in order to lift pension tax relief across the board - which would address an urgent problem of under-saving among people on low incomes.

Once this money goes out of pensions, it is gone forever. The cash recovered, however, is not a gift that keeps giving. Is this sort of cash-grab really the best way to fund our NHS, or should we look to make the system work better, on its own terms, for vulnerable elderly people first?

And that, really, is the problem in a nutshell. There will be many more such shifts, land-grabs and switch-and-bait magic tricks. Triumphs will be claimed; old funds presented as new initiatives. There will be car-crash ideas and gambits that fail for lack of radicalism.

There will be, we predict, no adequate measures to prepare us for the future; call it the fourth industrial revolution, the age of automation, or a world of future work. Instead there will be half-measures.

Will the Chancellor agree to pay nurses in the north less than their southern counterparts, a move that is sure to unravel before he leaves the chamber? Will he listen to his friends in the centre right think tanks and enable renters to buy their houses at a cost of ‘only’ over a billion, thereby creating yet another middle-class housing bonanza rather than the obvious, long-overdue solution: build more houses? Will he run the gauntlet of his foes and bring in tax rises? He may yet, but if that tax rise is VAT on food, thereby hitting the poorest: well, we would not support such a transparently unfair decision either.

There will be sin taxes, insurance premium tax hikes, the usual unstrategic smorgasbord of micro-changes. But all this leads to one final, slightly self-indulgent question, given where we came in: is this really the best way of deciding our fiscal future?

In the RSA’s final report on the Citizens Economic Council we argued for a more deliberative approach to budget setting. We recommended that HM Treasury and other economic policymaking departments commission Citizen Reference Panels for major economic decisions and publish the results of the Panels’ deliberations.

There are precedents, an approach prototyped by PwC. The Bank of England actually accepted our recommendations and are in the process of setting up and running deliberative panels in each of their 12 Regional Agents. Why not the treasury?

That is the future; on Monday at 3.30pm, we settle down to watch the present unfold. If you are on social media as the budget is delivered, join us as we share our thoughts and reactions live. For now, pass us the popcorn...