A choreography of food, machines and workers

The West Midlands is a major player in UK food manufacturing, employing around 10% of England’s food manufacturing workforce - trailing only to the North West and Yorkshire. Good transport links have played a role in the establishment of so many successful food companies in the West Midlands; access to the criss-cross of motorways connecting the whole country gives a strong competitive advantage.

PDM, the UK’s largest cut leaf salad producer, sells lettuce and salad products to most of the major supermarkets. Their operation in huge. It is hard to communicate the scale - the below video is just one field of the 2,500 acre farm.

In summer, all salad is produced outdoors. In winter, the salad is bought in, mostly from Europe and packaged onsite. PDM have invested in state of the art machinery for cultivation, harvesting, packing and distribution. GPS tractors set perfectly aligned rows optimising the amount of harvestable salad per acre. Huge machines and conveyor belts wash, toss and bag the salad. People step in for the final stage to pack the salad into crates for shipping.

Seedling transplanting and the lettuce harvest are the two areas in which people still do more work than machines. PDM employ hundreds ofmigrant workers in the summer planting and harvest times. They travel to universities and towns in Eastern Europe to recruit migrant workers, particularly university students during their the summer holidays. They pay well - £8.50 minimum with bonuses, which averages to around £9.50. Despite the good pay, PDM struggle to recruit enough staff; “it’s hard work and people prefer working in factories now. With the drop of the pound, workers prefer to find jobs in Germany. That way they can travel home at the weekend to see their families.”

Whilst near Birmingham I was invited to the AGM of the West Midlands branch of the Bakers and Allied Food Workers Union - the union that led McStrike, which secured a 6% pay rise for workers, the largest in McDonalds’ history. There is a huge need to have strong unions upholding the rights of food workers, particularly those coming from Eastern European countries. I heard stories of farms that split workers by language group in order to increase competition between groups. According to workers this had the effect of increasing divisions, and workers suspected that these tactics were an attempt to stop them from organising for better working conditions. It was clear that the role of this union was more important than ever.

On one hand the AGM felt necessary and relevant, on the other it felt stuffy and old fashioned. Members came together in a stale format, with a panel of older men reading series of formal proceedings, with the odd complaint from a member of the crowd. One of the topics on the agenda was the falling membership of the union. Membership remains strong, with over 25,000 members, but the trend is downward. It felt to me that the union lacked the vibrancy that comes with feeling like you are part of an organisation creating change. Without this feeling I can see why young people are not stepping up and getting involved. For such an important union this felt both expectantly familiar and puzzlingly disappointing.

The Bidfood Birmingham distribution centre is located on an industrial estate a short train ride from the city centre. The large, square warehouses of the industrial estate, some 10 stories high, had a constant flow of lorries moving in and out - from the UK, France, Germany and further afield. There were parcel depots, car manufacturers and waste disposal centres. From the outside this was not somewhere you would associate with food.

Bidfood is one of the UK’s largest food distribution companies, it has depots across the UK and over 4,500 employees. The Birmingham depot’s 77 lorries deliver 24/7 to schools, hospitals, care homes, caterers, retailers and restaurant chains in the West Midlands. 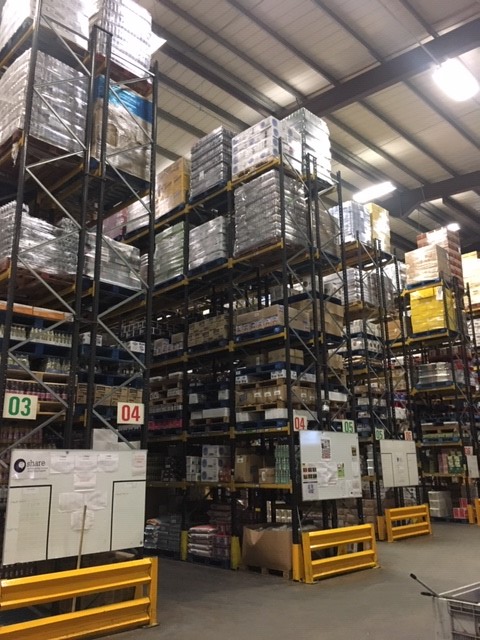 The inner workings of the warehouse were an intricate dance of incoming customer orders, deliveries, route planning, packing, haulage and distribution - all completely hidden to the consumer. Forklifts weave their way up and down aisles of pallets stacked six high - ambient, refrigerated and frozen. Trucks are packed and unpacked, bringing in food from across the continent and shipping it out across the country. Everything is kept for as short a time as possible, as warehouse space is an expensive overhead. The Birmingham warehouse has an 18 day stock depletion period. The higher demand goods would run out in just a few days.

This 24 hours a day, 7 days a week flow of food illustrates the ‘just-in-time’ nature of our food system. The scale and complexity is hard to comprehend. Systems like these feed our essential public services, keep our supermarkets stocked and ensure the country has access to affordable food every day of the year. With a system so reliant on a smooth, frictionless movement of goods from Europe, it is clear how disruptive a no-deal Brexit, with border delays and restrictions on goods, would be for this well choreographed dance.