Inequality in the age of robots

The incoming age of mass automation will make us poorer - unless we find a way to deliver ownership for all.

Lest we forget: robots are not taking our jobs. For all the hand wringing about automation, the death knell ringing thrice for doctors and nurses and plumbers in the economy of the near future – though HR executives, apparently, are destined to multiply - it is unlikely that the automatocracy will radically alter the quantum of jobs in our economy (at least in the medium term).

The arguments were admirably summarised by Benedict Dellot and Brhmie Balaram in 'Automation on our own terms', part of our Ideas for a 21st century enlightenment essay collection, which is well worth a read if you haven’t done so already.

But look, there is a problem: not that there will be significantly fewer jobs, but that the jobs we have will be worth less. All signs point to ‘the robots’ doing something rather more pernicious than simply taking our jobs: they will make us workers collectively poorer.

That was the message from John Van Reenen and Christina Patterson writing in the Harvard Business Review. Their work focuses on the performance of so called ‘superstar’ tech firms, the mainstays of the gig and data economy, though I prefer the term continent-corporations given these firms’ gargantuan size and reach.

While in absolute terms, wages at these corporations are higher than the rest, such wages represent an ever- smaller fraction of firms’ revenue. There is lots of profit per employee, so as such organisations become a bigger and bigger part of the economy, the overall share of GDP going to labour goes one way: down. This, indeed, is what we are seeing the world over, as the economy of the future takes shape before us.

The result is a worse than a future without jobs: it is a future of - excuse the crass construction, though anthropologist David Graeber is the trailblazer here - sh*t jobs. And if automation means more income flowing to capital over labour, we need to find new ways to remunerate and value employees for what’s left - for what’s left is actually the sine qua non by which the whole thing functions. 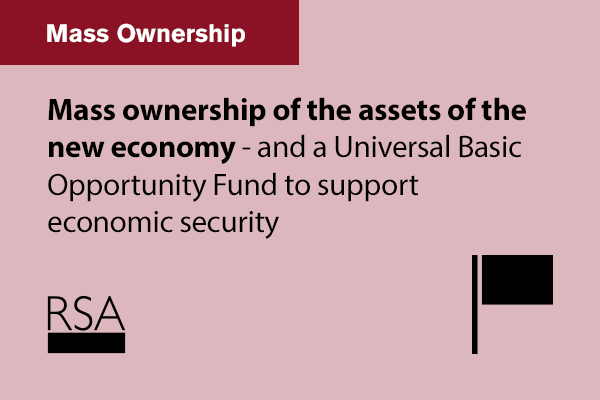 Mass ownership of the means of automation

This is one of the reasons why we (and others, including the late Professor Stephen Hawking, a former RSA fellow to boot) have begun to think about ownership – mass ownership of the bottom-up, fist-in-the-air variety – as a remedy to this problem. The premise? Give workers a stake in assets (the businesses and technology that are becoming ever more profitable, to begin with). Give them a stake in the machines that shape their future and give them back the control to shape those machines in turn. Make the robot the harbinger, not of dirge but of dignity.

Easier said than done, of course. Movement on inequalities of asset ownership in this country and worldwide remains staggeringly slow; the idea of turning workplaces and the wider economy into an institution, not of hierarchy, but of belonging, is an elusive one.

But the automation revolution is here and brings us a burning platform, as the consultants say. So could the ownership thing transform the destiny of workers, starting now? Possible, I reckon, in at least four areas.

First is through shares and other financial assets. Millions of us already have stakes in businesses deploying technology through our pension schemes or other investments (or as part of our pay packets if we work at tech firms). We could extend this policy. We could see shares allocated to as many workers as possible – hey, ideally every worker -  no matter where they sit in the organisation. This represents the beginning of a sort of universal enfranchisement by share option, which can be used to change the behaviour and practices of companies.

Secondly, through incentivising and encouraging employee ownership schemes. We might get serious about giving employees a directorial role in the company through board voting rights and/or adopting a co-operative structure. We would need to  build a mass movement of workers committed to this idea, using civil society organs like trade unions and activist groups to, in Albert Camus’ phrase, ‘bring the impossible from the unreal into the real.’

The real impetus for this will be leadership and data. On the former, beware the promises of politicians. They often promise an employee-owned revolution (Cameron, May, even Corbyn are guilty) but seldom deliver. On the latter, Professor Gar Alperovitz’s work and book ‘What then must we do’ is a fascinating romp around the world of employee ownership in the US and the attendant benefits when it comes to wages, conditions, wellbeing: the whole smorgasbord.

Meaningful change in working conditions, pay and greater joy in work are but some of the potential benefits. In theory, anyway.

Thirdly, through direct wealth redistribution and hypothecated wealth creation. The phenomenon of the continent-corporation affects, not only that corporation’s workers, but the shape of the whole economy. To use an alternative metaphor, in economic terms, they are like vast planets, bending gravity to their immense will. Mass ownership and asset redistribution cannot therefore merely be an artefact of corporate governance but must also be a policy goal for governments.

That’s why we at the RSA proposed a Universal Basic Opportunity Fund.

This is about creating ‘capital for all,’ delivered through a government endowment, and replenished annually with levies on wealth, profits and data transfers. It would be invested in infrastructure and global equities to pay out periodic dividends to every citizen (workers and non-workers alike). There are plenty of exemplars for such funds, from the Alaskan Opportunity Fund to Norway’s oil-funded juggernaut.

Other examples might be urban wealth funds, championed by Dag Detter, inter alia. These funds ‘sweat’ public infrastructure to create funds that pay dividends to citizens – of interest to countries and localities without oil reserves to turn into sovereign wealth funds. Pittsburgh has a pioneer vehicle. Why not suggest nicely that tech giants top these up too?

Fourthly, through incentivising and driving a culture of mass participation in asset ownership. While we’re speaking more broadly: ownership, the Michael Sherradens of this world suggest, is a habit, and the habit of ownership begets more ownership. From pubs to shops to clean energy generation, the idea that local values might align with local business and be owned by local people is finding concrete expression in many places. Consider, for example South West Mutual, a customer-owned bank established by RSA Fellows that will work for the benefit of savers who are based locally and will be owned by those savers too.

Encourage ownership, increase the presumption that the elements of our lives are collectively and democratically owned – and perhaps the hunger to apply those ideas to the workplace of the future will be irresistible.

Taking the ordure out of automation

One of the great challenges of our epoch is to inaugurate the automatocracy and the age of the continent-corporation while protecting and empowering the workers who make it all tick. The above is a fairly broad set of economic prescriptions to help turn this around.

Frankly, each area is worthy of a great deal of further inquiry, and they will need to be part of a wider intervention that safeguards the worker and workplace of the future. Our burning platform populated by hoardes of gurning robots is but one stimulus to consider these ideas anew.

In the absence of a grand global government-led break-up of tech companies not seen since Pangaea’s parting, mass-ownership is almost certainly a key to taking the ordure out of automation.

Taking my cue from Professor Hawking, I suggest that this a topic worthy of much further consideration. After all, while there will be times when we are poor and times when we feel sad, the last thing we need is a system that hard-wires ennui into our destiny.