My journey for the FFCC bike tour took me around a small corner of N Wales; a small country on a small island off the coast of a relatively small continent. But even within the small patch I covered, what struck me hardest was just how much variety there was in the land and the landscape.

In this area, as it is across the whole of the UK, the micro-variations in land quality are a strong determining factor in the future of land use and a reminder of the challenges facing the commissioners and policy-makers who are deciding on the future of food, farming and rural life. The people I met on the road regularly pointed out that this is both the conundrum and the solution: that policy becomes much more powerful when it harnesses local knowledge, rather than rides roughshod over it.

One of the places where this was most visible is Tyddyn Teg -  a 31-acre farm, nestled in between the mountains and the Menai Straight. Seriously beautiful country. The farm’s website explains that they are a cooperatively owned and run farm, using permaculture methods to supply the local community with food. On approaching the farm, it’s clear that its reputation has spread and it has become something of a pilgrimage site for those interested in learning about community-supported, sustainable, organic methods of farming. I’m greeted by volunteers from France, here to help for a couple of weeks, sat outside enjoying the morning sunshine and a relaxed start to the day, before getting to work.

The volunteers (one of whom turns out to be the brother of an RSA colleague – small world, eh?) help me find Alice, one of the founding co-op members, in her static caravan which appears close to being reclaimed by the land.  Its open doors and windows look onto farmland all around, emphasising the thin divide between outside and in. As I arrive, Alice is making herself a breakfast of eggs and leeks (both from the farm, of course) and we sit down for a cup of tea (not grown on the farm!).

Alice’s enthusiasm reveals that this is more than a farm – it is a political action, a challenge to acquiescence to consumer capitalism and unsustainable, dislocated approaches to food production:

"It’s hard to make permaculture work as a business. We survive because being a community farm is just as important to us... The bottom line is critical, but we don’t compromise our ethics: business will always come in second place to social and environmental concerns."

The farm shares the risk of production with consumers by operating a membership scheme; they keep their consumer base local (members must come to the farm to pick up their weekly share of the crop) and keep their prices accessible (in the summer the farm’s fruit and veg is 40% cheaper than in the supermarket, Alice claims). Alice is principled, but not fundamentalist about local food – the point is to encourage localism, cut down unnecessary food miles, not to enforce a local-only diet.  This even-handedness is persuasive - her concessions to middle-class food habits (Sicilian lemons and olive oil can be bought in the farm shop), far from undermining her argument, in fact draw you in closer to her point of view.

Alice is also very articulate about the ways in which government schemes are blind to the needs of individual farmers and the characteristics of their land, even when their objectives are aligned.

"The trouble with a lot of government schemes that they want you to engage with is that they don’t ask what you need. We could really benefit from help with microfinance: short term loans for buying machinery – that’s the kind of advice that would work for us. Instead, we have Farming Connect: a mentoring and training scheme for farmers and foresters, but what’s offered is mostly focused on livestock farming [which Tyddyn Teg don’t do] and it’s time consuming. It’s no good if the support you can access is support you don’t have time to engage with."

It's not surprising that Alice picks up on how the big picture thinking of governments can be at odds with divergent needs of individual farmers. The farm runs according to permaculture principles, an ethos which takes its cues for what to farm, where, by going with the grain of the local ecosystem and avoiding crops or livestock that would need excessive intervention to flourish. Permaculture pays attention to the detail: locating high-maintenance crops in fields near to farm buildings to save energy and time; planting herbs that house ladybirds next to other crops, to deal with the blackfly that might otherwise reduce yields; building homes for toads in the polytunnels, to eat the slugs. It’s the kind of philosophy that should sit comfortably with government schemes like Glastir’s Woodland Creation Grant. Unfortunately, for Alice, the rigidity of the programme means it’s another missed opportunity:

The programme objectives are about water management, combating climate change and biodiversity. We’re interested in all those outcomes, but also in the value of the woodland as a wind-break to help protect our crops, but there are stipulations that we had to plant slow-growing, native, deciduous trees. If we’d been able to plant faster growing, but non-native trees, we could have all been happier quicker… We also had to take on all the risk of the programme: finding the cash to buy and plant saplings at a difficult time in the year for cash-flow – January – before we could draw down the grant. This is disproportionately hard for smaller farmers. The fact that 5year survival rate [of saplings] determines whether or not we will have to repay some or all of the grant also seems an unfair distribution of risk. 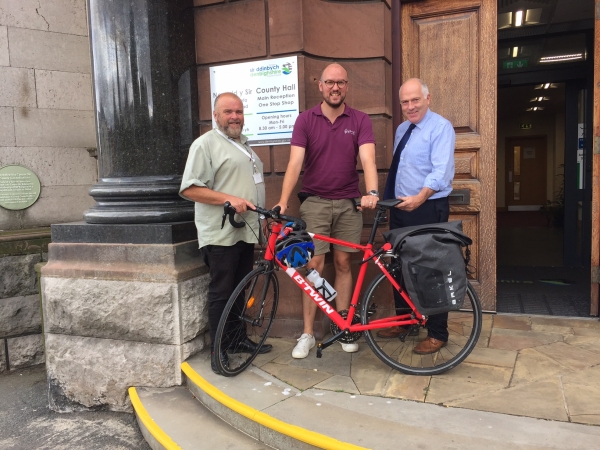 Everywhere I rode through in North Wales, the people I spoke to said that government policies and schemes too often overlook the lived reality of individuals intended to be their delivery partners and/ or beneficiaries. Time and again, I heard that the rigidity of policy (governmental or otherwise) was getting in the way of the system working more effectively for both farmers and the public good. I heard the case of a farmer prevented by the site of special scientific interest (SSSI) authorities from cutting a fire break across his land, resulting in a wildfire that could not be controlled and the loss of the habitat the SSSI was designed to protect. There were complaints that unions focus on their benefits to individual farmers, ignoring the importance of communities in sustaining a fully functioning rural economy.

This sense that policy all-too-often imposes strategies unsuitable for individual localities was expressed not just by the farming communities, but in the densely populated areas in these officially rural districts. Rhyl is one of the most disadvantaged parts of the UK; full of crumbling B&Bs and empty shops. The town centre has seen a string of grand projects fail to bring in the tourists . Its next answer? Building a huge new ‘Sun Centre’ (leisure pool) - aiming big in another attempt to make Rhyl a ‘destination’ town. It looks really fun and I do hope that this might be the one that works for Rhyl, but perhaps the town might benefit from something more like a permaculture approach to tourism investment: for the authorities to take a lead from the land and the local culture when deciding how to invest. The nearby caravan parks are thriving – people want to come to the area despite the absence of a big-draw attraction. I couldn’t help wondering whether small scale investment to support the hotel and B&B owners to improve their premises at least to the standard of the caravan parks, might be a better way to bring tourists into town and keep them there.

Cattle farmers in Ruthin, Denbighshire, told me “What we need is an agriculture minister who knows farming, who understands the job. There’s no connection between London or Cardiff and life here.” ‘Understanding the job’ isn’t limited to understanding the types, cycles and schedules of work; it’s dependent on understanding the land and its affordances and on understanding the cultures of people working it. Although this was only a small corner of a small island, the differences from one side of the mountains to the other; from comfortable, rural Ruthin to impoverished and troubled Rhyl (both in the same administrative area) and from field to field at Tyddyn Teg were pronounced. Negotiating these micro-variations requires a mindset that RSA colleagues have described as ‘system entrepreneurship’: adapting to complexity by recognising and harnessing the power for change that is jointly held by authorities, communities and individuals.

My trip to Wales showed me the lost or diminished opportunities where one-size-fits-all approaches are attempted. It also showed me the opportunities inherent in policy-making that enables and empowers, that builds on collective and individual motivations, and their knowledge of the affordances of the land.