2018 was a year of political turmoil and rising cultural anxiety. In times like these, there’s an urgent need for clear thinking and good-faith debate. Across our events and podcasts this year, we’ve tried to shine a beam of light through the fog, creating conversations where the big ideas and questions – “who are we?” “where are we headed?” – can be explored, contested and freely shared.

All of the RSA’s public events are available to download as podcasts, and this year we also launched our political podcast Polarised, in which Matthew Taylor and Ian Leslie investigate the forces driving us further apart. That’s a lot to choose from, but here’s a playlist of our 11 favourite RSA podcast episodes of 2018 – enlightened thinking for what can often feel like dark times – plus three of our favourite listens from elsewhere.

Time's Up! A Movement for Change – RSA Events

The global #MeToo movement grew and evolved in 2018 as here in the UK we marked 100 years since (some) women were first given the right to vote. There’s clearly still a lot of work to be done to give all women a voice in tackling systemic injustice, and battles yet to be won in the fight for women’s social and economic empowerment as well as protection from abuse, but this was a powerful, optimistic Time’s Up panel, featuring voices from the frontline of change.

Doris Kearns Goodwin and Jon Snow joined us for very special conversation about the strengths, weaknesses, and human quirks of four iconic US presidents. From Lincoln to LBJ, these leaders faced dark moments of self-doubt, failure, and crisis. But, thanks to their distinctive personal attributes, and a guiding sense of moral purpose, they ultimately succeeded in bridging divides to achieve epochal social change. The question looming over the session was, of course: are today’s political leaders up to the task?

Anger – sometimes righteous, sometimes misplaced – has been one of the themes of the political year. But are we now too driven by feelings rather than by cool rationality? Claire Fox explores the politics of outrage, while writer William Davies tells the story of the Oxford Circus panic last winter, and what it tells us about the important role of feelings in politics.

The RSA isn’t just a place for the big public debates of the year – it’s also somewhere you can hear from leading researchers on what makes us tick. To understand the world we first have to understand ourselves. Here, RSA Animate favourite Dan Pink showed how an understanding of the psychology and biology of timing can help us make better decisions at optimum moments...

...and here, Daniel Coyle shared the secrets of building a successful team, and what you need to know about individuals to make group cooperation effective.

Jordan Peterson was relatively little-known outside of his niche online audience when he spoke at the RSA in January. But since then he has become one of the most talked-about and controversial public thinkers of 2018. This probing, challenging conversation with the philosopher Jonathan Rowson is well worth a listen.

Peterson isn’t the only figure to emerge from the dark side of the internet – on the RSA’s politics podcast, Polarised, we asked one of the leading experts on internet culture, Whitney Phillips, whether online trolls have hijacked the White House.

On Belonging And Brit(ish)ness – RSA Events

There’s been a great deal of public conversation about ‘identity politics’ in 2018, and in this talk captured at our annual visit to Wilderness festival, writer and broadcaster Afua Hirsch shares the story of her own upbringing and what, for her, “Britishness” means in contemporary politics.

We continue to reckon with the role of social media in our lives, and the role of big tech companies in our culture and politics. But are we right to be worried? In this episode of Polarised, Ian Leslie explains why we should be sceptical about the power of Silicon Valley’s ‘persuasion machine’.

It was a vintage year for expert insight into democracy’s discontents. In December, the world’s leading political philosopher Michael Sandel guided us through the failures of technocratic liberalism and the troubling rise of disenfranchisement, disillusion and the politics of humiliation. A powerful message of what needs to change to renew people’s faith in democracy to serve the common good.

A bonus conversation between Michael Sandel and Matthew Taylor about how to heal our political discourse will feature on Polarised on 3rd January.

And finally: our annual whistlestop Review of the Year managed to capture many of 2018’s key topics and trends, from Brexit to belonging and beyond. Our panel’s lively debate ended on a note of agreement – that we need to see our challenges clearly and yet refuse to let ‘troubled times’ narratives paralyze us. We can seize moments of turbulence to build movements for positive change. 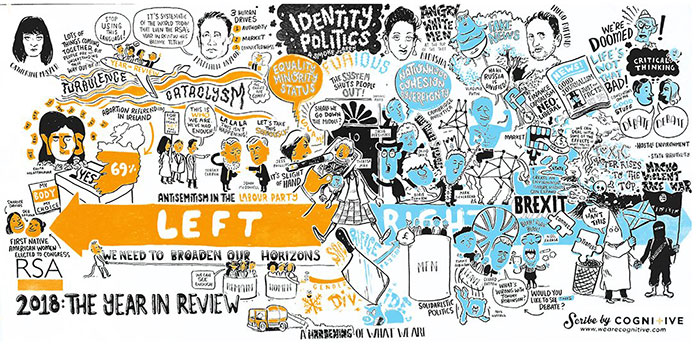 The RSA Year in Review, scribed by the fantastic Cognitive Media.

We can’t end this list without recommending three staff favourites from outside the RSA:

The RSA Events podcast and Polarised are available on Apple Podcasts, Spotify, and all major podcast apps. Sign up to our RSA Events newsletter and follow us on Twitter, Instagram and Facebook to get all the latest news on new events, videos and podcast releases for 2019.