The next annual UN climate conference – COP 24 – begins today and we need decisive action to come out of it. Ramping up our efforts has always been an imperative but given recent developments in our understanding of the magnitude of the problem this is more urgent than ever and demands big thinking.

Last month the UN’s climate science body – the Intergovernmental Panel on Climate Change (IPCC) – warned that we have only 12 years to limit the worst effects of climate change. This, for many, has been a wake-up call. As the IPCC put it, global CO2 emissions “need to fall by about 45 percent from 2010 levels by 2030” in order to avoid climate catastrophe. That is a monumental task, and one we cannot afford to fail at.

When it comes to solving climate change, groups of different stripes take up distinct and often oppositional positions – even if they agree on the need for urgent action. Innovative policies need to speak to all of these groups. As we’ll explore later there’s a recently announced national policy that could do just that – one combining climate action with a universal basic income. The recent carbon fee and dividend policy that’s just come out of Canada, which we’ll go into later, is an imaginative and (probably) very effective way of speaking to each and every broad approach to action on climate change. These camps can be broadly divided into three. These are based on the active modes of cultural theory – ideas summarised here by Matthew Taylor – and what we need are solutions that combine all of these, even if that balancing means some challenging thinking.

The first of these three approaches to tackling climate change is made up advocates for hierarchical top-down change. This group pushes for purposive and coordinated action from bodies like the UN and IPCC, taking the view that intervention is a necessary medicine. This is true on an international basis, fuelled by a belief that many individual governments, often driven by economic incentives, don’t have the ability or desire to act unilaterally – at least not to the extent necessary to avoid ecological collapse – so need additional oversight. Within the nested structure of standalone nations, domestic governments need to enforce changes in the economy in a similar way. These hierarchically-minded activists lean heavily on institutional law-making and rule enforcement, primarily based on the advice of experts – whether scientific, economic or legal.

The second approach to climate solutions, the solidarity approach, leans on our collective duties to nature and each other. This group calls on citizens – particularly in the global north, where per capita consumption is highest – to actively reduce emissions. Advocates of this approach also call for the equitable redistribution of resources to those countries most likely to bear the brunt of climate change, countries that also lack the financial and institutional capital to develop economically without drastically increasing emissions. These countries are also the least responsible for causing the problem, by a long shot when you factor in historical pollution. For this cohort it’s fundamental that environmental and social justice be kept front and centre in any policy to tackle this complex systemic issue. Solutions need to be domestically and internationally progressive, with the burden of finding, enacting and paying for them falling on the shoulders of those most responsible.

The third ideological approach to solving climate change comes from a group we’ll call the individualists. This camp believes in innovation and market incentives. Tweaking tax and spend could better account for what they see as the ‘negative externalities’ or unwanted side-effects of economic activity. This might take the form of carbon taxes or trading, making prices better reflect their embedded carbon so that consumers are pushed in the direction of wise choices. Some in this group are against intervention of this kind, however. Their stance focuses more heavily on technological innovation as a core pillar of a collective solution to the problem; essentially “we are an innovative species and technology will save us”. Efficiency savings from better and cleaner tech, like the massive recent emissions reductions from the closing of coal-fired power stations in the UK, and emerging technologies like carbon sequestration (sealing carbon dioxide in the ground) and concentrated solar power are, according to this view, pivotal answers to the climate crisis that could solve the problem without too much government intervention.

These groups aren’t necessarily mutually exclusive. Even though most people identify more with one camp than another it should be easy to see that elements of each can be complementary. People can – and do – rally around more than one of these positions, and indeed we should. But these stances are so regularly portrayed as standing in direct opposition, competing for attention, that the success of one group is often painted out to be or even experienced as a failure of another. Combining all three, which should be the aim of balanced and resilient policy with as universal buy-in as possible, is surely the preferable pathway to success.

Over recent years an exciting proposal has captured the imagination of certain influential circles that – if delivered in the right fashion – could effectively combine all three camps. This would apply to high-income, high-emissions nations, which is fitting given that the global north has historically emitted more than anyone else. This idea is the Carbon Fee and Dividend, one that has been supported and championed by many venerable individuals and institutions over recent years. The litany includes James Hansen (a prominent climate scientist, previously at NASA), a star-studded collection of Republican and Democratic bigwigs, the Citizen’s Climate Lobby and (controversially) ExxonMobil and Shell in the US; Policy Exchange and, tentatively, the Green Party in the UK; and recently – following much speculation – the Canadian government.

In its purest sense the carbon fee and dividend is a tax on carbon, usually at the point of extraction or port of entry into the country, the revenue from which is then paid out equally to all. The cost of the fee part is passed down to the consumer, which raises the price of all goods and services in line with their embedded carbon emissions. Richer households generally consume goods and services with a higher level of embedded carbon so would end up, in absolute terms, paying more. However, on its own this would be fundamentally regressive – like VAT – in that those on the lowest incomes would lose a larger proportion of their income (even if it’s less in absolute terms) than those in the richer income deciles.

The next step in the process, which makes it economically progressive, is the dividend. The revenue from the fee would be paid to all, equally. This is essentially a version of a universal basic income (which the RSA has done much work on), an unconditional cash payment made regularly and individually to all citizens, which isn’t withdrawn as earnings rise. The idea has been linked to issues including decreases in poverty and inequality, an increased sense of freedom and agency, and increased wellbeing and economic security. In the context of a carbon fee and dividend, even with the fee portion, such a basic income would be strongly progressive (on the assumption that it’s not taxable and doesn’t interact with other benefits). The distributional impact of the policy, by income decile, is laid out below (source: Policy Exchange). 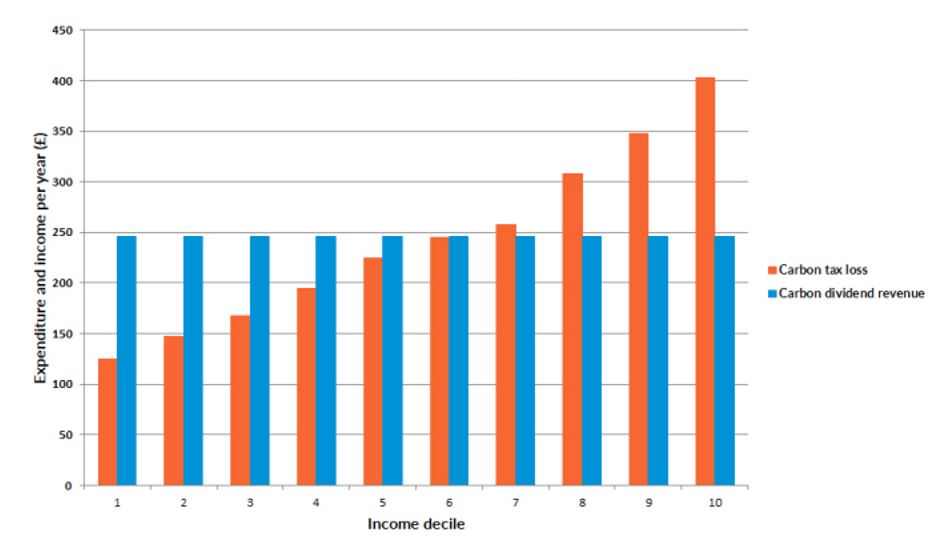 Importantly, as a response to climate change, the policy hits all three groups’ focuses and goals. The hierarchy camp gets its dose of expert-led policy delivered by the state and the levels of fee and dividend could change over time, reflecting the need to meet different carbon targets. The solidarity group would get its fix of progressive redistribution, based on income and emissions, whilst also providing a basis for reduced consumption of high-carbon goods in the global north. Finally, the individualism group would have its desire for internalising negative externalities fulfilled, providing a more accurate pricing system for the market.

The Canadian Government’s introduction of the idea – the Greenhouse Gas Pollution Act – is the first in the world and comes at an opportune moment, given the imminence of the UN climate talks. The imaginative policy is essentially a carbon fee and dividend – a combination of climate policy and a universal basic income - setting a $20 tax per tonne of carbon, rising by $10 every year, and redistribute 90% of the revenue to citizens. The scheme is projected to provide a net-benefit for 70% of citizens and have a significant impact on emissions. This landmark policy could have considerable international ramifications.

It is exactly the kind of innovative law-making we need in the wake of recent revelations on the increasingly precarious state of our climate. If we are to stay within safe limits, as the IPCC put it, we need “rapid, far-reaching and unprecedented changes in all aspects of society”. If we have the option to deliver that with buy-in from all three camps (and therefore large swathes of society), all the better. Finding policies that work on multiple fronts are the kinds of systemic interventions that could massively contribute to solving the crisis and transition to a different and more sustainable economy. The parties at COP 24 need to take this on board. Radical, effective and widely supported policies need to take centre stage. A Carbon Fee and Dividend is undoubtedly a prime candidate.