Riding the Winds of Change in Monmouthshire & Powys

I had little idea what would await on the road for the Food, Farming and Countryside Commission. I love cycling, food and meeting new people, so I headed to Wales with a heart full of excitement and belly full of anticipation. It was a trip of two stories, which might be spoiling the tale in advance: One characterised by concern as communities continue to feel opportunities are diminishing, the other a tale of hope and optimism that the times, they are a changing (for the better).

On the first morning I rode from Abergavenny to Glasbury. It is a beautiful ride and I was hit with the full gamut of weather that you would expect from Wales in a 100-minute cycle. I arrived early to The River Café and witnessed the beginnings of the weekly coffee morning held there. Over the next 10 minutes a total of 13 elderly residents of Glasbury arrive to sit down and spend the next hour and a half chatting to each other. There is a real sense of community spirit amongst the group and I’m told that they are to be found there without fail every Wednesday morning.

The River Café opened 8 years ago, Jane Hughes who runs the café started on the site 13 years ago with a canoe rental business (which is still thriving) and added to the site four years ago with a bunkhouse. I get a mixed picture about the area from Jane; tourism is positive and has changed for the better in recent years. An influx of capital to the area with people buying houses for holiday lets has meant the standard of accommodation has increased, and with this business has become more predictable and profitable.

However, the flip-side to this is that house prices have escalated to the point that locals are struggling to buy property in the area, and people who might have moved for work are being priced out. The business really struggles to fill vacant roles with employees that are keen to build a life in the area, something that becomes a theme in the area. Jane tells me of a recent situation where two members of staff who wanted to work more would lose their housing benefit if they did so, meaning they are trapped in a cycle of part-time work and Jane struggles to fill her rota. The precarity that is entrenched through the punitive and tangled structure of the social welfare system is having a real impact on her business.

The difficulties faced in the labour market is not restricted to the catering industry here. I met two teachers who described a very similar situation in the local schools, who thought the cost of housing and lack of opportunities for a spouse that might accompany a teacher moving to the area was a significant reason for the teacher shortages.

In Powys house prices have more than doubled over the past 15 years, while wages have increased by less than half that amount. The people I spoke to made it clear that the implications of this are perhaps deeper than is often recognised. 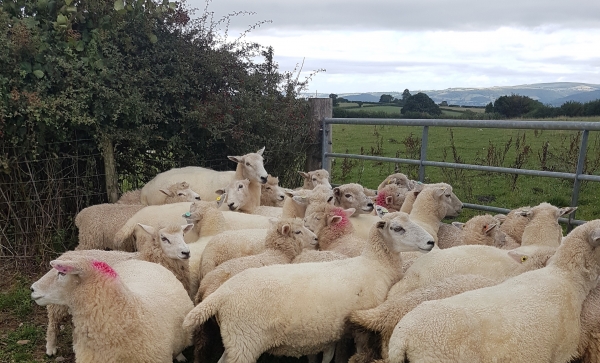 This extended to the steel fabricators in the village of Ffynnon Gywyndd – where the business has been with the Ricketts family for generations. At this point they find it hard to source young people who have both an interest in training to be steel fabricators and stay in the area. There was a real feeling that this generation would be the last to keep the family business alive. It was hard to escape from the feeling that this pocket of Powys was struggling to reconcile competing interests across generational divides.

The afternoon changed this perception somewhat. I met Becky and Hal Drysdale who have moved relatively recently to a smallholding in the area. They are not from Ffynnon Gywyndd or Glasbury, they have come from much further afield, and they are keen to show that farming at a small scale can be a profitable business. They know it will be tough with 30 acres, they’ll ideally get another small plot of land, but they are committed to raising cattle and some sheep in a sustainable, pesticide and chemical free environment. This was the first time in the day I met people pushing against the margins of what has felt like an entrenched narrative in the area.

Hal and Becky spoke of plans to bring ownership of food processing and storage under a collective banner to provide more bargaining power and increased efficiencies to small farms locally, advantages usually reserved for larger farms. They said they drew inspiration from French and Italian farming, where the cooperative model is far more prevalent - they remarked that this type of collaboration through formal structures was ‘not particularly British’. Throughout our UK wide tour we have heard of informal networks of resource sharing that are well established in the countryside here but it is interesting to note that when it comes to formalised cooperative structures there is much scope for innovation.

Should things stay the same?

My final stop of the day took me to Hay-on-Wye, just over the Welsh/English border from Glasbury. I met Catherine Hughes, who spends a lot of her time chatting to the farmers working on the common land outside of Hay for the Sustainable Management Schemes.

Her early conversations with communities that she works with often start with “what do you want your community to look like in 50 years?” Almost always the answer is “we want it to stay the same”. This feels like the conversation many people in Glasbury weren’t having. In Glasbury, there was an acceptance that things couldn’t remain the same and real uncertainty about how to tackle the problems now that were only going to exacerbate over the coming generations. Despite the fact that Catherine’s conversations with farmers can be very challenging, the fact that they are happening and are finding a new way forward created a sense of hope.

It was this hope that propelled me (read: crawl at snail’s pace) up and over the Hay Bluff to spend a morning with Jeremy and Katrina Gass – who spend a large amount of their time working for food justice in Abergavenny and the surrounding region. The quality of their collaborators spoke to their remarkable effort in bringing multiple strands of local people power together. The County Council have endorsed the Manifesto for Food Justice in Wales produced by the Abergavenny Just Food Group, and the Abergavenny Food Festival are supporting them in their production of a Fringe festival. This keen sense of mission around tackling food poverty in the area and reaching the hardest to reach with their work was inspiring and a welcome contrast to my morning experience from the day before.

Jeremy and Katrina spoke of the area experiencing a resurgence of younger people who had left now returning. The evidence from their perspective is, of course, only anecdotal but it perhaps points to a broader trend. One reason for this could be the popularity of the Abergavenny Food Festival, which for one weekend a year brings a huge number of food producers from across Wales and the world to Abergavenny. Aine Morris, the Chief Executive of the Food Festival, spoke of investment in the people of Abergavenny to increase the impact the festival has outside of its September dates. A new Food School that gives focused training and opportunities in the food sector to 18-25 years olds is in its pilot year, a tangible example of investment in the younger generation.

I took from this trip a feeling of hope. When the conditions are right, it is eminently possible to run a thriving business focused on social and ecological outcomes that doesn’t need to be curtailed by the traditional demographic constraints that an area faces. Wales left me with the feeling that despite the mix of demographic, funding, systemic, ecological, historical and educational pressures facing communities, a more sustainable and just future is out there, with some paving the way for others to reach out and grab it.