The world of work is changing. Gig platforms are atomising labour markets and new technologies are automating jobs. Many fear these trends will deepen economic insecurity. But the Future Work Award winners show that we can work with the grain of these trends, harnessing the benefits of flexibility and technological disruption without forgoing security in the process. 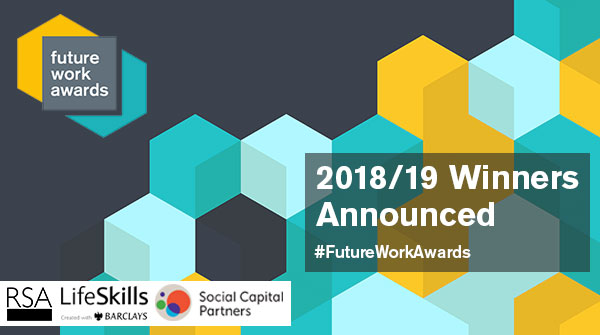 After 9 months of research we identified over 400 applicants for our inaugural Future Work Awards. Today we announce our 28 winners. Here are four things we learnt from our global search [view the winners map].

We need to think beyond top down policy change

Predictions about automation suggest that low income and blue-collar workers are most at risk. While new jobs will be created in the tech sector, too many people lack the skills needed to take advantage of these opportunities. The need for better lifelong learning is one of the most repeated mantras in future of work debates. But while the Government is in Brexit paralysis mode there seems to be little scope for strategic policy change here.

Meanwhile our Future Work Awards pioneers are demonstrating how workers can transition into jobs of the future. Pursuit, a tech training program based in Queens, New York, has enabled hundreds of workers from low income communities to become successful computer programmers, raising their income from $18,000 to $85,000, on average. Pursuit is funded by social impact bonds – where investors provide capital and receive a financial return based on job outcomes for participants.

Zero hours contracts and the emergence of the gig economy have also captured the zeitgeist. Their rise has been dramatic in recent years. Alongside a 5-million strong contingent of self-employed freelancers, contingent workers now account for a significant part of the labour force.  Eschewing a 9 to 5 can bring freedom and flexibility but these workers lack important protections such as sick pay and pension contributions.

The government has signaled its intention to beef up their rights, embracing 51 out of the 53 recommendations from the Taylor Review. But they were slow to do so. And there is plenty of scope for further action. Universal Credit needs to be reformed and the self-employed deserve better protections against late payments.

Our pioneers are also working to plug these gaps. SMart is a co-operative for freelancers, with 100,000 members across 9 European countries. Members gain access to a range of support services, including a salary guarantee fund that pays its members within 7 days. FinTech tools such as Portify also starting to emerge that leverage open banking to provide gig workers with alternative credit scoring. Portify has worked with platforms to reach 30,000 users, offering them a range of financial services, including emergency credit when their bank balance runs critically low.

The impact of our pioneers reminds us that if we want to enable good work across the board, we should think not only about changing public policy and employer practices, but also supporting grassroots innovation.

Hi-tech, low-tech, and no tech solutions are the future of work

AI is becoming synonymous with automation, but our Future Work Awards pioneers show that this technology can also be used to help people find good work at scale. Bayes Impact have developed Bob, an AI chatbot that leverages big data to give job seekers a personalised assessment of their unemployment situation. Since launching in 2016, Bob has provided coaching to more than 150,000 jobseekers in France.

But ‘low tech’ innovations are also transforming people’s lives. Mauqa Online, identified as a ‘One to Watch’ for 2019, is a gig economy platform for disadvantaged women in Pakistan that overcomes illiteracy barriers by using audio commands on simple (without internet) phones.

And much of the social innovation recognised in this year’s awards uses no tech at all. IWGB has been able to make an impact in the gig economy, where traditional unions have struggled, not because of a flashy app but because of its devolved model which places decision making power directly with workers.

One trope from the wider pool of applicants was bold claims about using hi-tech solutions to solve social problems, but little explanation of why AI is necessary or even useful for solving that problem. Similarly, most claims to ‘a blockchain for X’ are yet to show any signs of having traction with users that count. We tried not to get too distracted by this.

These solutions can go mainstream

The Future Work Awards is in part an attempt to better understand a nascent field of innovation – one that overlaps with FinTech, EdTech, WorkerTech and so on. Many of these projects are no more than start-ups. At the front of their minds is the question of how they will develop viable business models, that can be sustained through selling their services or generating membership dues, as opposed to being reliant on frequent injections of grant or VC funding.

But this is easier said than done, especially as so many focus on precarious workers, who are unable to bear the brunt of the costs of the support they might need.

One interesting example here is Workit. Originating from campaign group OUR Walmart, Workit leverages AI to augment the expertise of trained advisors and provide low wage workers with information on their workplace rights. With over 15,000 users, Workit became a key tool in a campaign that resulted in Walmart now paying family leave for over 500,000 women. Workit is kept afloat by diverse revenue streams, including contributions from philanthropic foundations, membership fees from OUR Walmart, and from licensing white label software in Australia. It has been able to broaden its reach to support workers in other sectors, including cleaners and teachers, through partnerships with trade unions across the US.

Looking forward, we hope that projects in this field will start to complement each other and create complete end to end solutions for people. As workers of the future look to navigate the shifting sands of the labour market, they could use a platform like Bob, which recommends they participate in a program like Pursuit. Gig workers could turn to a suite of innovations, from FinTech tools, to co-operative organisations, and new avenues for worker voice, that will enable them to strike a better balance between security and flexibility.