We live in an era of growing precariousness and poverty for our nation’s workers. Despite record levels of employment, over 7 million people in working households live below the poverty line. Workers across the piste have seen their earnings decline. Flexible contracts, the rise of gig work, and an unfit-for-purpose welfare system are but three reasons more of us face an uncertain future.

The result of these challenges is a rising ride of economic insecurity among people of all ages and all backgrounds. And if we’re going to get to grips with this problem we need not only policy but action.

Readers of this blog will recall that at the RSA we define economic security as the confidence someone has that they can maintain a decent quality of life, now and in the future. It is about a person’s capacity to plan their life and the role that work plays in that planning.

Economic insecurity impacts a broad spectrum of society – not only those in persistent and structural poverty and precarious economic circumstances, but also those in low and middle income groups. It includes those who self-identify as ‘just about managing,’ those whom the Government labels as ‘ordinary working families’. Feelings of economic security arise in parallel to issues in the workplace and the labour market, and also encompass psychological and social pressures incumbent on households, communities and places. Addressing economic insecurity, therefore, is a multi-faceted challenge. 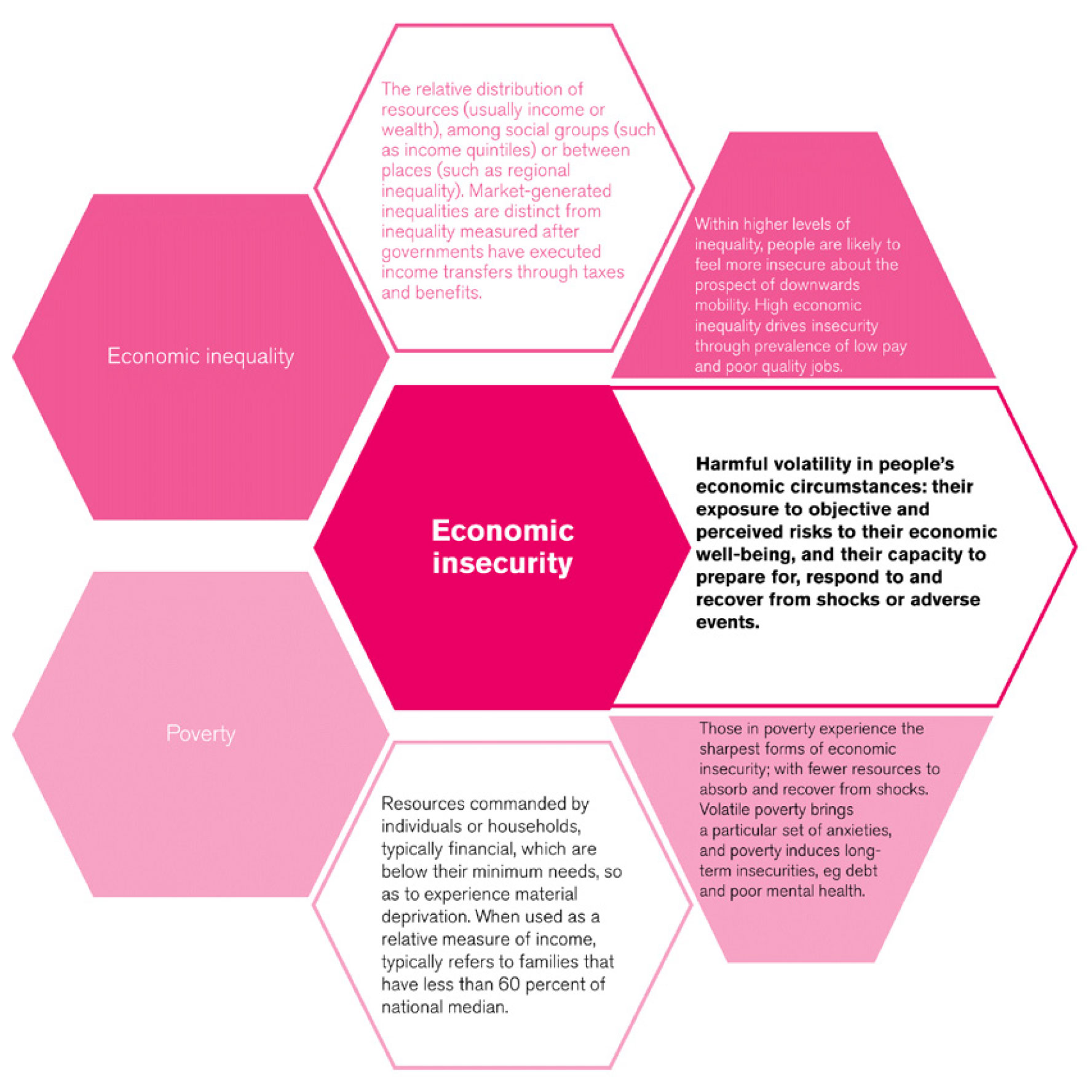 The RSA, Economic Security and The Future of Work

In the RSA’s Economy, Enterprise and Manufacturing team we have been thinking about how we bring together conversations on economic insecurity with our major ongoing inquiry into on the Future of Work.

There are some touchstones. Our work on the gig economy - its upsides but also its immense challenges - sits alongside our Chief Executive Matthew Taylor’s influential Review into Modern Working Practices for Theresa May’s government. The Future Work Centre is considering both the immediate future of work and also the broader social contract that undergirds the wellbeing of workers. Consider the following intersections of economic security and good work:

What we know for sure is that multi-faceted problems like these won’t be solved on paper. February 2019 brought the RSA’s Future Work Awards, which platformed 28 vanguard initiatives from around the world that seek to build a better future for the workers of today and tomorrow. Undertaking this massive global exercise showed us the sheer breadth of solutions to this burgeoning crisis, all of which are driven by social entrepreneurs working in the field.

Can we work collaboratively to help a cohort of organisations like these bring their various skillsets of the challenge of addressing economic insecurity? That, precisely, is what the RSA, in partnership with the Mastercard Center for Inclusive Growth are trying to do with our Economic Security Impact Accelerator.

We are supporting a cohort of promising projects that promote good work and robustly support economic security in the UK. Some offer an innovative approach to sick pay, others build worker protection, or tackle low quality housing or financial exclusion. The accelerator is designed to drive their impact. It is part boot camp, part research inquiry, part impact-driving-programme. It will be delivered by an enduring network of peers, partners and collaborators, dedicated to changing the world of work for the better.

We aim to act collaboratively, think publicly and grow both our individual and collective impact through an intensive collective learning programme, supplmented by our research on the economy, economic security and the future of work.

Best of all, we have assembled an incredible group of pathbreaking social initiatives to help grow and build this movement, many of whom, were Future Work Awards winners, all of whom are making a huge difference already.

Find out more about the Economic Security Impact Accelerator

People who care about making a difference are often guilty of putting on blinkers, thinking only in terms of ‘what government can do’ and top-down change. With the launch of this accelerator, the Future Work Awards, and other practice-oriented initiatives to be announced, the RSA Future Work Centre is entering an exciting new stage; pinpointing and nurturing the best thinking and shaping the emerging ecosystem for the next generation of good work innovations.

The success of such initiatives must form part of any meaningful response to the challenge of economic insecurity and the promise of a future of good work for all.