Can love and humour help us face difficult issues and avoid polarisation? Philippe Valdois FRSA reports back from a humorous Fellows meet-up in Tokyo on Valentines day.

Unmitigated love or distaste for one's own country of residence or birth is, fortunately, a rarity, but few could deny there is often a love/hate relationship at play and that when discussing serious issues, tempers sometimes flair, giving the impression that there is no middle ground to be found. RSA Fellows know well that polarization is in itself a major issue. A paradigm shift is therefore necessary when dealing with current events or facing hardships if we want to strike a balance between reason and emotions. If searching for solutions to issues can be a worthy mental exercise, it will not be enough to alleviate the angst brought on by our inability to solve societal problems as individuals. This is where humour can help.

Our Fellow Michael Kato, CEO of Japanese Greats, K.K., is no stranger to searching for and finding innovative solutions while dealing with major issues, having being involved among other large-scale projects in the reconstruction of the Tohoku region after the earthquake and tsunami of March 11, 2011. 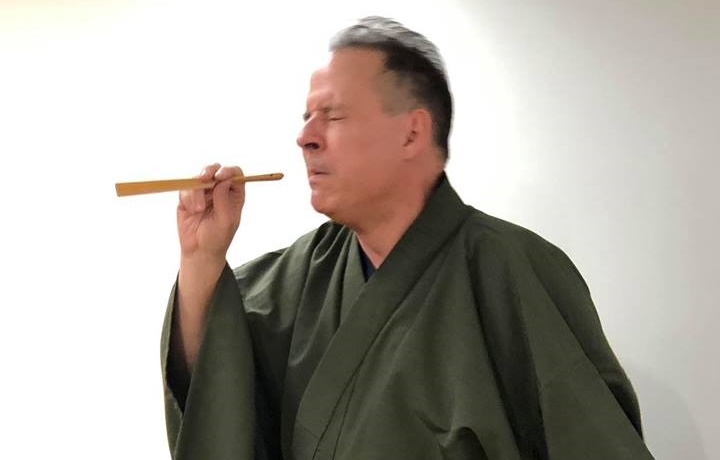 He opened the evening telling the more than 30 Fellows and guests present how a funny conversation about serious issues in the Fall of 2018 had given him the idea to organize an event on the theme of "Facing Japan's difficulties with love and humour." Valentines day was the perfect opportunity to add a zest of love to the evening. And as for humour, to start the evening in the right mood, there was Rakugo.

Michael Kato mentioned Western and Eastern traditions where satire could be used to deal with serious issues. But satire was not and is not the privileged domain of the highly educated gentry. In Western culture, there was also the medieval jester. In Japan there are Kyogen and Rakugo. Those arts could be considered as shominteki, or popular or folk forms of entertainment mostly appreciated by the working class. In fact Kyogen was/is usually performed alongside Noh theatre, offering a contrast between the commoners' forms of expression and those of the nobility. What the jester tradition, Kyogen and Rakugo had in common is that they sometimes made fun of the nobles. 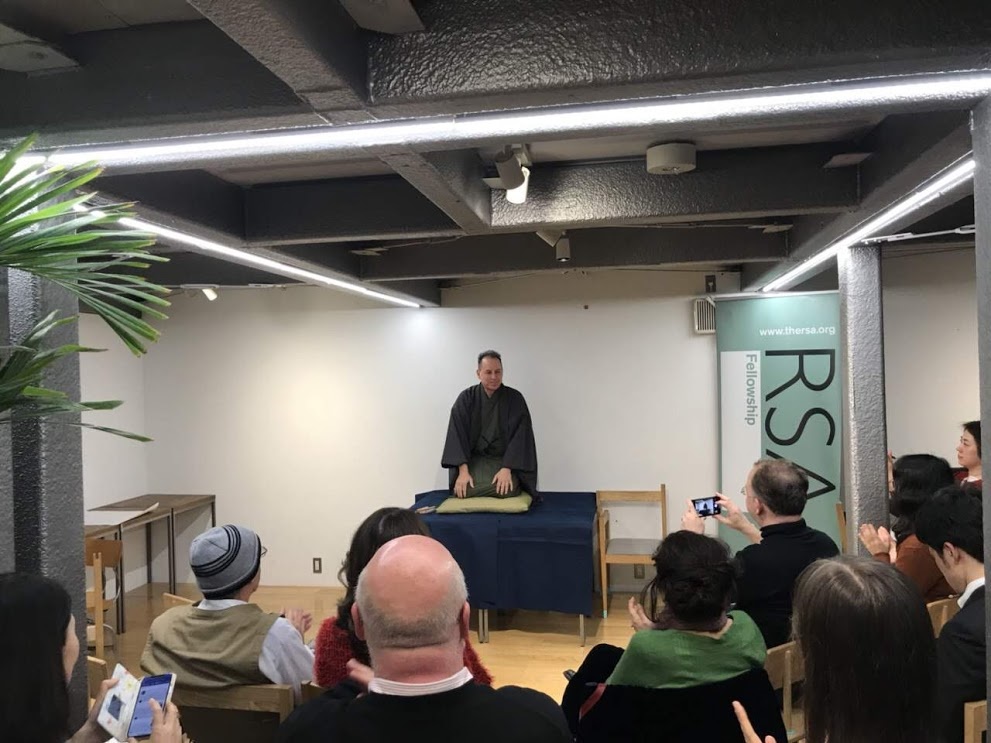 Michael Kato then introduced Azby Brown, a published author, expert in Japanese architecture and carpentry and Director of the Kanazawa Institute of Technology, who is involved with him in the activities of Safecast, a "global volunter-centered citizen science project working to empower people with data about their environment" that emerged following the Fukushima nuclear disaster.

As an amateur Rakugoka, he delighted us with a tale in English entitled "The Yawning Lesson". And if this performance did not include a strongly worded attack against all evils of society it certainly put us in the right mood for the lively discussions that were to follow.

After forming small groups including members of various nationalities and from different age groups, we started talking about various issues facing Japan. Time constraints made it difficult to debate as much as we would have liked but we were able to learn from each other. A teenager can see things from a perspective different from that of an older person, for example. Before the presentation of the results of our discussions, Michael gave us an example of Omotenashi, a concept that depicts a somewhat extreme sense of hospitality. It is difficult to castigate a sense of hospitality. But it can be overwhelming and be viewed as an attempt to please those providing it more than those receiving it. He told us how the futons were prepared for the hotel guest, occupying all the space in the tatami room at a fixed hour, leaving few options to stay up late and have a drink in one's own room. The laughs from the audience, including from those of us who had experienced such pressure, in Karaoke bars, for example, with what could called "forced entertainment", or in restaurants when we are directly given a hot wet towel while making a phone call, proved that we could have fun by looking together differently at what we see as mildly annoying daily occurrences.

However, some problems we debated were not negligible. Some very serious issues facing the younger generation or women in Japan, for example, had been chosen as themes. Going one step further, we were able to identify a few underlying societal problems having to do with how public opinion is formed in Japan. It begged the question of how far the concept of harmony should be applied and if public opinion did not reflect too much, in fact, the desiderata of the powers that be.

Before we were to part, I was left with one question. Is it always feasible to approach issues "with love and humour"? There are some taboo subjects and some of the issues we had covered would be difficult to joke about. Nevertheless, I left with the certitude that debating without any preconceived idea, casting an ironic gaze on problems we cannot always solve (a touch of humour) and recognizing the good where it is (a touch of love), can immunize us against our darkest and most impulsive and unproductive reactions. Later on I found in Safecast's web site some interesting similitudes in terms of methodology. Gathering a large volume of data, while remaining nonjudgmental, and welcoming the arguments of others with an open mind are the marks of a reasonable and enlightened person and the necessary steps towards formulating a sound opinion.