RSA Connector Alexandra Krawiec reflects on the first of three lectures she is organising in Poznań, Poland. Three talks on three different topics with respected scientific experts designed to provide an opportunity for the public to listen first-hand to the facts in a time of misinformation and widespread dissemination of confusing messages.

Questions about the Future lecuture series:

When every month counts, false beliefs and biases spread around the world by climate change deniers slow down actions undertaken by conservationists. In light of the short-sightedness displayed by some of the world's leaders, bottom-up initiatives seem as important now as the suffragette movement of the 19th century, or anti- racial segregation acts of the 20th century. With the US president reinforcing a “Winners Take All” mentality, and with the lack of cooperation in the Paris Agreement , organisations like the RSA have a very special role to play.

As many of you know, this year’s annual World Economic Forum meeting in Davos was preceded by COP24, which took place in a mining town of Katowice, Poland. In the light of these two recent events, Polish Fellows, supported by the RSA's Global team, have initiated a series of events under the common title"Questions about the Future". The events are being organised together with the Poznan Society for the Advancement of Arts and Sciences (PTPN) and are held in the PTPN historic building.

The goal of this initiative is to provide an opportunity for the public to listen to first-hand reports from experts respected in serious scientific circles. We found this approach particularly adequate in the time of misinformation and widespread dissemination of confusing messages. The first talk focused on Climate Change Impact on Europe, and was delivered by Professor Zbigniew Kundzewicz of the Polish Academy of Sciences, senior scientist at Potsdam Institute for Climate Impact Research (PIK), Potsdam, Germany. Professor Kundzewicz, delivered a talk on the subject: Climate Change Impact on Europe, in which he explained the major concerns related to damage caused by human activities, and backed up his arguments with ample scientific evidence. Among mentioned problems, were those related to cultivation of a positive attitude towards fossil fuels excavation, which feels like a throwback to the 19th century mentality of the Industrial Revolution. Regrettably, short-term solutions encouraged by populist still act as an effective bait for gaining supporters. Misinformation and promises of benefits work, because they appear to those who want to preserve the status quo  e.g. mine workers, mine owners or fracking companies. And, even though “the plural of anecdote is not data” - as Nancy Pelosi put it, there are people who for various reasons prefer illusions to facts.

So far, the first half of the 21st century, has not been easy. But on the other hand it is not the only period marked by uncertainty and confusion. Past transformatory events like the 18th century Enlightenment and the 19th century Industrial Revolution triggered processes that continue to challenge today’s societies. In the unfavorable for social progress circumstances August Cieszkowski - a 19th century Polish philosopher, reformer, and an economist undertook actions, which to many seemed unrealistic. But Cieszkowski was a persistent optimist, and thank to a combination of factors not only did he manage to bring his ideas to fruition, but to create a long lasting positive impact on Polish, and, to a degree, the European society. Cieszkowski hoped to find solutions to some social problems by improving farming, rather than e.g. mining. He wanted to optimise food production and advocated scientific approach to management of natural resources. He encouraged studies of weather patterns and of other factors. Eventually, Cieszkowski founded a school that became today’s Poznan University of Life Sciences and co-founded the Poznan Society for the Advancement of Arts and Sciences (PTPN). Like William Shipley and a group of Shipley’s friends in the 18th century England, a relatively small group of the 19th century Polish intellectuals proved that with the right mindset individuals can overcome some difficult circumstances, change reality and positively impact the future. 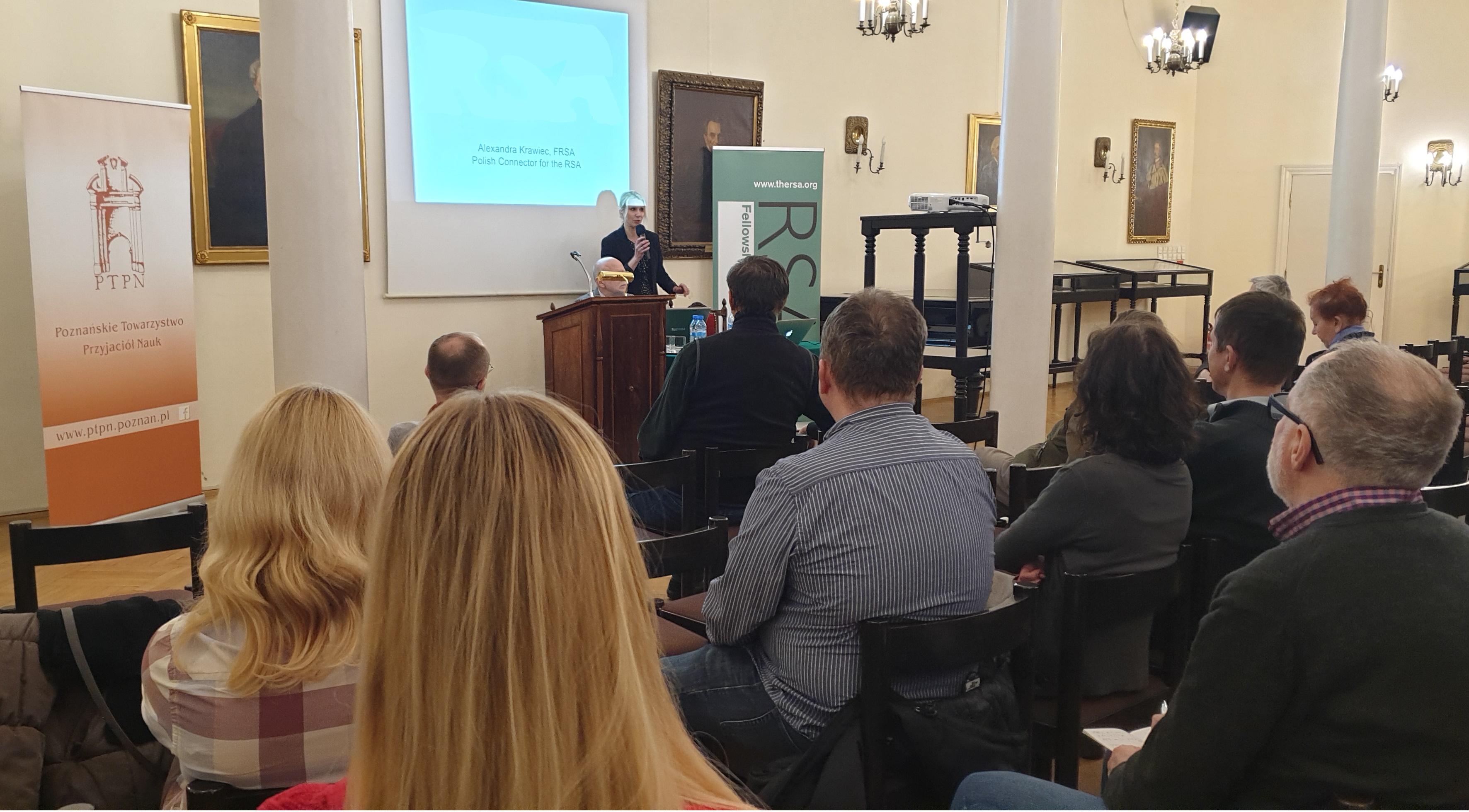 The historical context was touched upon during the RSA-sponsored event, held in the historic building founded by August Cieszkowski. Those who participated in the meeting could learn not only about the implications of climate change but also about the RSA, its mission, objectives and main activities, including some of the RSA’s current and past projects such as "The Seven Dimensions of Climate Change". When reflecting on this first RSA/PTPN event, it becomes apparent that like the past generations, we too must keep pace with progress, which even though builds upon the past is very different from it. We need to be in harmony with our own Zeitgeist, with the progressing environmental and social changes. We not only need to adjust but to find sustainable solutions to our problems. What we should copy from the 19th century is certainly not the fascination with fossil fuels, but perhaps, their fascination with science and technology. Our unprecedented access to education is what past generations could only dream about. It is our greatest asset but also our duty, an imperative to evangelise our own kind, about the perils of false beliefs, and about the importance of science-based truths.

As history shows, a lot of evil happened due to the narrow-mindedness and greed, and a lot of good happened thank to those like Shipley or Cieszkowski. Today, it is our turn to unite beyond borders, each within their own capabilities and to act towards one goal, which is protection of our natural environment, and the protection from ourselves. Last, let me refer to a call posted on social media by Evan Davis, who was asking, though in the context of Brexit, if someone could organise a huge citizen assembly. In response to that, Matthew Taylor wittingly, and wisely, replied: " that someone should be 'you' “. And that is exactly what can, and needs to be done. The Arctic ice won’t wait long, and neither can the coral reefs. They require our help, and they need it now.