The power of local partnerships

I jumped back in the saddle for the Food, Farming & Countryside Commission UK-wide bike tour, this time headed to Cornwall. After a week of speaking to civil servants, farmers, researchers and community groups from Truro to the Tamar Valley, I saw first-hand the effectiveness of joined-up partnerships and projects tailored for the south west, but also the dissonance in governance at landscape level.

The need for local decision making is something we’ve heard time and time again on the bike tour. This land is different to that land. This place is different to that place. How can we have the same rules as them? With its’ unique geography and cultural heritage, unsurprisingly, Cornwall was no different. Staff at Cornwall County Council told me that uplands policy is based on the moors and dales in Yorkshire, and so isn’t suitable for Dartmoor or Exmoor because of the different conditions, which makes effective management more difficult. When discussing a land-use framework for England, a proposal the Commission is currently working on, a potential problem was noted; many people don’t identify as English, but Cornish, which could lead to tensions in implementation. My numerous weeks on the bike, in opposite ends of the UK, revealed that such a framework would need to account for strong regional differences to be effective.

It is clear the countryside is not one homogenous space, that different communities have different needs and so require a system that allows for and accounts for this. But at what scale does decision making currently take place and at what scale should it?

Rachel from Cornwall County Council told me that there is a need to manage whole ecosystems in  farming policy, and that conversations at catchment level can be very useful; something Cornwall CC already employ for flood management on the north coast, for obvious reasons – you’ll remember the Boscastle flood of 2004, caused by a flash rainfall on the nearby Bodmin Moor, which torrented down in the to the village and destroyed homes and businesses. But there are inherent difficulties with decision making at a geographical scale; catchments and ecosystems don’t follow county, district, town, borough or parish council lines. This complexity can lead to a fragmented approach to managing and governing land; a Cornwall Council member told me, “There are too many bodies at work - National Parks, Local Nature Partnerships, catchment-level schemes…Defra has created a fractured, inefficient system.”

It’s easy to see how a fragmented approach to land use and management occurs, it’s something we found evidence of in our policy review; sector-based initiatives often ignore the cross-sector linkages, for example, between farming, forestry, water management, nature conservation, and economic development. There is a lack of governance at landscape scale, and yet the success of these sectors is intrinsically linked to the success of others. The definition of governance I’m using in this context is, ‘the process of interaction and decision making among actors involved in a collective problem that leads to the creation and reinforcement of policies.’

The fractured, inefficient system I was told of is indicative of siloed working and a lack of interaction when decisions are being made about the ‘collective problem,’ in this case, how land is best managed sustainably. Perhaps the reluctance to approach issues at the landscape level emphasises how difficult it is; there are complex systems of human-nature interaction that are both geographically and socio-economically defined. To understand the system, an integrated, co-operative, participatory approach is required to work through collective decisions about an area. A start could be simply asking; who is doing what? At what level? How does this affect other sectors? Who needs to work together?

The infographic below from the FFCC progress report has attempted to ask these questions by understanding the value of resources that flow through the rural economy. There are huge efficiency savings to be had if different sectors worked together; farming and land management are deeply connected with water treatment, food waste and food related health costs. The tricky bit is creating the governance structures that require all sectors to work together. 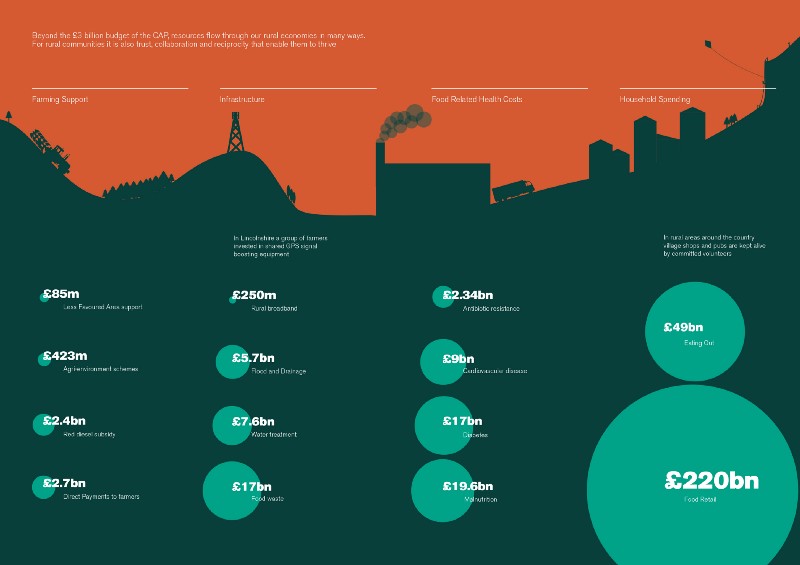 To build in cross-sector participation in to future approaches, Cornwall Council have tried to reconcile multiple aspects of sustainability – economic, social and environmental. Three strategies extending to 2065 have been created for the county in conjunction with the Local Enterprise Partnership (LEP), Local Nature Partnership (LNP) and the Health & Wellbeing Board. The Environmental Growth Strategy works alongside the Strategic Economic Plan as well as the Health and Wellbeing Strategy, and vice versa. It is this kind of thinking across sectors and silos that is most effective at creating change that doesn’t exceed planetary boundaries and has a strong social foundation. There are of course still difficulties – I was told that although the environment and economic strategy are working well together, it has been hard to integrate some of the preventative green care measures in with the health strategy, due to crippling NHS budget cuts.

Over breakfast at the Great Cornish Food Store in Truro, I heard of another effective partnership; the close connection between the Cornwall and Isles of Scilly LEP and LNP. The governance of LEPs is often cited as one of their main problems; they’re an unelected group who have power and budget to drive economic growth, often focussing in urban areas and without a rural remit. But the close work between the LEP and LNP in Cornwall ensures decisions don’t just focus on economic growth but have a strong rural and environmental remit too. Some suggested the planning system should take note of the participatory thinking; “Planning authorities don’t see managing whole ecosystems as their remit – just development – and yet the planning system has a big role to play in more multi-use rural space. It’s a UK-wide problem.”

I travelled from Truro to the Tamar Valley to meet staff from the Stoke Climsland Duchy College and researchers at the Agritech Cornwall centre. One of the college’s most successful recent projects was underpinned by strong links across sectors and networks; The South West Healthy Livestock Initiative aimed to boost farm productivity through better animal health using preventative rather than reactionary measures. It brought together vets, farmers and livestock specialists to introduce proactive farm health planning for producers across the region. In some cases, it cut calf mortality rates by 10% and boosted calf growth rates, in turn boosting profits. The project manager said, “The reason it worked so well was because of the local level it was run at. The national schemes tend to be put together at Defra for bidding.”

Despite projects like the Healthy Livestock Initiative, the lack of farmer to farmer networks was an issue that came up several times whilst in Cornwall. Chris, a Cornwall county farm tenant, said, “Most information available to farmers is funded by companies that are trying to sell something. We need independent research farms run by companies like ADAS.” I was told by another farmer that the younger generations are more inclined to collaborate, but that farm groups are very reliant on an active individual or external facilitator for productive knowledge sharing and co-operation.

My time in Cornwall was insightful, beautiful and…hilly! It’s a county that’s been shaped by natural processes; the marine influence from its peninsula position, unique geology and varied topography. Unlike many other places in the UK, Cornwall is still very reliant on its natural resources for economic prosperity; historically this was mining, but now tourism, fishing, farming, and leisure have become more significant. It is perhaps no surprise that I saw first-hand the concerted effort to manage land and resources sustainably through cross-sectoral partnerships, tailored for the south west, to preserve the unique natural resource for future generations.

Elliot is a Coordinator at the Food, Farming & Countryside Commission

This blog is part of a series for the RSA Food, Farming and Countryside Commission UK Tour. See all the places we went to on our interactive map.