What can we learn from Fellows in Southeast Asia

In March and April 2019, the RSA's global team will be visiting Singapore, Bangkok and Kuala Lumpur on the hunt for social innovations and exploring potential for an action-oriented Fellows network.

Rising inequality, demographic changes, rapid technological development, climate change and declining trust in the institutions and processes of government. These are the problems that plague us now in the early decades of the 21st century.

The dynamics, complexity and speed of these challenges are fundamentally different from previous eras in history and they are made more complicated by how differently they are experienced in diverse locations and contexts. What is common is that current approaches are not making enough progress. So where might we find solutions to these seemingly intractable problems?

One way is to seek out places at the hard edge with more to gain and who, by necessity, are inherently more risk taking when it comes to social innovation. One region that stands out as embracing innovation, human centred design-thinking and lab modes of working to drive towards sustainable development is Southeast Asia. Countries in this region are embracing development approaches that move away from the previously traditional approach of research and development based on upgrading technology and knowledge capacity to one that harnesses the social sciences to unlock transformation.

Social innovation and the SDGs 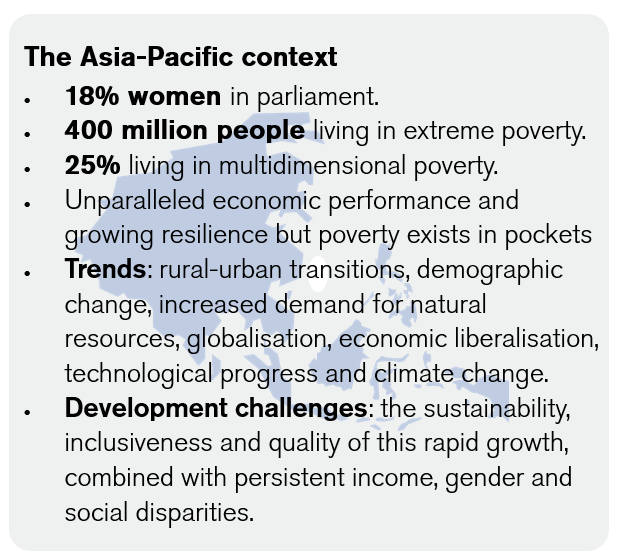 In January of this year, the UNDP launched its Accelerator Labs in 60 developing countries. These labs have been created to think anew ways of making 21st century development happen as the agency recognised that continuing on its previous trajectory would risk not meeting the Sustainable Development Goals by 2030. The Global Goals are an urgent call for action by developing and developed countries in global partnership to end poverty, reduce inequality, improve health and education, and spur economic growth - while tackling climate change. In the Asia-Pacific region specifically, a bold new plan for the SDGs is being rolled out. It is one that harnesses design-thinking and embraces foresight and innovation. Here, social innovation centres around creative responses and platform creation that explicitly tie development to the SDGs in response to a rapidly changing context.

It is in this context that I, along with my colleague Adanna Shallowe, will be visiting the region in March and April of this year. It is where the third largest concentration of Fellows of the RSA live outside of the UK after the United States and Australia & New Zealand. We will be visiting Fellows who lead networks and who are responding to and acting on the issues critical in their local and regional context while contributing to multiple linked SDGs. First, we’ll visit Singapore: one of the four Asian Tigers whose development was fuelled by exports and rapid industrialisation and so for whom automation and the future of work are critical issues. Then to Bangkok: the hub for development agencies in the region. Thailand reached new economic heights quickly, but middle-income challenges persist: just 16% of Thai Parliament is represented by women and economic and social inequalities are stark.

I am hoping to explore with Fellows and others what an action-oriented network might look like in a Southeast Asian context and identify how the RSA can best support this. We’ll also be meeting with key stakeholders related to major RSA research content such as global skills innovation, the future of work, lifelong learning, and economic security.

The RSA and its global network of Fellows have a lot to learn from a region at the cutting edge of social innovation - which is why I’ll be based in Singapore and Kuala Lumpur throughout April and hope to meet with many there.

Between 1st – 12th April I will be based in Singapore – please get in touch.

Between 15th - 18th April I will be based in Kuala Lumpur – please get in touch.

Lauren Orso is the RSA's global manager. She delivers and supports globally-based activity for Fellows including online events and development of Fellow-led networks. She is passionate about impact evaluation to measure the change the RSA seeks to make in the world.