What will be the impact of the Stronger Towns Fund?

The government’s announcement of a £1.6bn Stronger Towns Fund will inject much needed cash into some of England’s most neglected places. But it is unlikely to achieve the “transformational” effect that communities secretary James Brokenshire expects, unless it is part of a much more systemic approach to regional economic development.

The timing of the government’s decision to pump £1.6bn into towns in the North and the Midlands has prompted critics to call it a ‘Brexit bribe’ to the Labour and Conservative MPs who represent such places in order that they back Theresa May’s withdrawal deal.

In the absence of any coherent, long-term economic planning, the best use of the new money will be to fund experimental interventions that address the economic insecurities that fuel perceptions of people and places being ‘left behind’.

Government has made it clear though that the funding is guaranteed, irrespective of the outcome of the forthcoming meaningful vote, and so when the political dust settles it is right to ask whether this investment is likely to have any impact.

Concerns about the Stronger Towns Fund

The most obvious challenge comes from those who rightly argue that the amounts of money involved are tiny in comparison with the sums that have been cut from local councils and other public services budgets since 2010.

The IFS calculate that local government spending was cut by around £15bn from 2010-2017 and at the last budget there was a further cut of £1.3bn.

However, the Stronger Towns Fund will be given to Local Enterprise Partnerships (LEPs), not local government. Given current funding for LEPs has been so paltry this will give some of them a significant boost. But even comparing like with like, it is worth remembering that England’s Regional Development Agencies (the predecessors of LEPs) spent on average £1.9bn a year between 1999 and 2007.

A further challenge will come from those who will consider such investment to have little chance of increasing local productivity.

There is a running joke that the What Works Centre for Local Economic Growth should be renamed the What Doesn’t Work Centre, given its habit of casting doubt on almost any form of public investment outside Britain’s big cities having even the slightest positive economic benefit.

Ideas of ‘agglomeration’ (bigger cities are better) and city-driven productivity (richer cities will help the whole region) still dominate orthodox thinking in the Treasury. There will be considerable scepticism in the civil service that spending through this fund will have anything other than a palliative or political effect.

Not a systematic approach

But the most fundamental challenge to this type of public expenditure is that it fails to adopt a systemic understanding of the problem it is trying to address.

It is right to worry that places have not “shared in the proceeds of growth in the same way as more prosperous parts of the country”, but neither pumping money into our big cities through 'City Deals' or changing the political rhetoric through a 'Stronger Towns Fund' has any chance of genuine local or regional rebalancing on a long-term basis without more joined-up policymaking.

1. Understand the relationship between cities and towns better

First, we need to understand the nature and function of city-regional economic systems.

Between 2010 and 2016 policy-makers in the UK obsessed about cities. With projections suggesting that the large majority of humankind would be living in cities by the middle of the century, in policy terms many smaller places were very much ‘left behind’ in favour of a preoccupation with city growth.

Much of the evidence for the focus on big cities was drawn from a partial reading of the literature from the US context and from global mega-cities like London, Tokyo and Singapore. But in fact, monocentric cities with highly concentrated urban financial centres bear little resemblance to the kinds of urban system that characterise the majority of the UK and most of continental Europe: not one centre driving all growth, but multiple centres of smaller towns and mid-sized cities supporting different kinds of economic activity. 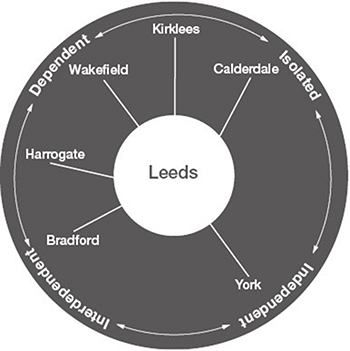 As Sarah Longlands and I showed in our 2016 City Systems report, published shortly before the EU referendum, most English cities outside London have complex and complementary relationships with the smaller towns and cities that surround them.

In the case of the North of England, small and medium-sized cities account for almost a third of the northern economy and since 2010 grew just as fast as the core cities nearby.

Furthermore, far from being ‘left behind’, smaller towns and cities in the north are home to some of the region’s most important economic assets such as advanced manufacturing sites in places such as Rotherham, renewable energy assets as in Hull, and high-level research facilities such as Daresbury.

The silly contest between big cities and smaller towns that seems to have ensued since the EU referendum denies the reality of complex city systems.

What is more important than who deserves the next slug of government cash is the economic and social relationships between different types of place.

Where transport connectivity is so poor in so many areas outside the South East, it is little wonder that many places perceive themselves to be ‘left behind’, but in truth there are numerous types of relationship between places within wider city-regions with very few places being completely isolated from any urban core.

The sooner we understand the nature of these relationships, the more likely that public and private investment will have a more transformational impact.

The second dimension of a more systemic approach to local and regional rebalancing concerns governance.

The administration of the Stronger Towns Fund is apparently to be entrusted to England’s 39 Local Enterprise Partnerships (LEPs). There is some logic in giving an economic development fund to the bodies charged with improving local economies, but their patchy performance to date and their lack of any democratic accountability for significant public funds will give citizens and businesses a legitimate cause for concern.

The UK is unique in its absence of any regional economic development infrastructure or governance. Aside from London and the devolved nations, England is governed as a single unit of 55 million people or in tiny units of 0.5 - 1.5 million. The absence of any regional tier of governance is perhaps the single greatest systemic cause of the nation’s productivity problems.

Academics such as Phil McCann have shown that the fundamental problem facing the UK economy is the mismatch between the high levels of regional differences caused by global shocks and the ability of those regions to respond without the authority necessary to mobile the appropiate local players.

Of course, simply creating a new tier of regional governance for economic development would be unlikely to make significant difference in and of itself. The third systemic change necessary to unlock the nation’s economic competitiveness is a change to how public finances are administered.

The Stronger Towns Fund represents the worst kind of public funding as it reeks of being little more than a political bung.

In a nation so centralised as England, the government has little choice but to deliver its programmes in this way and local players will lap it up willingly. Again though, it really needn’t be this way.

While central government enjoys the control it may have on the purse strings this does very little to incentivise the behaviours of local government and its partners. If treated like children, they are of course much more likely to behave like them.

Rather than announcing the occasional dollop of cash for a minister’s latest pet project, a far more mature way to treat the public finances is to develop longer-term funding settlements with high levels of fiscal decentralisation.

In the UK, local taxes account for just 1.7% of GDP and in England, local authorities raise and spend barely 5% of their own revenues.

Plans to ‘allow’ local authorities to raise more council tax and to ‘devolve’ business rates will make a marginal improvement, but nothing like the change necessary to bring England into line with most European neighbours where regional and local governments are responsible for as much as 50-60 per cent of tax revenues.

The very idea that a central government might bestow £1.6bn on its regions in a country like Germany, Italy or France would be roundly derided and perhaps even seen as an affront on the autonomy of democratically elected local and regional governments. 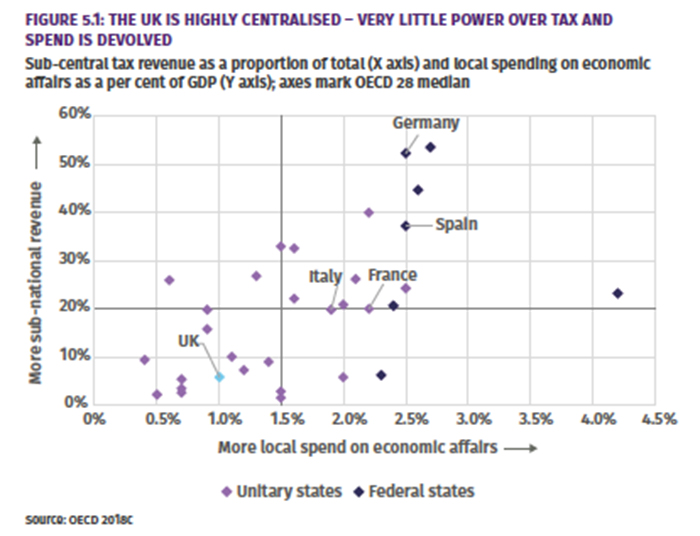 From IPPR North,State of the North 2018

The best use of the Stronger Towns Fund: experiment

So in the absence of a more systemic approach, how then might the Stronger Towns Fund be best put to use? My suggestion would be to use it for some carefully targeted experimentation.

For all the talk of ‘inclusive growth’ in the months since the EU referendum, there has been decidedly little transformative activity on the ground.

A growing number of local strategies and plans have adopted the inclusive growth branding and yet underneath, economic development programmes have remained largely unchanged - devoted primarily to supporting productivity growth in high value firms.

Coinciding with the announcement of the government’s Stronger Towns Fund, the RSA is this week publishing a new report called Inclusive Growth In Action.

The report presents 8 case studies from around the world where local, regional and national governments have tried genuinely transformational programmes of change. From ‘economic gardening’ in Littleton Colorado to the development of ‘public wealth funds’ in Singapore, the report sets out case studies of places where public and private investment has been used in concert to try out new approaches to tackling local economic challenges and where evaluations have shown their efforts have worked.

The Stronger Towns Fund is more likely to secure the Prime Minister her long-delayed Brexit deal in Parliament than it is to address the economic insecurities that lay at the heart of the Leave vote.

But with a little local imagination and courage, it might still demonstrate that with real systems change, regional businesses and sub-national governments have the potential to unlock Britain’s prosperity puzzle once and for all.

We just need Westminster and Whitehall to stop playing politics and give them the real powers they need to get on with it.