Vishal Wilde FRSA is a Civil Servant on the Generalist Fast Stream. He serves on the Executive Committee (EC) of the FDA (a Civil Service and Public Sector Union) as the EC member for the Fast Stream constituency.

The ‘Productivity Puzzle’ is one of the greatest socioeconomic spectres that haunts the ‘developed’ world; the UK’s ‘Productivity Puzzle’ is especially severe. A (social) scientific hypothesis that is usually not (adequately) considered is the potential for public sector working conditions (pay, hours worked, workers’ health and wellbeing etc.) to further hamstring productivity.

Whilst the Productivity Puzzle afflicts OECD countries, the UK’s public sector has, notably, faced an especially blunt programme (through, for example, reducing headcount or pay restraint, which translates to pay cuts in real terms).

What is the Productivity Puzzle?

In a nutshell, the UK has not returned to pre-crisis trends in productivity growth (i.e. from before the 2007/8 financial crisis which is unusual when compared with previous recessions/crises): 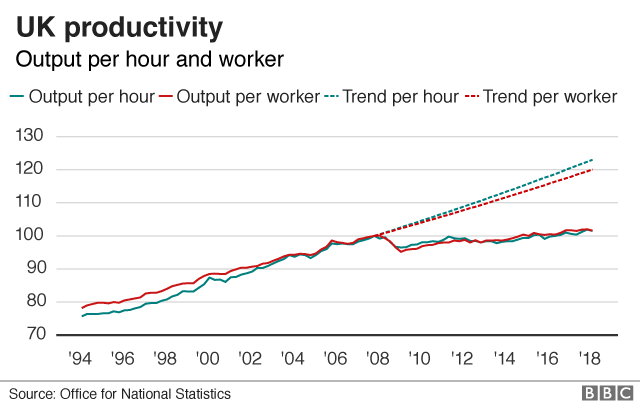 Productivity growth determines real wage growth, with the contemporary productivity puzzle on track to cause Britain’s worst real-wage squeeze in modern history. The following figure, taken from a 2017 report from the LSE’s Centre for Economic Performance, depicts the UK having faced the second-worst average real wage growth amongst OECD countries (Greece being the worst) between 2007 and 2015. 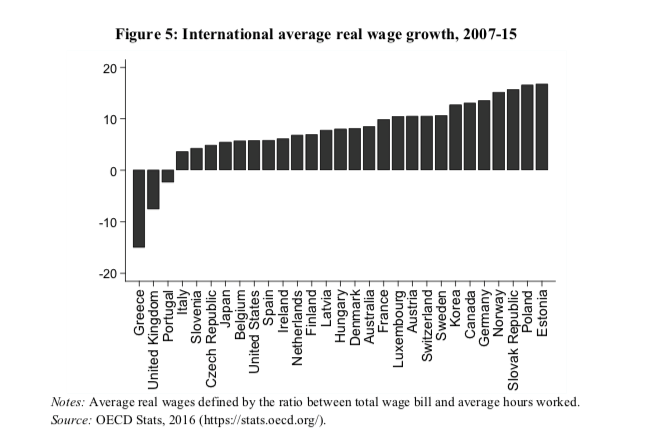 How could the UK’s Productivity Puzzle be affected by Public Sector Working Conditions?

Turning briefly to Greece and the UK – what do they have in common? Both have seen public sector working conditions hamstrung through harmful policies and practices (e.g. the number of public servants in Greece fell by 18% between 2009 and 2015); this detrimentally impacts wider, national socioeconomic malaise and further restrains real wage growth when taking the productivity, morale and well-being implications into account. In the UK, the percentage of people in paid work in the public sector in March 2018 was the lowest proportion since comparable records began in 1999.

A basic understanding of efficiency wage theory (a topic on which I have also previously published a working paper) reveals that workers’ wages are positively correlated to productivity (due to reasons such as morale, health, loyalty, higher quality workforce, lower turnover, increased effort etc.) and that the ubiquitous phenomenon of unpaid hours across workplaces will restrain productivity. Workers have a ‘reservation wage’ (i.e. a wage they need to match or exceed to make it worthwhile working there). Indeed, (prospective) private sector workers and employers will compare salaries, wages, pensions and working conditions to those in the public sector. Congruently, Professor Alison Wolf’s analysis in a thought-provoking 2009/10 report noted that, in order to remain competitive, private sector employers had to match or exceed what was available in the public sector; for example, in regions where public sector pay rates compare unfavourably, the public sector will struggle to recruit and retain a high-quality workforce and, conversely, where they compare favourably, it will be more challenging for the private sector. Essentially, I argue that inflation-linked pay increases and increased headcount in the public sector would help ‘kick-start’ productivity and real wage growth across the UK since pay restraint and anaemic headcount in the public sector weakens private sector workers’ bargaining capabilities.

From a sociocultural perspective, changing (public sector) working norms influence working cultures across employers more broadly. The public sector was once held as an example of ‘work-life balance’ but this is simply no longer the case. Furthermore, ‘network effects’ reinforce this problem; that is, reduced happiness can proliferate throughout society and restrain productivity more broadly. Related to this is the impact of (mental) health and wellbeing upon employees’ productivity (mental health being an increasing concern from early ages which translates to modern workforces) and the biopsychosocial model of health psychology is a lens for understanding this.

Simply examining the deeply disturbing results of the FDA’s (my Union) 2018 Working Hours Survey shows that being under-resourced not only leads to the swelling of unpaid working hours but increased stress and anxiety, unhealthy expectations, resentment, harm to professional and personal relationships, deprivation of family life, depleted morale, substantial decreases in output quality, a toxic environment and much more. Promoting and providing working cultures and institutions that are conducive to equality, diversity and inclusion (e.g. in terms of gender, ethnicity, disability, LGBT+, socioeconomic background, caring responsibilities and much more) do improve productivity and growth in various contexts; however, against a backdrop of fundamental, institutional problems with working conditions, diversity can even lead to unintentionally negative impacts.

Finally, forecasted decreases in productivity growth can, on some views, negatively impact the pound which, in turn, further weakens peoples’ purchasing power because the UK is a net importer; nevertheless, some would argue that a weaker pound can actually improve growth and productivity (although, on my account, the aforementioned, wider socioeconomic malaises probably offset that).

From a social scientific perspective, public sector employment, pay and working conditions more broadly are contributing to and exasperating some of the greatest socioeconomic and international macroeconomic crises through the effect upon firms’ and workers’ productivity, morale, well-being, and wider sociocultural norms; most do not make or have not seen the arguments that policies towards public sector workforces can have (unintended) consequences for national (and international) productivity and real wage growth.

There is insufficient headcount for the jobs and tasks at hand; amongst those who are employed, they are often unsatisfactorily compensated for their time in workforces that are inadequately resourced to foster and bolster equality, diversity and inclusion. These dimensions of the Productivity Puzzle are not usually considered and should be incorporated into subsequent analyses, research and discourse on the topic.

These social scientific observations were researched and written by Vishal in a personal capacity during his own time as an independent researcher. Vishal is happy to provide detailed references for his research upon request.