The Democratisation of Capital and opportunities for Equality, Diversity and Inclusion

Vishal Wilde FRSA has made numerous investments in start-ups and growth-stage firms via ‘crowdfunding’ equity platforms.

The increasing usage of crowdfunding equity platforms exemplifies the ongoing ‘democratisation of capital’ where wealth-generating investment opportunities that have historically been restricted to high-net-worth and/or high-income individuals are now accessible to most (if not all) people in Europe and the USA alongside sophisticated investors. In addition to increased accessibility to this vital, wealth-generating engine, the democratisation of capital heralds significant opportunities for equality, diversity and inclusion.

The FT reported earlier this year that:

“Less than one per cent of Venture Capital funds in the UK go to start-ups run entirely by women, government-commissioned research has found, revealing another yawning gender gap in the business world. The UK VC & Female Founders report for the Treasury discovered that for every £1 of VC investment, all-female founder teams get less than 1p. All-male founder teams get 89p and mixed-gender teams get 10p.”

Analogously, over in the USA, TechCrunch reported that

“Despite efforts to level the playing field for female entrepreneurs, U.S. female-founded startups have raised just 2.2 percent of venture capital investment in 2018.”

This is despite findings that women founders and co-founders actually generate more revenue despite getting less investment (something I’ve also spotted in my own portfolio):

Without going into specific details of my portfolio’s performance, I started investing in October 2017, gradually built up my positions and substantially outperformed the FTSE 100 and S&P 500 indices over that time period. 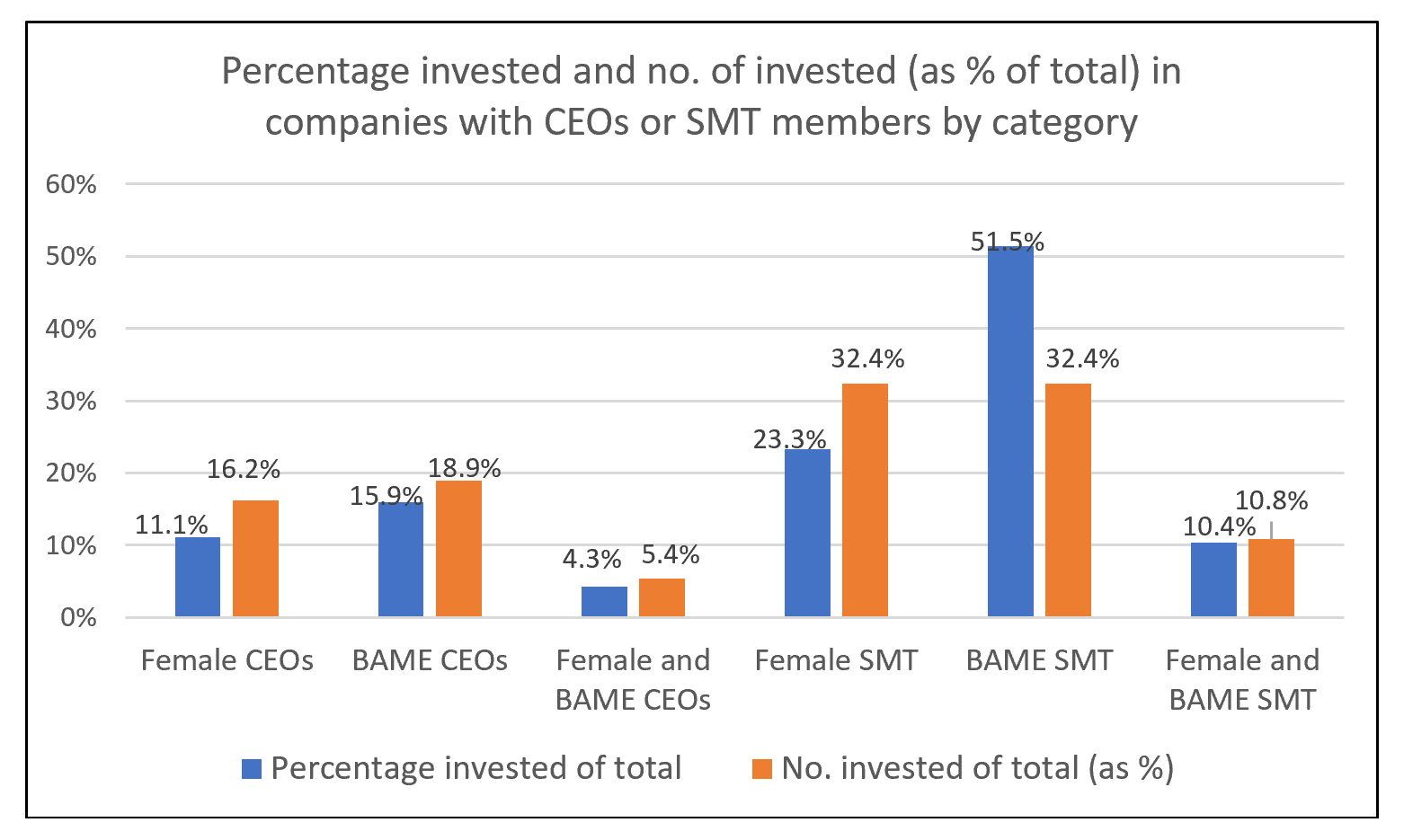 Thus far, my investments into private companies have been made through Crowdcube (although some of these firms have also had funding rounds on other crowdfunding equity platforms) and although I have not identified the percentage of all investment opportunities on the platform with female and / or BAME CEOs and SMTs, I do sense that there is a higher ratio of male and non-BAME entrepreneurs that seek funding so perhaps I need not flog myself too heavily! Another limitation is that I’m unable to capture entrepreneurs’ / founders’ socioeconomic backgrounds, whether they have disabilities, their religious belief or faith, sexual orientation, and whether they have a BAME background but ‘look white’, as well as many other diversity characteristics.

My relatively basic analysis shows the percentage of investments into female CEOs and mixed-gender teams seems to outperform Venture Capital funds in the UK and my investment into BAME CEOs and SMTs with BAME representation seems to be roughly in line with or even higher than the 13% of the UK population from a BAME background.

Nevertheless, the above chart also highlights potential problems with the way I invest. Even when I invest in companies with female CEOs (16.2% of the time), I invest proportionately less capital (11.1%); this means that even when I choose to invest in a company led by a female CEO, it tends to be relatively less than when I invest in a company led by a male CEO – this may serve to help quantify and highlight my own unconscious biases as a male investor. Indeed, the discrepancy is less pronounced for my investments into companies with BAME CEOs (with 18.9% being led by one and 15.9% of funds invested there) and may, in part, reflect my own BAME (South Asian) background; indeed, although 32.4% of my investments were into companies with SMTs with BAME representation, 51.5% of my funds went to those companies. There is less discrepancy when we have a CEO who is both female and BAME as well as an SMT with both female and BAME representation. The discrepancy persists for SMTs with female representation since 32.4% of investments are made here but only 23.3% of the capital is invested. This is a relatively basic analysis but it shows how investors are fully capable of monitoring their own investments from an equality, diversity and inclusion perspective and ensuring we ‘vote with our wallets’.

Of course, it isn’t just through crowdfunding equity platforms where investors can monitor their own performance against the principles and suitable metrics of equality, diversity and inclusion. Investors could do the same when investing in large, established and publicly listed firms and, conversely, investment platforms, managers and advisers could succinctly offer this data to investors / individuals and thereby help facilitate and promote equality, diversity and inclusion.