After a very successful RSA (Cymru) event in Raglan, here are my further thoughts on the impact of the project in cohesive communities in Wales.

The Wales Co-operative Centre has delivered the Co-operative Housing Project in Wales, funded by the Welsh Government since 2012, and the Nationwide Foundation since 2014.

The Co-operative Housing Project in Wales provides support and advice to groups and organisations across Wales to stimulate the co-operative and community-led housing sector, in turn creating more affordable homes, for people in need.

The Co-operative Housing Project in Wales has helped to develop and renovate 137 new affordable homes, upskill over 250 people in co-operative principles and has worked with partners across Wales to raise awareness of co-operative housing. Although the current project works with all models of CCLH, our three ‘pioneer schemes’ all developed in a similar way (i.e. they were all hosted by a housing association). These schemes accessed social housing grant via the Welsh Government. These pioneer projects include Home Farm Village Housing Co-operative, Old Oak Housing Co-operative and Loftus Village Association Housing Co-operative.

Whilst the current project has supported schemes that have developed in a range of ways and that have adopted different model rules, the majority have been ‘hosted’ by a housing association. Unlike more traditional co-operative and community-led schemes, they have not formed around a common interest or intention to live a co-operative life, which we have discovered, can lead to issues later on. While there still remains value in this ‘top-down’ approach, we feel that there needs to be a stronger bottom-up drive to enable a CCLH movement in Wales to thrive, creating more affordable housing for people in need.

Now we build social capacity, scale through cohesive networks, and sustainability within the Co-operative and Community Led Housing (CCLH) Sector across Wales, to grow the supply of good quality, affordable housing for the people who most need it.

Our programme is made up of the following 5 key stages: Engage, Explore, Enable, Expand and Educate & Influence. 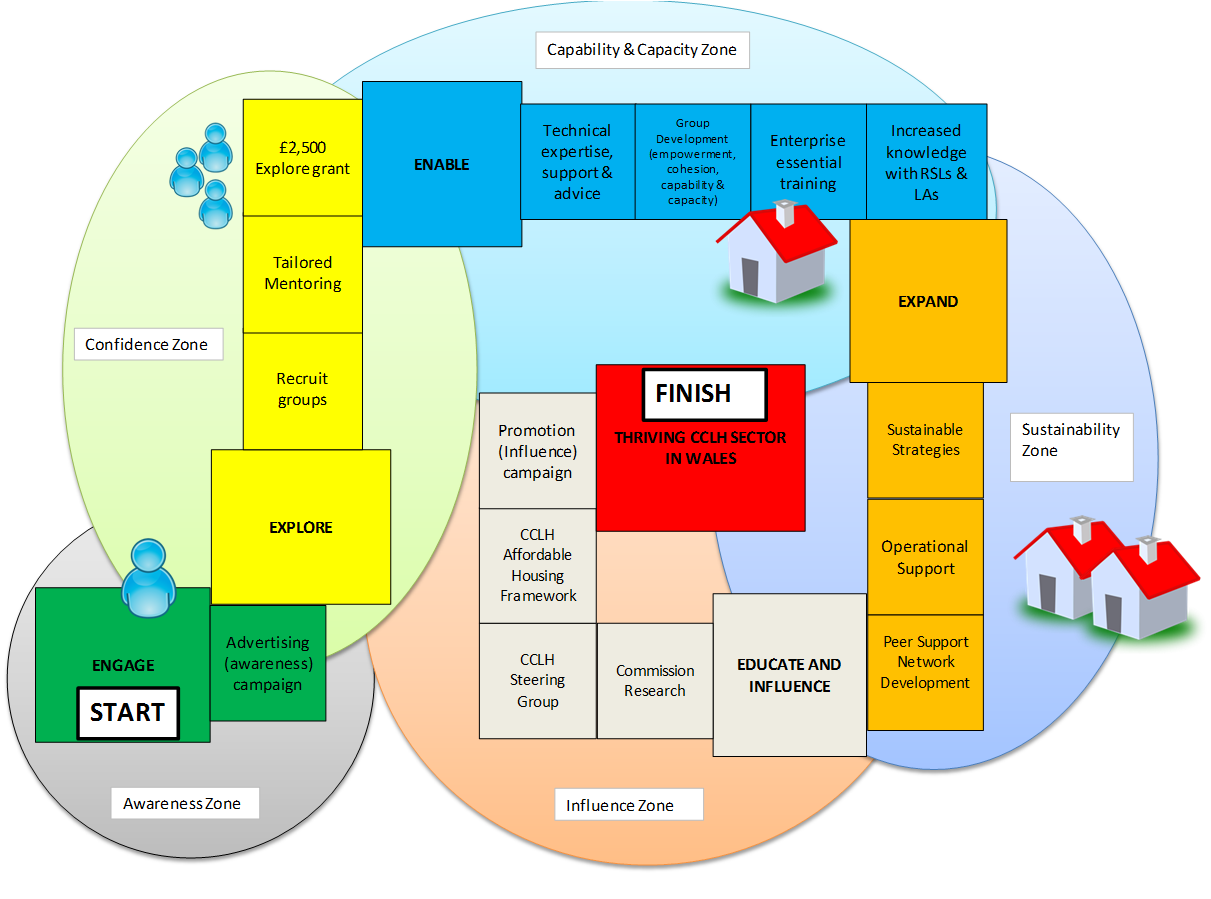 Our Engage and Educate & Influence stages of the programme aim to create demand for small and large scale CCLH developments at both a public and strategic level while removing some of the known barriers that have held back the sector’s development; in addition to better informing the general public about CCLH, we want to work collaboratively to upskill housing partners and local authorities, enabling them to establish their own CCLH schemes beyond the life of the project.

The programme will therefore comprise three core support stages (Explore, Enable and Expand), all underpinned by ongoing Engagement (marketing) and Education and Influencing (sharing of data/findings). Each core stage is designed to nurture the CCLH life cycle and will be underpinned by peer to peer networks. The networks will allow groups to share their learning and provide support, underpinning the sustainability of the CCLH sector by increasing skills, knowledge and capacity.

I look forward to the next RSA (Cymru) event in the summer, with continuation funding from the Nationwide Foundation, Welsh Government and working with DTA Wales providing early stage support, in cohesive communities in Wales.