For the past month I’ve been in Southeast Asia on the hunt for social innovations, supporting Fellows’ activities, and gauging appetite for an established Fellow-led network. Alongside Adanna Shallowe, I’ve been meeting partners interested in exploring key RSA research themes such as the future of work, inclusive growth, life-long learning and skills, as well as design.

A sincere thanks must go to Sriven Naidu FRSA, So Jung Rim and Chor Pharn Lee, who were generous with their time, connections and insights and without whom this trip would not have been possible. I’ve learned a lot, and so now, at the close of my 6-week visit, I hope to share four tentative reflections. Over the coming weeks, Fellows who hosted events on topics ranging from mindfulness to circular design will share their insights, and together, we will be setting out a schedule of activities and opportunities for Fellows and others to become involved in establishing a network based in the region.

1 – Immersing in the country or region context: looking at the obvious for the unobvious to appear

I’ve been lucky to visit Singapore, Thailand and Malaysia; all countries in the ASEAN regional intergovernmental organisation, but all experiencing shifts in development, politics and global trends such as inequality and technological development in very different ways. Economically, these three countries deviate in terms of their placing on the World Economic Forum’s Global Competitive Index: a tool used to assess ‘national competitiveness’, which WEF define as the set of institutions, policies, and factors that determine the level of productivity of a country. Singapore ranks highly at number 2, with Malaysia at 25 and Thailand at 38. On the SDG Index: an unofficial review tracking country performance against the 17 SGDs; Singapore, Malaysia and Thailand are ranked at 43rd , 55th and 59th respectively. Admittedly, these rankings can be reductive, but do begin to illustrate the picture that one policy or initiative won’t easily replicate elsewhere.

Politically, there are upwards of eight major elections in Asia this year alone. Arriving into Bangkok on election day itself brought this to life. Over the course of the six weeks I’ll have been in the region, the Thais and Indonesians will have taken to the polls, and an estimated 900 million Indians were eligible to vote in the Lok Sabha election. With mixed results, and a global trend towards authoritarianism and decline in democracy, much hangs in the balance in this uncertain world. 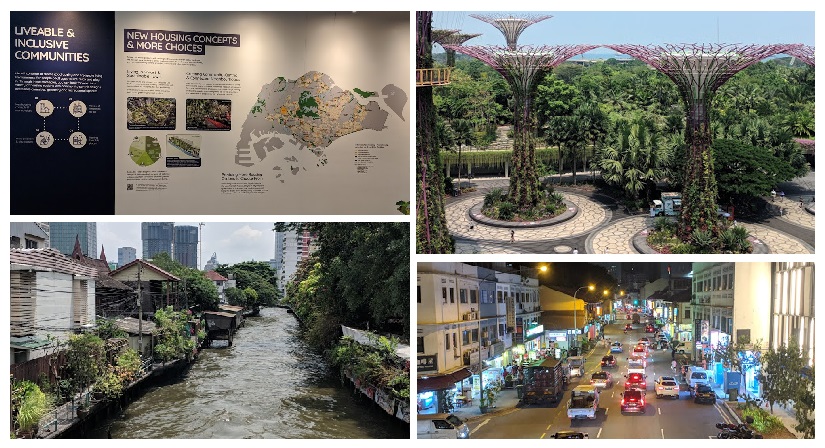 I spent most of my time based in Singapore. In the face of the uncertainty that surrounds it, Singapore’s stable economic and political climate afford the country the ability to plan and predict possible futures to 2050. Although regionally it is often looked at by other governments to replicate its successes, in reality Singapore has more in common with East Asian countries further to the North than its closest neighbours, making following its lead or replicating its policies problematic. With challenges faced regionally appearing in different ways in different countries, actors are eager to make change, but which innovation narratives are taking hold?

A recurring theme, and one we were on the hunt for examples of, has been social innovation for global challenges and sustainable development. Every government is grappling with their account of an innovation narrative. In Singapore, this seemed to trend towards a tech-heavy app-reliant form of innovation from the Silicon Valley playbook; whereas in Bangkok a different flavour persists: social innovation start-ups, incubation networks and accelerator labs form a dynamic and emergent ecosystem. What can be missed in generalising or replicating models is that social innovation, much like democracy, must take form within the habitat it seeks to shift for it to be embraced and become sustainable. Often discussed at the RSA is the 'system immune response': when innovations become bogged down in ‘reasons why not’, and the risk of this is surely higher when adopting solutions off the shelf or retro-fitting programmes. At a Fellows event in Bangkok, we were reminded that changing culture and mindsets to accompany experimentation is important for any chance of success. So how might we attempt to do this?

3 – The value of self-awareness, empathy and deep listening to accompany experimentation and authentic conversations

I was struck by the importance placed on empathy, self-awareness and deep listening from everyone I met. From the first Fellows’ event on mindfulness and self-awareness to the final meeting with the United Nations Development Programme, there was empathy and a concerted effort to speak about the human at the heart of challenges and solutions. The tone that characterised all conversations I had, and which was humbling, was the care and attention given to the human at the heart of the problem. For example, Singapore’s Centre for Strategic Futures focused on the social implications (isolation, loneliness, mental health) of the future of work, rather than simply on quality of employment. Taking extra steps beyond identifying the immune response within people to change, to entering into a player-coach relationship, which is as much about changing mindsets as it is about allowing others in to change ourselves, is when we’ll have our most authentic conversations and identify routes to transformational change. Singapore’s Innovation Lab within the Prime Minister’s Office adopt this player-coach arrangement to embolden the country’s 145,000 public servants to embrace innovation. And indeed, we can call out polarity as an issue and be encouraged to mix with others we disagree with, but we first must practice deep listening and self-awareness in order for these conversations to be authentic and productive before launching into a debate.

4 – The future as neutral ground

The RSA recently employed scenario planning to assess several distinct and divergent visions of what the labour market might look like in 2035 in the latest report from the Future Work Centre: The Four Futures of Work. This was our first foray into the methodology, one that Singapore has harnessed since the 1980s and is well-funded by the Ministry of Defence. Since 1993 the government approved the use of scenario planning as a long-term strategic and policy development tool. Speaking to representatives from a range of government departments in Singapore working on futures, it became clear that solving problems collaboratively becomes easier when tackling problems 20 years away. Dealing in the future can be a neutral language and can overcome the incentives most would-be public entrepreneurs experience that mean they focus on 1-2-year KPIs at the expense of bold innovations and inter-departmental collaborations. It’s also the only way we’re likely to be able to tackle issues such as climate change and its associated physical and transition risks that are set to destabilise us completely. Singapore is stable politically and economically, and therefore is afforded the latitude to do this; the RSA is a 260-year-old organisation and arguably is afforded this same long view. And we must take it. As it’s clear those in power charged with looking after future generations’ best interests are currently solely focused on their own.

Ways to get involved: