MeeTwo - a current RSA Catalyst Award project - is a finalist in this year’s Tech4Good Awards and through it we were given the opportunity to run a crowdfunder campaign.

The theme for our campaign was a no-brainer.

We wanted to conduct research with boys and co-create tools and resources to make it easier for them to access mental help when they need it. The MeeTwo app already supports 4,000 boys, and we know how hard it is for them to open up, particularly around issues such as self-harm and suicidal ideation. Although most people think self-harm primarily affects teenage girls, research now shows that 1 in 4 boys aged 16- 25 self-harm. Boys who self-harm are 17 times more likely to die by suicide. Suicide is the leading cause of death in young people. And boys account for 75% of all youth suicides.

We thought we had it all. An emotive story, an undeniably important mission, and a multi-award winning app to deliver the initiative. And how hard could it be to get people to click on a link and donate a quid? Very bloody hard, as it happens. Everyone was incredibly enthusiastic about what we were doing, but there was a clear disconnect between them understanding the merits of the initiative, and them being willing to take two minutes out of their day to click a few buttons and fill in their credit card details.

We struck lucky in the first week with a large out of the blue donation of £500 from someone who had lost a loved one to suicide. That should have given us a clue about better ways to pitch our project, but we didn’t take the hint and carried on pushing mud up a hill.

Because we are an app, our main strategy for connecting with potential donors was through social media. We tried all sorts of different strategies to attract attention to our mission. Tagging celebrities was a massive fail, presumably because their accounts are run by minions who view social as a way of maximising their exposure, or bagging lucrative sponsorship deals. On Instagram, a ‘like’ from Miley Cyrus got us excited, but it didn’t translate into a donation. On Twitter, David Baddiel retweeted one of our tweets, but only because a previous tweet of his had revealed that he was stuck on a train and bored out of his mind.

Although more people visit non-profit or charity websites through a phone (48%) than a computer (44%) mobile users account for just 30% of donations. (M+R benchmarking, 2019). One of the reasons for this is that the average nonprofit homepage takes 0.31 seconds longer to load on a mobile device than on a desktop. Less than a third of a second may not seem like a long time, but it is long enough to erode the enthusiasm of well intentioned but impatient supporters. Every additional click counts so we tried to streamline our page to make donating as easy as possible, but the absence of PayPal options in Crowdfunder creates a further barrier. It's frustrating to think how many people might have gotten to that point and then given up.

It was beginning to dawn on us that we may have had more luck if we had approached the crowdfunder in a different way. An Adobe review of the number of donations made after 43 million visits to the websites of 24+ charities found that three-quarters of visitors to charity websites arrived there either by doing a web search or by directly typing in the URL. Only 3 percent of referrals actually came from social media. It was time to think again.

In week two, we adopted a different strategy and had some small business cards printed with key statistics about self-harm and the url for the crowdfunder. These were handed out in offices and pubs and they were so popular that we had to order a reprint at the start of week three. However, they are clearly languishing in suit pockets and getting crushed in the bottom of handbags, as so far, they have not translated into a surge in donations. We got five hundred cards printed and by the end of week two we had 58 donations. 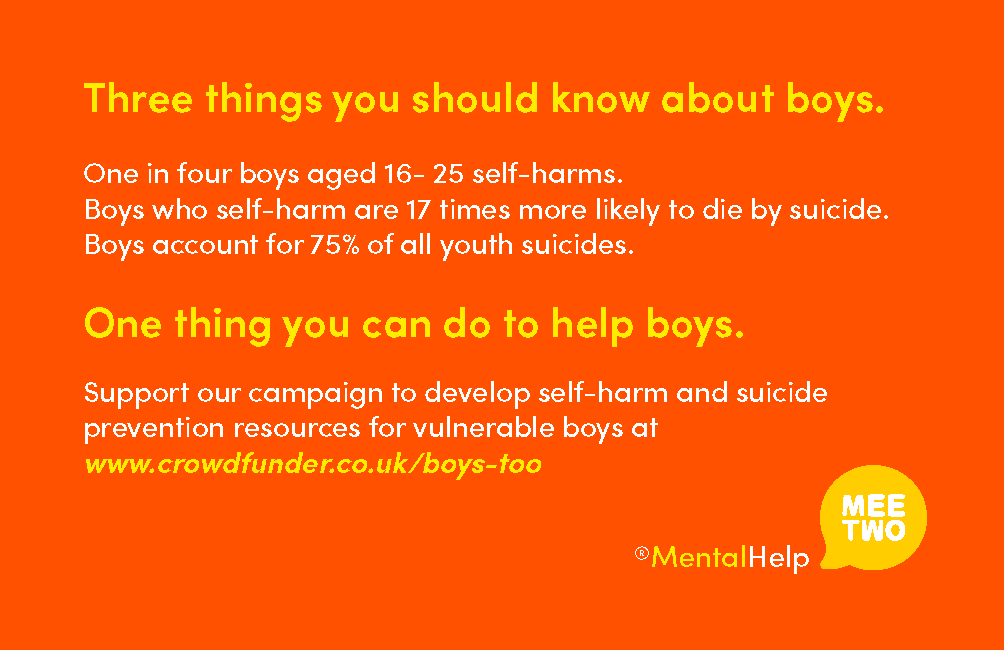 What happened next surprised us. We posted a message in the MeeTwo app about the crowdfunder. Our users are young people aged 11- 23, so we knew they were not going to be able to support the crowdfunder financially but we thought they might tell their parents or their schools.

Instead, they started to share their thoughts and their stories with us. 15 year old Karis wrote:

Being a teenager myself living in South London, I know a lot of males who feel like they have to put up a facade and “be a man”, even in worst case scenarios, such as a loss in their family or a close friend. They then seek to take out their aggression and frustration by punching walls, or even attacking their peers. Nobody talks about male mental health or sees males behaving in such a way as a major issue because “they’re just boys”. To me, it seems like a cry for help. But barely anyone listens

15 year old Jack sent us poems to share his experience of self-harm and offered us his support. He has also persuaded his headteacher to promote MeeTwo. He emailed to say:

Thank you so much for this amazing campaign on such a well overlooked majority. I saw my poem on Facebook and I've been talking to my peers about MeeTwo.

How often have you heard someone saying ‘boys don’t cry’? Many teenage boys do not want to open up and talk about their feelings, because they are afraid of being judged by their friends, or even family members. Any signs of emotions would make them seem as weak, they think. The negative feelings that they are experiencing are bottled up, but eventually the pressure is too much.

Their stories and poems were posted out through Twitter and Facebook and the number and nature of donations we received began to change. The amounts were much smaller, but what was fascinating was that they were clearly from young people and most of them were boys. 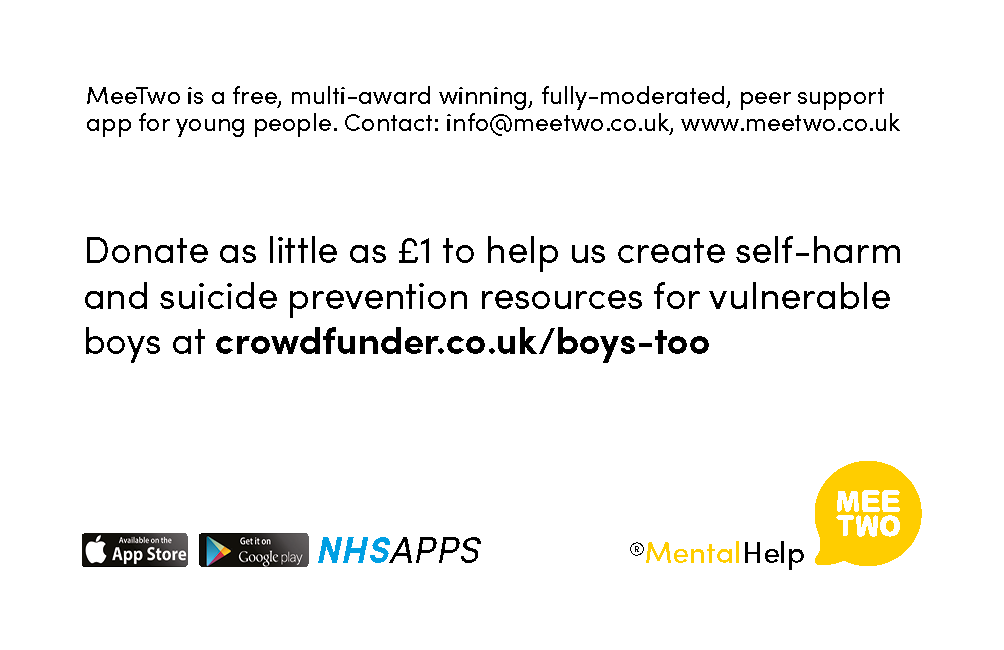 As the final week of the crowdfunder approaches, we know we may not make our financial target, but this campaign has proved to us that young people want, need and are actively willing to participate in a self-harm and suicide prevention project that is specifically geared around helping boys. For us, that is the biggest win of all.

The deadline for our final donation is Monday 15th July at noon so if you want to be a part of a crucually important initiative to break the silence around the self-harm suicide in boys, check out out crowdfunding campaign.