For generations, a ‘job for life’ has been the norm. Today, digital trends have sparked a revolution in how we work and for some this means that work – and life – is more precarious…

Employment in the UK has reached a record high of 32 million. Despite this, economists believe the jobs market has become increasingly precarious for some people. There is growing evidence that British workers are economically insecure. Many jobs are now ‘atypical’ – with self-employment, zero-hours and temporary contract arrangements all growing.

Gig work is also on the rise: recent research from the TUC found that one in ten people use gig economy platforms on a weekly basis. The changing nature of jobs is a key trend to watch as digital innovation continues to impact on every type of business, from restaurants to financial services. 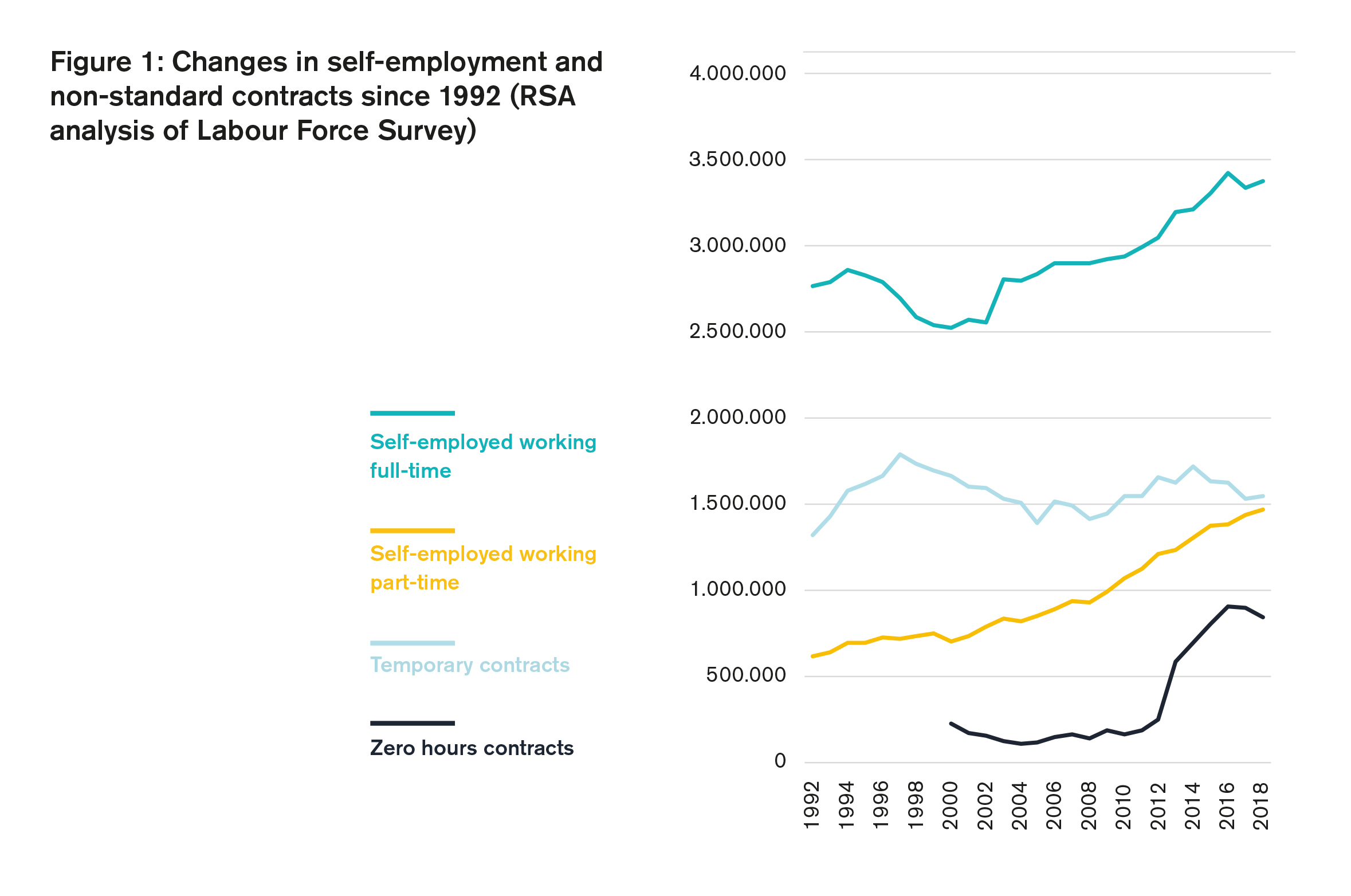 These employment arrangements can offer people the flexibility to fit work around other commitments, but there is a growing concern that such flexibility is ‘one-sided’ with employers seeking “to transfer all risk onto the shoulders of workers in ways which make people more insecure”. The Taylor Review of Modern Working Practices in 2017 put forward a package of measures that start to address this, and in 2018 a spate of court rulings on 'bogus self-employment' followed. The reality for these workers is that they miss out on key protections such as sick pay, parental leave and pension contributions. This leaves one of the fastest growing segments of the workforce most at risk of economic insecurity.

The RSA defines economic security as “the degree of confidence that a person can have in maintaining a decent quality of life, now and in the future.”

What does economic insecurity look like at a population level? National statistics rarely convey the lived experience of people in the midst of change. So, the RSA has produced a report with findings from a new RSA / Populus survey to give a snapshot of the experience of workers in 2019: how they are coping financially and how that has changed since a 2017 RSA report.

Our key insight is that economic insecurity is growing in the UK. The proportion of workers reporting that they experience economic insecurity has edged upwards since 2017 and today almost one in four workers have trouble meeting their basic living costs because of fluctuations in their income (up from one in five in 2017). A significant number lack financial resilience and the majority (59 percent) would struggle to pay an unexpected bill of £500.

Debt and retirement savings are also growing concerns, with 45 percent of workers expecting to have too little in savings and pensions to maintain a decent living of living in retirement. 32 percent are concerned about their current levels of debt.

In addition to financial problems, 21 percent of workers experience problems with job security, reporting that there is a high likelihood they will experience unemployment in the next two years. Meanwhile 29 percent say they feel less secure in their jobs than they did five years ago. Just 35 percent of workers report that they feel they have good scope for progressing within their career (down from 40 percent in 2017). 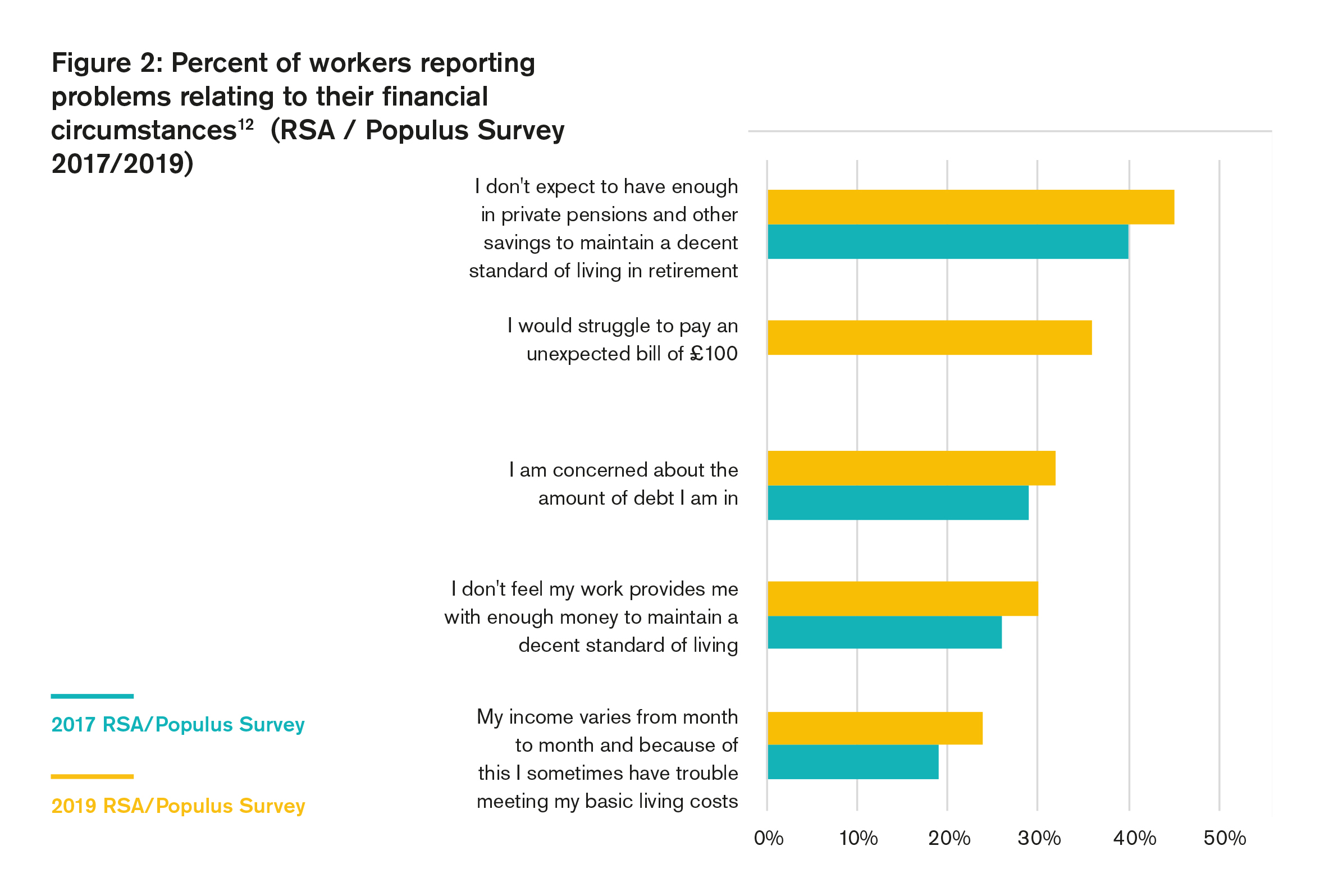 A multitude of drivers are contributing to this rising economic insecurity. 73 percent of our sample reported that they are concerned that the cost of living will continue to outpace wages. Almost half (49 percent) are concerned about the impact that Brexit will have on living standards and more than a third (35 percent) of workers are concerned that the rising cost of housing may force them to relocate. Our findings show that issues such as poor savings and income volatility are not just contained to ‘atypical’ corners of the labour market: they are widespread.

Time to rethink the safety net?

Clearly, these figures merit concern and leave us wondering what we can do about them. How do we intervene when this seems like an unstoppable force of digital disruption? As with all great technological advances, digital platforms have pros and cons. Apps provide us with easy access to work, consumer choice and quick routes to services – but a rise in gig work could also mean that regular hours, mortgage verification, pension contributions, parental leave and paid holidays become obsolete. So, now is the time to rethink the safety net for workers in the 21st century.

So how might we do that? Advances in technology don’t need to result in winners and losers. New technology has provided us with the powerful tools to design systems for workers of the future that could prevent economic insecurity or the feelings of powerless that come with change. We need to harness the power of technology, not passively surrender to it.

To do this, the RSA has been running a pilot programme with the Mastercard Center for Inclusive Growth and Alt/Now to explore the challenges of creating a 21st century safety net for workers, seeking out entrepreneurial creativity and pioneering social businesses and projects. This Economic Security Impact Accelerator is not a traditional tech accelerator or challenge prize: it is an entrepreneurial programme that seeks to build a field of changemakers who can grow their efforts together to address the emergent challenges of modern work.

The Economic Security Impact Accelerator aims to be radically imaginative at a time that desperately needs creativity. The cohort are all working on bold ideas to stem the tide of tech determinism and enable workers to reclaim power over their working lives. As our Alt/Now colleague Charlie Leadbeater has said, real social change requires this kind of a movement — and with this programme we hope to catalyse a “creative community with a cause.”

Watch this space for more updates on how the work of the cohort is coming along.