Resilient Cities across the Globe

On 22nd of July 2019, the workshop Resilient Cities across the Globe, organized by the RSA Japan Fellows’ Network (RSA JFN), took place at the wonderful space of EDGEof in Shibuya, Tokyo. 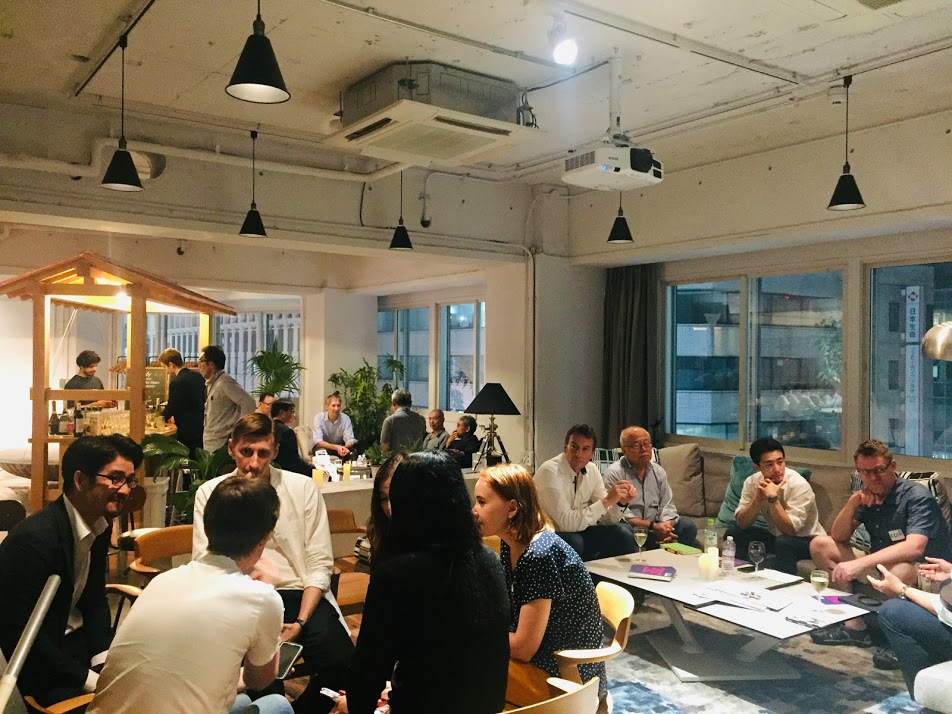 The evening started with some introductions and greeting from the Fellows of the Royal Society for the Encouragement of Arts, Manufactures and Commerce: T. Coke RSA Ambassador in Japan, A. Fulford, K. O’Connor and Y.Kiho, who emphasized to the public how the RSA, as a form of “Enlightenment of the 21st century”, aims to build a new and better society based upon diversity and its richness.

Then the relator of the event, Lolita Jackson FRSA, introduced herself; Lolita is Special Advisor in the New York City Mayor's Office, Climate Policy and Programs. She is also involved in the US-Japan Leadership Program, was the U.S. Board Chairman for the RSA, and is a pro jazz singer –mainly exhibiting in Scotland.

Lolita started pointing out how, while facing huge-scale issues and dealing with climate change effects on the urban fabric, the kind of holistic approach to knowledge and action that is a trademark feature of the RSA shows itself to be suitable for analysis and decision making. Lolita referenced that this was the case since the RSA continuously tends to take into account complexity, nuances and articulation.

She then continued remembering how 2 years ago she had the occasion to speak in Japan for a RSA JFN event, and recalling her very first experience in Japan during 2011, when the Fukushima disaster occurred. She was struck by the willingness of the residents of Tokyo to change their behavior completely for the sake of the city - the thermostats were set quite high in order to save power and no one complained.

Concentrating primarily on her role in the Mayor's Office, she then threw some representative examples of cases in which a certain resiliency was needed in New York. She was working as Director of Special Projects in charge of operational NYC agencies for two large construction projects when Hurricane Sandy hit, and 50 people were pulled together to work on the first resilience plan for NYC. Once she was in that group she stayed in the climate realm, and had several roles in that group. Her current position was created in 2016 and she is actually the first person to hold the job.

Following the catastrophe of Sandy, the city suffered an economic impact of 19 billion USD, with countless people left jobless and even more homeless. The city government in that occasion organized emergency reparations for more than 12.000 houses.

Here, Lolita reflected on how not only resiliency means for a city to be proficiently able to take a blow and remain healthy and wealthy thanks to the adoptable countermeasures, but it also implies an extensive longsighted thought-frame, a mindful and scientifically updated view on reality and urban and social planning.

In this regard, with 8.6 million inhabitants, NYC is an extraordinarily differentiated organism. A representative example is the fact that around 25% of its people are not English native-speakers, with abundant minorities primarily speaking Creole, Korean, Russian, Mandarin and Spanish amongst others. A system with so many and diverse variables necessarily implicates a profound and articulated multiplicity. As Lolita firmly asserted, with a society with a widening social gap, a proper resiliency plan must take into account the condition and necessities of the unfortunate. In this way, on the one hand the city is engaged in the fight to reduce citizens’ carbon footprint and on the other hand action is taken to make the Big Apple a more equitable, sustainable, and resilient place where to live, work and play.

A more psychological aspect of the concept of resiliency is represented by the reflection that cataclysm and crisis have on art. The production and fruition of this kind of art reflects the process of acceptance and metabolizing a common trauma and its effect. In particular in Japan, this phenomenon was explicitely embodied in T.Murakami’s exhibition: In the Land of the Dead, Stepping on the Tail of a Rainbow, for New York’s Gagosian Gallery, in which his trademark “bubbly anime-like characters whose bright eyes and happy smiles dulled with a sense of confusion and piles of skulls occasionally lay at their feet”.

Moreover, through those works, these tragic events may even find a dimension of dignity, and through art a sublimation of the adversity is offered to the public, shedding a beam of light, as a hint to new and better ways about how to tackle life that is ahead.

Continuing her discourse in relation to psychological resiliency, Lolita stressed the accent upon the mental health and stability of cities’ inhabitants. For Japan, with Tokyo as an emblem, the suicide rate and the high number of people that conduct a lonely life and experience undesired solitude, reveal themselves to be factors that undermine the capability of a city to act as a whole during a crisis and the symbol of a partial failure of a government to offer its citizen the perspective of a meaningful:

Lolita than concluded her intervention by presenting the Resilient Cities Network: local governments that all around the world share precious knowledge about avant-garde policy making, innovative infrastructures and all possible cutting-edge measures to ensure that the cities promptly respond and prosper in a world in constant evolution. The seven lynchpin virtues that distinguish these organizations –as described by the official website- are: to be inclusive, integrated, flexible, robust, purposively redundant, reflective and resourceful. She concluded expressing her wish for Tokyo to actively commit to become soon one of them.

“What does resiliency mean to you and what aspect should a city (or Tokyo) have to consider itself resilient?”

A 360 degrees perspective emerged from the public, and the ideas linked themes as the reduction waste to sustainability, the individual dimension of resiliency projected to the collectivity, and of course Lolita’s first point of concern: the conjugation of a just distribution of wealth in relation to the climate-change issue.