Votes at 16? Young people reimagine democracy in the Tees Valley

Stats like these motivated a group of RSA Fellows in the Tees Valley to join forces and organise Democracy Day, the first in a series of activities for sixth formers from across the region to meet, debate and take action about Britain’s democratic crisis.

Eight sixth forms from all corners of Tees Valley took part in a packed day of activity hosted by Barnard Castle School. As well as hearing from experts on topics such as Athenian democracy, the circular economy and school council selection in Bolivia, mixed teams of young people were asked to shoot a 90 second film setting out their own ‘manifesto for democracy’. They had just 90 minutes to put their films together using handheld devices and they were encouraged by Democracy Day leader, David Cresswell, to adopt “fearless thinking” when it came to new ideas.

The power is in your hands

All eight teams produced commendable short films but the winner on the day was a simple montage of talking heads with the powerful message: the power is in your hands.

In many respects this film captured the mood of the day. Despite the deep-seated challenges facing democracy in the UK and beyond, there was a strong sense that young people were determined to do something to change things themselves. From tackling the environmental crisis to addressing mental health issues, the short film talks about young people’s “duty” to get involved.

There was considerable scepticism though about whether such a duty could be best exercised within the current system. As might be expected, there was strong support for the introduction of votes at 16 and much debate about more proportional voting systems to strengthen the role of minority parties. But the greatest energy was for more radical ideas and system change.

Several groups backed the idea of more randomly-selected assemblies or councils in the hope that it might produce decision-making bodies that were more inclusive and diverse than the current political party system. Many also saw citizens assemblies as a more agile way to address their issues and concerns than electing a party on a broad manifesto with a mixture of more and less agreeable policy ideas. 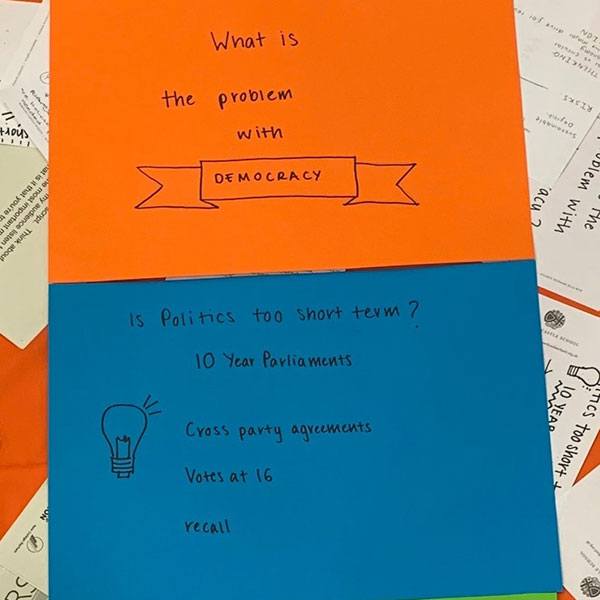 Some questioned why power was held so centrally anyway and made a case for citizens’ assemblies to be held locally or even replace local government. For a group coming together for the first time, there was no shortage of vision or ambition about what needed to change or where that change was going to come from. 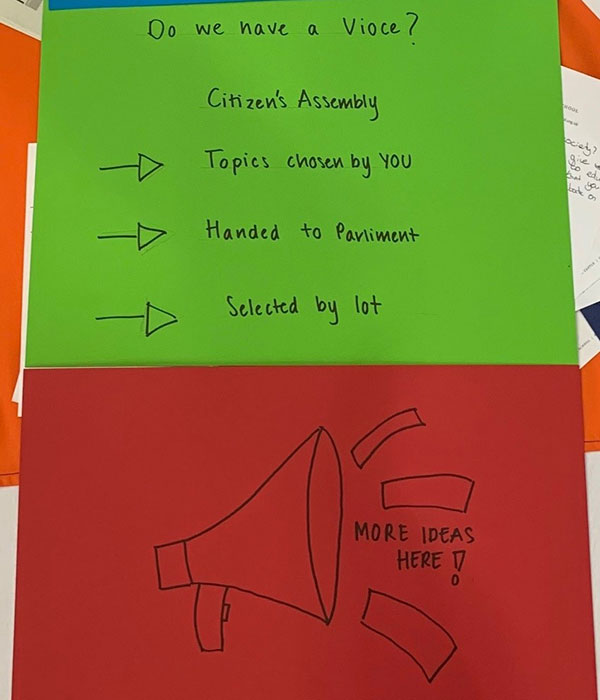 The whole day was captured in these compelling visual minutes which included Matthew Taylor’s fitting metaphor for our democratic struggle: it’s a bit like riding a bicycle, he said, unless you keep moving forward, you’re likely to fall over altogether. 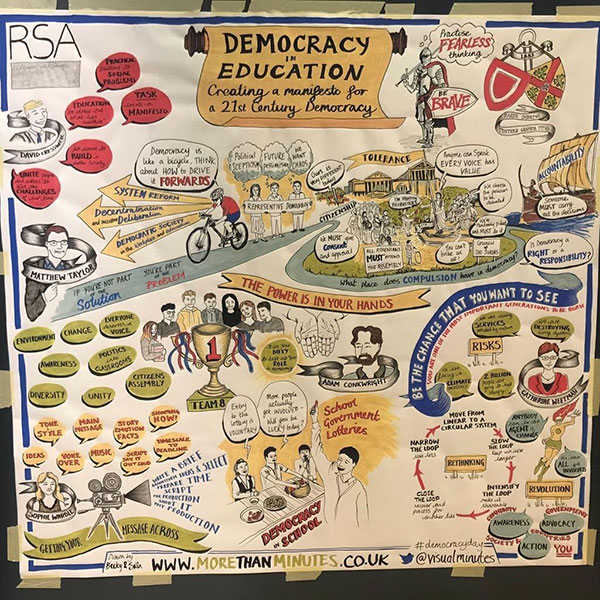 The event took place in National Democracy Week and it’s not the only activity putting people at the heart of democratic reform which is taking place in the North East this Autumn. On 19th November, the People’s Powerhouse are holding their third annual convention at Sunderland’s Stadium of Light and the RSA will be actively involved with workshops on citizens’ assemblies and basic income. A full programme of activities can be found here and bursaries and travel grants are available for those that might need them - let me know if you do - but book soon as places are filling fast.

A pivotal time for democratic reform

These events take place at a pivotal time for democratic reform both nationally and on the global stage. The Scottish citizens’ assembly on the future of the country will meet at the end of this month for the first of six weekends of deliberation and plans are gearing up for the nation Citizens’ Assembly on Climate Change. This follows a recent report in The Economist about the “tiny democracy” citizens’ council being developed in East Belgium. Disappointingly though, the randomly-selected citizens’ ‘Observatorio’ in Madrid – established earlier this year to advise the city council – will most likely be turned back into a body of experts and politicians by the newly-elected administration.

The numbers don’t lie. Many young people do indeed feel disenfranchised and pessimistic about the future, but Democracy Day has shown that there are young people in the North of England from all walks of life that can envisage a very different democratic system that takes power back into its own hands.

Thanks to the hard work of RSA Fellows and the various schools and colleges involved, Democracy Day is just the start. Plans are afoot for a special council of young people to reconvene in Middlesbrough town hall in November and discuss plans to take ideas forward. Huge thanks and congratulations are extended to staff, Fellows, teachers and the students themselves for kicking off such an exciting new initiative.