The public sector innovates just as much as the private sector

We normally don’t think of the public sector as an innovative place.

If there is a cliché that comes to mind, it’s probably a creaking bureaucracy, struggling to keep up with the modern world. The reality is different.

The RSA recently partnered with the global accountancy body ACCA to research innovation in public finance. A global survey of ACCA members, with 4,000 respondents in over 140 countries, found that 91% of the public sector innovated – compared to 90% in the private sector. 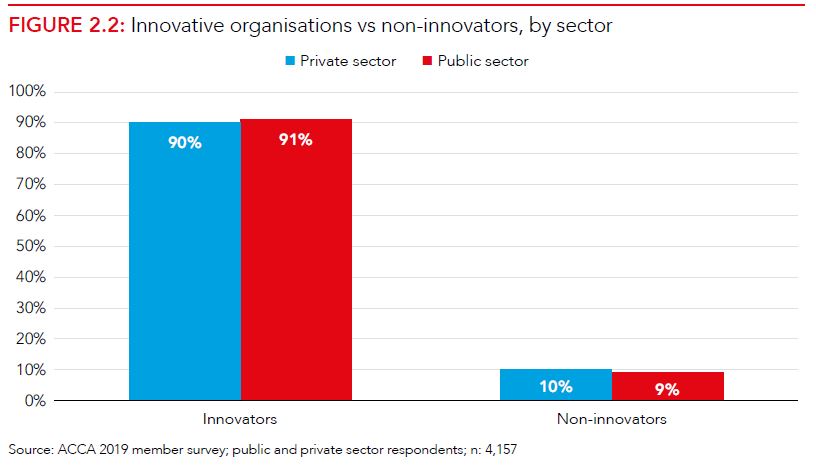 What does innovation look like in the public sector?

To find out if an organisation is innovative, the ACCA survey asked them if they had undertaken any innovation in the last 12 months. For the purposes of this research, we defined innovation as a change or initiative that:

We found three different areas of innovation being carried out by finance teams:

Financial innovation in the public based around people might come as a surprise. In fact, public sector respondents to the survey listed skills and talent shortages as the biggest reason they had to try innovation. 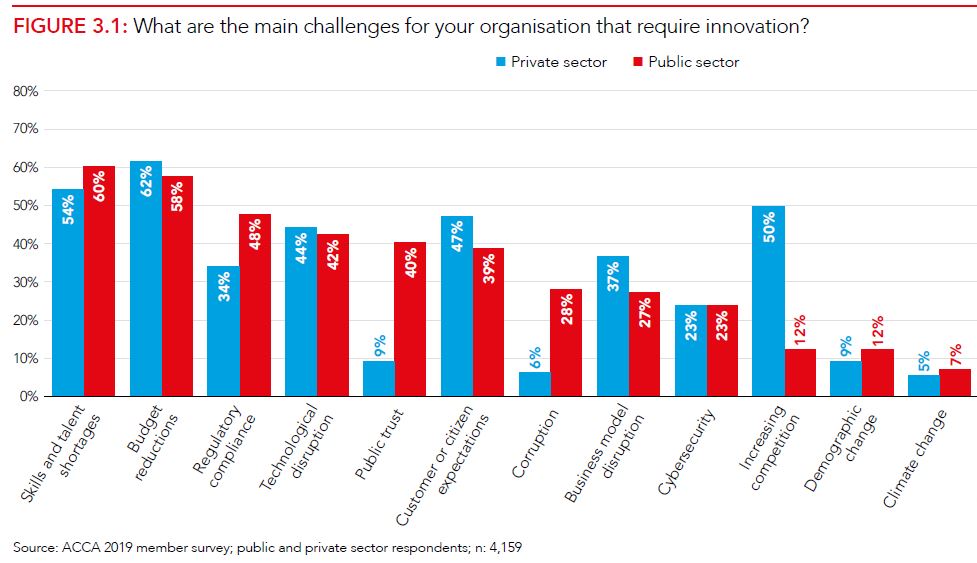 As well as areas of innovation, the report also looks at types of innovation – is it top down or bottom up, and is it radical or incremental?

Incremental change starts by looking for finding more value in what is already being done. Several small changes can add up to a bigger innovation, as in the Home Office example mentioned earlier.

But the research found that this sort of model is insufficient on its own and that there is a desire amongst public servants globally to support more radical innovation.

Examples of a more radical change in finance include Baltimore, USA which started to budget by outcome, not by department. This helped different teams to work together and get money to people who knew how to get things done – in this case, getting money for public health directly to pest control teams.

In Paris, a ‘participatory budgeting’ process put citizens at the centre of the budget process. People were free to submit their own ideas that were then vetted and put to a public vote. Here, the finance team is giving up power to enable a radical change.

(The ACCA report also includes a case study of radical change through self-manged social care teams, a model which is also the subject of an RSA briefing paper.)

Finance teams might not seem like the most likely innovators. These examples show how finance has a critical role to play in helping transformation. A finance team often acts a ‘gatekeeper’ of activity, so is a place where new ideas can be tried. It is also a function that naturally looks at past performance and tries to find improvements – a natural way to try innovation.

At the RSA, we advocate ‘thinking like a system and acting like an entrepreneur’. Change can come from anywhere in a system, but transformation means the ability continuously to experiment and adapt. Leaders – whether of nations or cities – need to enable this.

To have a chance of building and maintaining momentum, public institutions need not only to be renewing their legitimacy and their operating methods but seeing how advances in one domain make possible, indeed demand, advances in the other.

Dynamic change on this scale is risky. Leadership that relies on a predetermined plan, much less fixed outputs, simply will not deliver. We need leaders whose understanding of our challenges and whose determination to make a difference is such that they will openly embark on a journey without knowing where it will end. Any leader who claims to be doing this without often feeling disorientated and vulnerable is deluding themselves.

Ultimately, as the majority of those who responded to the ACCA’s survey recognised, aiming for transformation may be less risky than hoping it can be avoided.