Who in parliament is championing the rights of women?

In the wake of International Women’s Day 2020, Sarah Darrall shares her views on which of our political representatives are taking action and pushing forward a feminist agenda.

Online spaces have provided a platform for fresh feminist discourse to flourish, helping to fuel the exponential rise of fourth-wave feminism. Polling by the Young Women’s Trust found that 67 percent of women aged 18-24 in the UK now identify as a feminist – a sharp increase from 19 percent in 2016, as reported by the Fawcett Society.

So, how is Westminster representing this new tide of young feminists – and who is using their elected power to drive positive change?

The ‘makeup’ of parliament

Despite the media’s ludicrous obsession with female politicians’ appearances (famously the ‘Legs-It’ headline concerning Theresa May and Nicola Sturgeon), I am not referring to cosmetic appearance here. I am talking about who makes up our parliament and the notable imbalance between men and women.

In the 2019 election, 220 women were elected as MPs, compared to 429 men. This is a record for female representation and should be celebrated as such, but the House of Commons still falls short of an equal gender balance.

Stark differences are apparent across the parties.

For the first time in its history, the Labour party returned more women than men to parliament, at a ratio of 104:98. This success has, in part, been attributed to all-women shortlists. This practice has been credited with dismantling prejudices that have previously impeded the selection of women and delivering more equal representation in our first-past-the-post electoral system.

The Conservative party, on the other hand, has just 87 female MPS compared to 277 male MPs: a proportion of less than a quarter. The Liberal Democrats have more women than men (7:4) and a third of the SNP MPs are women. 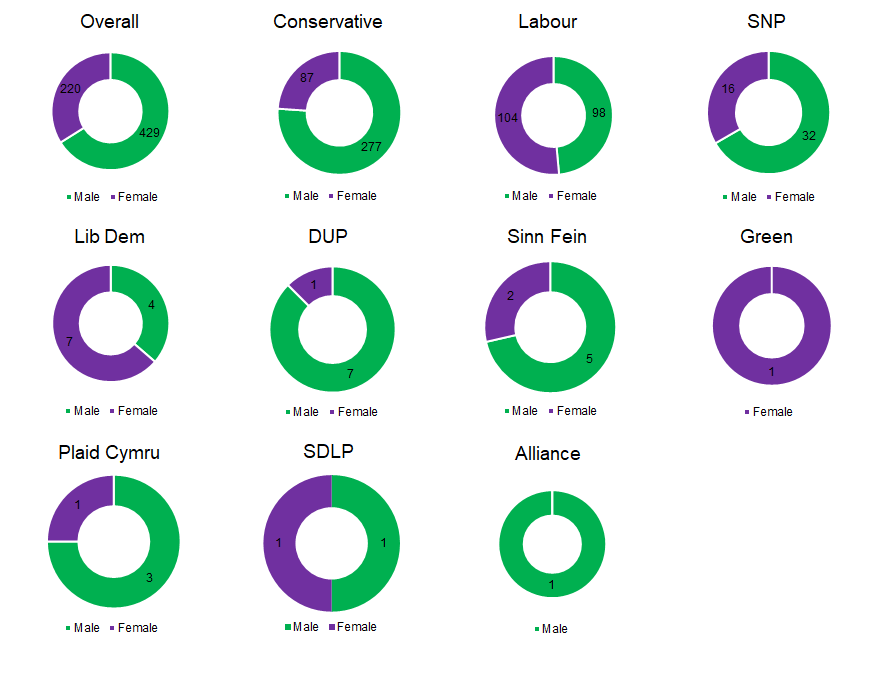 Why does representation matter?

A gender balance in parliament matters because a democracy should be representative of the general population. This, of course, extends to other demographic and background features, including age, ethnicity, disability, schooling and many more. 51 percent of the UK population are women; to exclude their presence and voices from elected office is unjust and detrimental to the health of politics.

The increased presence of women in parliament has raised the profile of issues which have previously been overlooked or underserved by majority male parliaments. These include women’s health, domestic violence against women, and childcare.

The graph below shows how, over the last 20 years, the increase in female MPs is correlated with an increase in government spending on childcare. 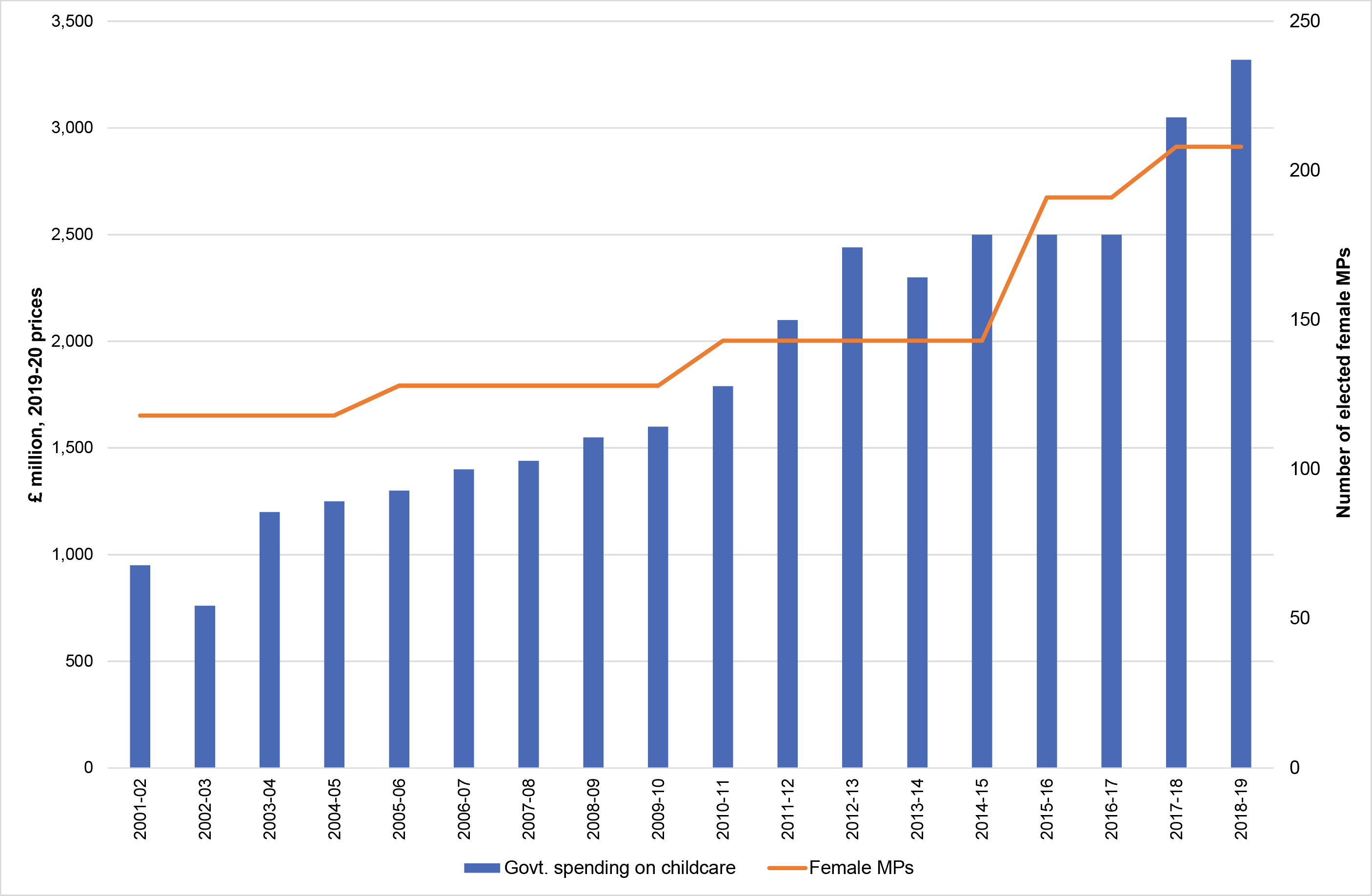 The unequal sharing of childcare responsibilities between men and women is one of the key drivers of the gender pay gap. Women are much more likely than men to drop out of the workforce or go down to part-time after having a child –  and this decision is heavily influenced by the cost and availability of childcare. Access to affordable, high-quality childcare is, therefore, vital in the pursuit of a gender-equal economy.

The very presence in parliament of individuals who have lived experience of this issue, in particular women, increases the likelihood that it will be brought to the fore of debate and assigned the appropriate resourcing.

There is no such thing as a perfect feminist –  an important premise which forms the basis of Deborah France-White’s award-winning podcast, The Guilty Feminist – and the women below are no exception to this. But it is vital we recognise and celebrate the steps that people are taking to facilitate the success of women in all aspects of society.

Jess Phillips has served as the Member of Parliament for Birmingham Yardley since the 2015 general election and recently stood in the Labour leadership race. She is renowned as a strong backbench speaker who amplifies the profile of important issues, particularly around austerity, domestic violence and sexual harassment.

One of her key strengths lies in giving voice to the lived experiences of British citizens and emphasising the people who are suffering behind the statistics. On International Women’s Day 2019, Jess read out the names of the 130 women who had been killed by men in the previous year. This not only highlighted how male violence can terrorise women’s lives, but it paid tribute to those women and gave them the opportunity to be heard.

In response to RSA research on the precarity that women face in today’s economy, Jess commented that “the government have got to stop pretending to care and actually make changes that will end this inequality. We have got to just accepting that women will be poorer and that it is harder for them to work gainfully. The PM (Boris Johnson) claimed to be a feminist, I’ll believe it when he actually changes this.”

She has an impressive catalogue of experience in chairing and co-chairing committees dedicated to the advancement of women’s rights, including the APPG on Domestic Violence and Abuse, the APPG on Women and Work, and the Women’s Parliamentary Labour Party.

Jess continues to stand up, speak up, and hold others to account. She famously challenged Jeremy Corbyn after he failed to appoint any women to shadow the Great Offices of State (Prime Minister, Chancellor of the Exchequer, Foreign Secretary and Home Secretary).

She’s witty, she’s wise and she’s even been dubbed the Caitlin Moran of parliament. Jess brings an honesty and genuine passion for advancing women’s rights to politics.

Caroline Lucas has twice been leader of the Green Party and has been the Member of Parliament for Brighton Pavilion since the 2010 election. She is proud to label herself a feminist and has campaigned endlessly to bring about meaningful change. This has included, but is by no means limited to, the following:

Caroline has a strong set of commendable beliefs and is not afraid to stand up for them. She has shown a crucial desire and aptitude for working across party lines. In their 2019 party manifesto, the Greens committed to supporting women’s economic independence through a Universal Basic Income, which Hannah Webster argued could offer a feminist vision of the welfare state.

Women’s participation in politics is vital for a gender-equal future. When young girls watch the news and can see, say, Nicola Sturgeon leading a party and a country – this matters. She recognises that she has a place, a voice and a value in society. I, for one, cannot imagine a stronger message to champion.