State expectations: what the public want from this week’s Budget

Fiscal policy has always faced a trilemma between borrowing, spending and tax. There has never been an easy answer: elections are fought and won by centring on one of these issues. During the austerity of the 2010s the mantra was that all three should be as low as possible. The winds may be changing.

Ahead of this week’s Budget, we commissioned a poll with Populus to uncover what the public think the priorities of the new government should be.

The results are striking – the swing away from austerity seems more than complete. With both the Conservatives and Labour promising higher levels of spending in the 2019 general election, 49 percent of all voters would prefer the new chancellor Rishi Sunak to address the fiscal trilemma by raising taxes.

40 percent would like to see an increase in borrowing, while just 12 percent think he should cut back on promised NHS, education and police spending. But what is most striking is that the taxes were named were taxes that the majority pay, such as income tax, national insurance and VAT.

It seems like small-state thinking is on the wane: only 10 percent of the public think the state should focus solely on ‘basic regulation’. A shift is happening away from a market-led approach to the economy and society, towards one where government spending and involvement in different industries is seen as a necessity. Recent events, such as the collapse of Thomas Cook and the Brexit process have surfaced an underlying fragility in the economy – combined with promises from both parties at the 2019 election, voters may have become more expectant of government intervention.

Conservatism and the big state

Perhaps the starkest finding from our survey is that even Conservative voters overwhelmingly back a larger state: of those who voted Tory in 2019, just 14 percent think the Chancellor should cut spending, while 51 percent want to increase income tax, national insurance or VAT. There is a growing acceptance of the need for ordinary voters to pay more, and 35 percent of Tory voters want to increase borrowing. Again, this may be a response to challenges posed to the country, such as the question of post-Brexit economic success, or dealing with issues in the healthcare system - no guesses as to why the public is particularly worried about that at the moment.

The new government will have to be adaptable: the public is keen on many policies not traditionally part of the Conservative’s first instincts. 38 percent told us that increasing the pay of the lowest earners should be the government’s mission. This was the public’s largest priority, followed by securing new trade deals and improving productivity. A Green New Deal has only been tabled as a mainstream policy in the past couple of years, but awareness has grown rapidly – 28 percent now support the idea.

A minority of Labour voters support a state-run economy; those who support nationalisation don’t see it as a priority

Our polling also suggests that Labour may have backed the wrong horse at the recent election. Labour voters are in favour of nationalisation, but don’t see it as a priority. 37 percent of 2019 Labour voters would prefer a state-run economy rather than a mixed system (a market-based economy, with proactive government spending), but just 14 percent of Labour voters identified this as a key priority for the country. This chimes with research which suggests that many of Labour’s policies were popular in the run-up to the 2019 general election, but that other factors took precedence in the polling booth.

When looking at the electorate at large, the party also needs to look at the systemic issues which may have played into the last election. There remains a gulf between Labour and the rest of the electorate on nationalisation and a socialist economic model, and Labour will need to consider whether they need to advocate or alter their stance if they want broader support. 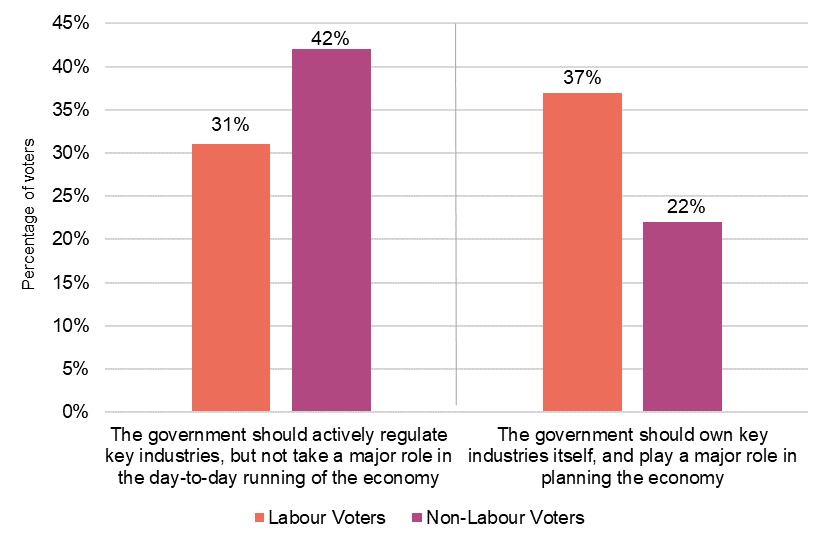 There is hope for the party within these results – particularly in the public’s appetite for workers’ rights, free social care and the mansion tax – but Labour will need to reflect more broadly about how it can reconnect with the electorate. The party must ask itself why it lost so heavily, considering such broad social democratic sentiment both with regards to the economy and the state.

77 percent of the public, including 66 percent of Tory voters, would like to see an improvement in workers’ rights. There is an emerging consensus that existing employment practices are not good enough, particularly for those on irregular contracts. Financial insecurity is rife in the gig economy, and it appears that this insecurity is having an increasing influence on political decisions.

Inequality, too, is creeping up the public consciousness – that 68 percent of Tory voters are supportive of a mansion tax demonstrates an increasing concern about disparities in wealth.

Last month it was reported that the government was considering a tax on the most valuable homes as a means of regional rebalancing – disproportionately taking from London and the south-east to pay for new infrastructure projects in the north. The government has been angling for support in regions where it won over new voters in the 2019 election, ploughing ahead with ideas like HS2 and promising fresh investment across the board. The public has shown some support for their regional agenda: 27 percent feel that the government’s latest buzzword – ‘levelling-up’ – should be an economic priority, a figure consistent across different parties (amongst three choices selected by our respondents).

If the new government wants to win support, it will need to flex the boundaries of what constitutes traditional conservatism. Boris Johnson has already committed to large spending increases, but whether these will be funded by tax hikes – historically a no-go for Conservative voters – remains to be seen.

Serious consideration needs to be given to increasing the wages of the lowest paid – RSA research suggests that this would be one of the best ways of improving the UK’s lamentable productivity growth. The new Budget also needs to provide a game-plan for tackling the widespread economic insecurity faced by the precariat. Personal learning accounts, for instance, could provide a lifeline for those on the receiving end of the disruption caused by automation. An unconditional Basic Income to underpin security and enable greater scope for workers to, for example, develop new skills, shift occupation or care for their families.

The new decade has begun with a new fiscal realism – one centred on spending, tax and borrowing - replacing the logic of the small state and austerity Britain.