The Covid-19 pandemic has revealed the strengths and spirit of those who work in health and care, and brought into sharp focus the life-threatening cracks in the system.

Three years ago, I set up Wellbeing Teams, the first self-managing teams in homecare in the UK. I wanted to create a provider organisation that brought together compassionate care and community connections, delivered by small self-managing teams.

Wellbeing Teams are inspired by Buurtzorg, the most famous self-managing organisation in health and care.

The purpose of Wellbeing Teams is to help people live well at home, and be part of their community.

The first teams were established in 2018, in Wigan (supported by the charity Making Space), Cheshire and Oxfordshire, supporting older people and families with adult children with learning disabilities through personal budgets.

Wellbeing Teams were awarded for their innovative values-based recruitment (by Skills for Care, The Guardian Public Service Awards and LaingBuission), and recognised as one of Nesta’s New Radicals. In January 2019, CQC rated Wellbeing Teams as ‘Outstanding’ (including outstanding in Well-Led).

I was curious to learn how these four areas had been impacted by the crisis.

As Hilary Cottam rightly says, “relationships are the most critical resource”.

In Wellbeing Teams, this means rethinking outdated notions of ‘professional distance’ and actively encouraging the development of relationships between team members and the people they support.

We want team members to bring and share their whole selves at work. Each person supported by Wellbeing Teams has a Link Wellbeing Worker, and we work to keep the number of team members as small and consistent as possible so it’s easier to build relationships.

We recognise that there are challenges (and potentially safeguarding issues) to be faced with such a positive and proactive relationship-based ethos, and we have processes to raise and address any tensions that arise from this.

In the current crisis, there was a risk that the high priority of covering shifts could mean that the focus on relationships would be ignored. This was not the case. In fact, the teams said it became even more important.

“The companionship has become even stronger, and the bonds – I mean, it is part of our practice and something that we do anyway as a team, but that’s being extremely important right now. We’re communicating even more with their families and their friends.”

Decision-making as close to the person as possible, through self-management

Each person we support has a Link Wellbeing Worker. They oversee the person’s support, hold a monthly review of what is working and not working for the person each month, and make any day-to-day decisions around support with the person, the team and their family where appropriate.

In a traditional social care model, a central leader would write rotas. In Wellbeing Teams, teams create their own rotas based on what matters to the people they support.

Gemma talked about how the team were thinking about each person they support and what they could do to help, asking:

“What can we do to fill these people’s days? …because they’re saying the day’s already long, it’s much easier to feel lonely... So, we’ve adjusted some of our visit times, so one person we support would usually have a long afternoon going out somewhere, but that’s actually been broken down into an extra visit every day, so they have that contact, so that’s made a difference.”

When I asked Mary, as Wellbeing Leader, if she had seen any difference in the decision-making during the pandemic, she said:

“I wouldn’t say it’s changed; I would just say it’s brought it into sharper focus, and perhaps it’s made really obvious that decision making lies within the team.”

The wellbeing of the people being supported and community connections

We think about wellbeing and what makes a good week with the people we support, as well as the care they want and their assessed outcomes.

I wondered whether we would be forced to only focus on ‘essential care’ in this crisis.

Early on in the crisis, one person supported by the team in Oxfordshire was suspected of having the virus. She had recently been supported by five team members, who all immediately had to self-isolate. The team quickly liaised with family members to work together to cover urgent care, and other team members stepped up where they could. The situation changed a couple of days later when the person’s test came back negative.

Alongside this, team members have been helping families stay connected, for example by using Zoom to talk to grandchildren and families. One example of our teams paying attention to the wellbeing of people they support was a woman who had an extensive CD collection, but had nothing to play the CDs on. The team rallied around this, with the Link Wellbeing Worker liaising with the family to agree to fund an inexpensive CD player, another team member ordering this and setting it up for the person, and another team member sharing how they listened to the woman’s favourite Opera CD together.

Community Circles and Wellbeing Teams are funded by The Big Lottery to offer ‘Circle Family’ sessions, enabling people to do more of what matters to them in the community. This has had to change with Covid-19, and the sessions are now offered online via Facebook.

Mary described the role of Community Circles in connecting people to what is happening in their community virtually.

“We teamed up with the Community Circles Connector, Megan, who’s supplied us with some iPads and tech. Now we have Wellbeing Workers in people’s homes, helping them connect with their children and grandchildren via FaceTime or Skype, and this has had a really fantastic response.”

The wellbeing of colleagues

Mary described how frightening it was as the virus spread and lockdown was announced:

“we were all pretty frightened, to be honest; we were like everybody, it was a really human response, and I think we all felt vulnerable... and unlike everybody else, we couldn’t stay at home. We were there supporting the people who needed our support, and we were keen to keep working, but I’d be lying if I said we weren’t all frightened for the consequences for ourselves and our families.”

Weekly team meetings and communications over the Slack app are at the heart of communication within Wellbeing Teams, and where you see self-management in practice. Team meetings have now moved from face-to-face to Zoom, but still follow the same format of checking in, raising and addressing tensions, and problem-solving together.

‘Checking in’ moved to a deeper level, as Mary supported the team to talk about their fears and feelings. Mary said that

“sharing feelings of nervousness or joy or fear or whatever the emotion is just as easy to do on Zoom.”

Brene Brown says that if we don’t talk about our fear, it will leak out in different ways:

Mary’s role included making sure that people had the information they needed. She created a new channel on Slack, and used it to post anything that relates to the protection of the team or the people we support.

Each team member has a ‘buddy’ within the team, and buddies have continued to connect but changed the focus of their time together to their wellbeing. Gemma described how the team are checking in with each other more:

“We’ve been picking up the phone and talking to each other, reassure each other... because actually, going back to the fear element at the beginning... you know, we’re all human, and this is a forever changing scenario with the virus, that different people in the team at different times feel vulnerable or worried or anxious about things. So we’re really checking in on each other more, and having more conversation with each other, outside our shifts.”

Finally, Mary supported the team to connect outside of work:

“We’re also doing social get-togethers, and we always did, but they were infrequent, they were if somebody had a big birthday or if there was a particular celebration – but now we’re trying to schedule them in at least every couple of weeks, just half an hour all together, perhaps with a glass of wine for an evening, but just touching base and not talking work at all.”

The role of leaders

Mary has both worked as a commissioner and led provider services. I asked her what she saw as the biggest differences in how more traditional services are operating compared to Wellbeing Teams.

“The response at a team level has been so amazing…The fear that I described at the beginning, that human response, has ebbed away really, the response has been one of absolute sort of generosity to the people we’re supporting.

I imagine if I were in a traditional organisation, I’d be the one constantly liaising with families; I’d be the one trying to placate any concerns; but it’s the team that have taken that on board.

They know the families better than I do; they know how to give them peace of mind and how to connect with them and how to make sure that they know that their loved one is having the best possible care and support... So for me, I think that’s been the greatest difference.”

The national team met with the Wellbeing Workers from Oxfordshire in May, to listen and share stories. At the end, we asked people to share two words that capture their experience of being part of a Wellbeing Team, and created a word cloud (the size of the word relates to the number of times it was used). 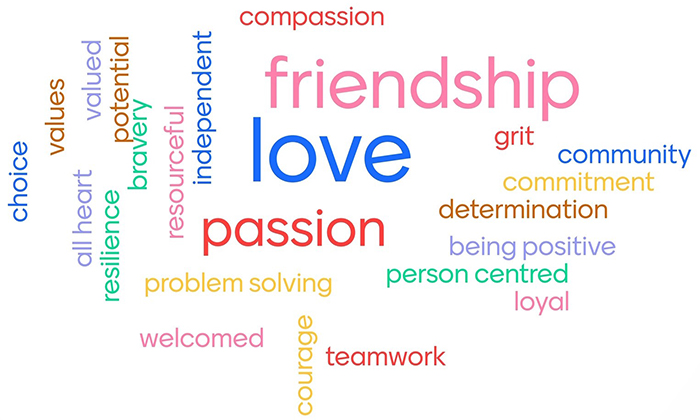 We talk about love.

There are many initiatives aspiring to pull together learning from responses to Covid-19.

I was reassured that the focus on relationships, compassionate care and keeping decision-making as close to the person as possible enabled Wellbeing Teams to navigate the crisis and continue to deliver outstanding support.

We know there are no easy answers in social care. However, the learning from Wellbeing Teams is that relationships, autonomy and trust must be part of the future of people-led health and care.

Join the RSA's community and help shape change in a post-covid world.