Young workers have been greatly affected by the economic disruption and rising unemployment caused by the pandemic.

Young people were more likely to be furloughed, vacancies for entry level jobs have been slashed and apprenticeships put on hold. Recent ONS data shows that employment for 16-24 year olds hit a record low of 3.54 million between July and August, with a record decrease of 191,000 over the last quarter for those aged 18-24 .

The compounded effect of jobs lost to technological transformation paints a particularly bleak picture for young workers. ONS research found that young people, together with women and part-time workers, were most likely to work in a role at high risk of automation. In 2017, 20-30 year olds held over 45 percent of high-risk jobs.

To add to this concern, our recent research has identified signs that the pandemic is in fact accelerating the pace of technological change.

A risk register for young workers

Our latest report sets out a risk register that combines an analysis of the impacts of the pandemic on different sectors, with measures of automation risk and their growth or decline over the last decade.

Unpacking the age demographic of the different clusters clearly shows that workers under 30 are particularly at risk. 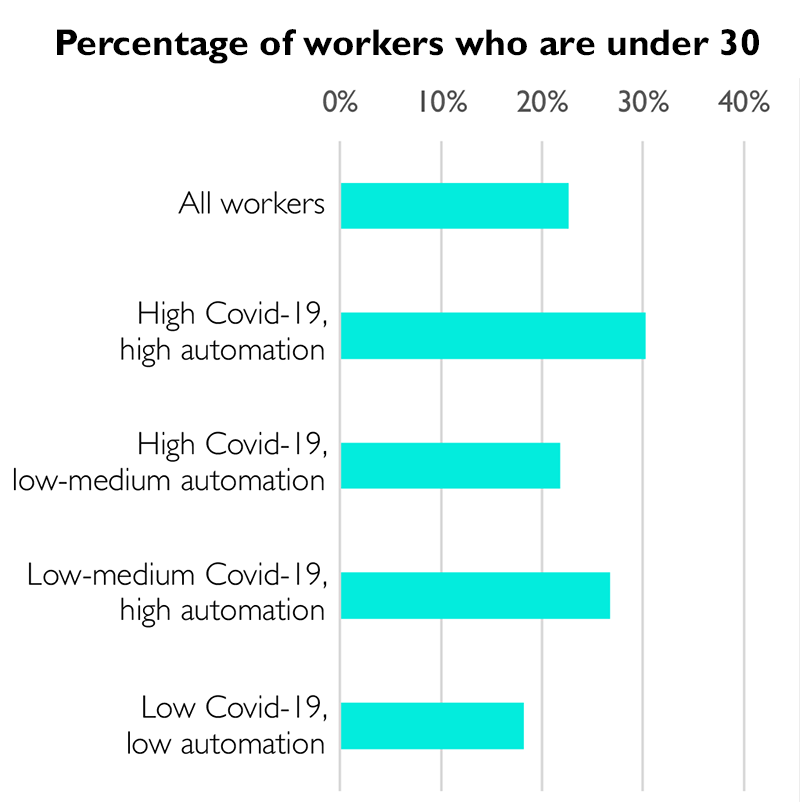 What jobs are young people likely to work in? 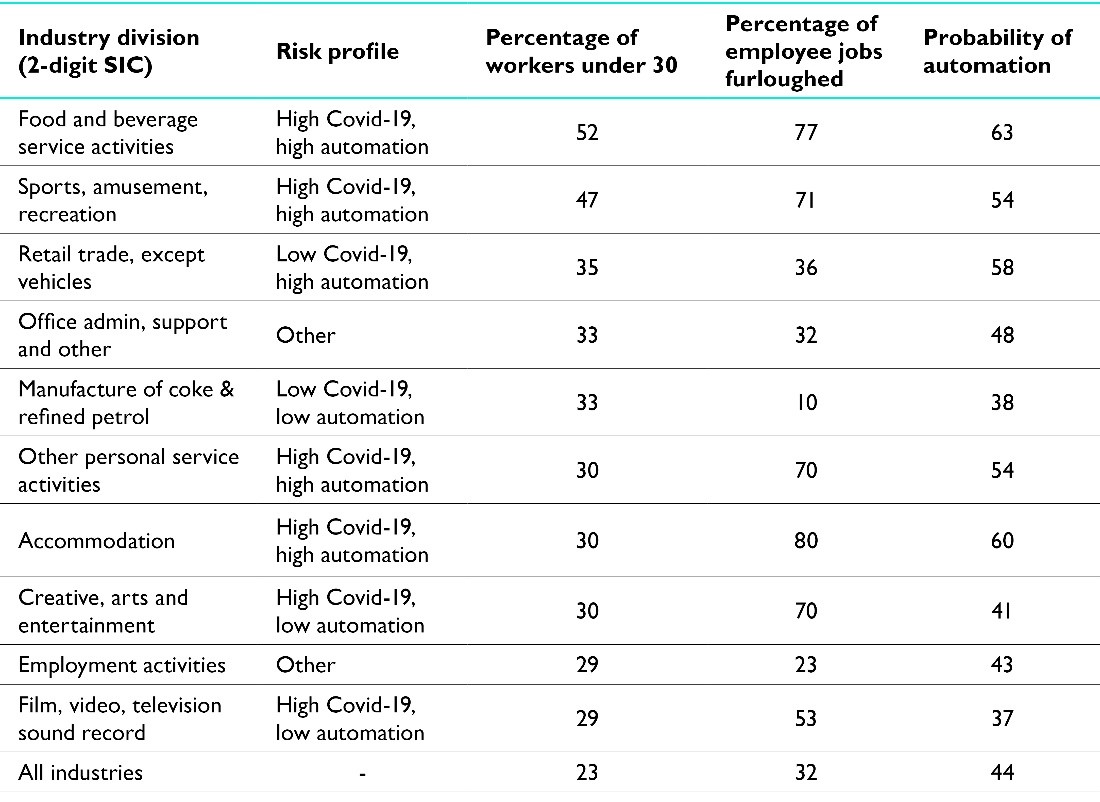 These industries include food and beverage, sports and recreation, accommodation and other personal service activities. Previously, we might have struggled to imagine these sectors as highly automatable, because we assume a preference for human interaction in these service jobs. But the pandemic is disrupting this and accelerating automation, as consumers shift to online experiences with less human interaction. Across hotels in Asia there is a growing preference for “touchless hospitality”, with Korean tech company Yanolja reporting that demand for their self-service check-in kiosks has more than doubled since the Covid-19 outbreak.

The concentration of young workers in the low Covid-19, high automation cluster is primarily accounted for by the fact they represent 35 percent of retail workers. Some sections of retail might not have experienced disruptions in the short term, but might have a longer-term vulnerability to automation. The first signs of this trend include Amazon deciding to open its first cashierless store – Amazon Go – in the UK by the end of the year, with around 30 more planned to follow.

The economic pain of unemployment

Overall, our research highlights how support for young people should be at the heart of policies to protect workers at risk. It is therefore crucial to identify the challenges young people face especially during economic downturns.

Young people are often hardest hit by increases in unemployment during recessions and downturns. They are easier to make redundant, as they are less likely to have permanent contracts, and present a lower turnover cost for employers than more senior workers.

The OECD highlighted how young people at the time of the global financial crisis bore the brunt of the subsequent recession. Recovery after the recession was too weak to solve youth unemployment, which stagnated across OECD countries from 2010 to 2016.

Researchers from the University of Sheffield have also pointed out that young black, Asian and minority ethnic workers have tended to bear the brunt of job cuts during the recessions of 1980s, 1990s and the global financial crisis.

Periods of unemployment and insecurity in the early stages of career development can lead to long-term scarring effects. These include lower income for prolonged periods of time and a higher chance of being unemployed later in life, but also negative effects on wellbeing.

Furthermore, unemployment has a negative effect on skills. This is particularly important, as creating a workforce that can adapt to the impacts of the pandemic and automation will require a sustained focus on skills development.

How can we support young people in the pandemic?

For the reasons outlined above, we're calling on government to support extensive job creation schemes that can benefit displaced young people the most.

In this context, the Kickstart scheme announced by the chancellor in July was rightly welcomed. However, we must ensure that these jobs are truly additional and are not displacing, for example, access to apprenticeships.

Further positive signs towards job creation have been shown by the government’s suggestion that it will create up to 130,000 “green” jobs. The Local Government Association claims that the low-carbon and renewable energy economy could create 700,000 direct jobs by 2030. The TUC is also calling for the creation of an additional 600,000 public sector jobs in areas such as health, social care, education and national and local government.

Job creation alone is, however, unlikely to solve the issue of youth unemployment. For this reason, young people – particularly those employed in the most at-risk industries – could benefit from the introduction of ‘job security centres’: a reimagining of Jobcentre Plus into a universal, end-to-end transition service. This could support periods of transitions for workers that might need to retrain towards more resilient sectors. These workers could then be provided with a transitional basic income, which would help minimise the negative effects on mental and physical health brought about by economic insecurity.

To ensure that all workers can gain the skills needed to adapt to changing labour markets, we’re calling on the government to introduce personal learning accounts, which would provide credits to be spent on training throughout a worker’s life. This policy could first be introduced in sectors that are at low risk of Covid-19 but high risk of automation, with a particular focus on retail to benefit the large number of young people employed in this industry. Upskilling people in retail could contribute to futureproofing roles in this industry: we can imagine the role of a shop floor assistant shifting towards an “in-store influencer” type position.

Young workers are being severely affected by the economic fallout of the pandemic, but they also face an additional risk to their employment: technological transformation. For this reason, support should be targeted to ensure that youth employment is protected both in the short and in the long term.

Read the report: Work and automation in the time of Covid-19