Key workers through the pandemic

Employees in many key industries are suffering burnout, financial hardship and the prospect of catching Covid-19 while at work.

Below we share some of the findings from a new survey of key workers.

Had you asked what constitutes a ‘key worker’ last year, you might have been given a list of emergency services, such as doctors, nurses, firefighters and policeman. The pandemic has changed what we collectively consider ‘key’ work, placing greater emphasis on jobs such as retail workers, teachers, social care workers, and delivery drivers as essential to the wider functioning of society.

The events of 2020 have thrown this broadened category of key workers into the spotlight - their collective efforts have helped to keep the country running. Yet they have also paid for this with poorer mental and physical health, and continued threats to their financial resilience.

Risk of burnout is high across all key workers

The mental health of the nation has been a key concern throughout the pandemic. The ONS has shown in early November life satisfaction was at the lowest it has been throughout the pandemic. For key workers, the physical and emotional toll that we saw in Spring is at risk of being repeated after this second lockdown. The House of Commons Health and Social Care Select Committee even recently opened an inquiry into ‘burnout’ in the health and social care sectors.

Our findings show that they are right to worry. Half (49%) of all key workers feel they are at risk of ‘burnout’ this winter, and 40% said they have felt burnout since the end of the last lockdown. This was particularly true for NHS staff where nearly two in three (63%) said they feel at risk of burnout this winter, closely followed by 58% of those working in social care, and 49% of school and nursery staff.

59% of all key workers thing the government is handling the crisis badly, with only 18% saying it is going well. This is a fairly universal opinion, broadly shared across occupations, gender and regions. The main differences emerging from age, with younger groups taking a harsher tone (63% of 18-24 year olds think the government is doing badly), compared to older groups who are more neutral in outlook, though still not positive. Even Conservatives are split – 36% say it has handled the crisis well, and 33% badly.

Women are particularly feeling the impact on mental health

Women are on the frontline of the crisis. 58% of key workers are women and they tend to be concentrated in the health, social care, and education sectors – roles with high emotional and physical tolls and with the highest perceived risk of catching Coronavirus (see below).

Our findings have shown in both waves that female key workers are feeling the worst effects in terms of mental health – in our November poll 67% said it has made maintaining their mental health difficult, versus 47% of men. What’s more, 45% of women say they have suffered burnout since the crisis began, and 55% say they are likely to suffer burnout over winter – among men these figures are 33% and 40% respectively.

Despite supermarkets and food delivery companies posting record profits, those responsible for providing us with essentials – such as supermarket and food production workers – rank the lowest in terms of financial security of any key worker group. A quarter of supermarket workers would struggle to pay an unexpected bill of £100, and nearly half (46%) a bill of £500. This is coupled with worries about job security: 28% of food production workers are worried about losing their jobs after the pandemic.

With coronavirus cases and deaths rising starkly since the summer, it’s no surprise that NHS workers are feeling pessimistic about the next 6 months - half expect their working conditions to decline. In addition to worries about burnout,67% report worsened mental health as a result of the pandemic. Of these the most common factors were low mood, increased anxiety and a lack of energy.

There have been questions about how medical workers should be rewarded for the extra burden they have faced during this crisis. Several European countries have given doctors and nurses one-off bonuses, but no such support has been announced in the UK. In our survey we found 30% of NHS staff told us that their hours have gone up since the start of the pandemic, but just 12% report an increase in pay. Overall, 57% of NHS staff say they do not feel supported in their role by the government.

How to safely keep schools open has been one of the most contested issues of the pandemic. ONS data shows that secondary school age children have the joint highest positive infection rates of any age groups, despite the rate falling since early November. Our findings show that teachers and nursery staff do not feel safe at work: 72% report a large or significant risk of catching the virus on the job, the highest of any key worker group.

Teaching unions have excoriated the government for its schools policy, and our data suggests that this is representative of how teachers themselves are feeling. Among key worker groups, those in education are particularly angry at a lack of support from Westminster - 66% say the government has done ‘badly’ at supporting them, compared to 53% across all key workers.

Renters are starting to feel the pinch

Our findings show that key workers who rent face harsher economic circumstances than those with a mortgage or who own outright. For instance, when asked if they would struggle to pay an unexpected bill of £100, 13% of mortgage holders said yes. However, this number was doubled to 27% for those in private rented housing and is around 45% for those renting from their local authority or a housing association. 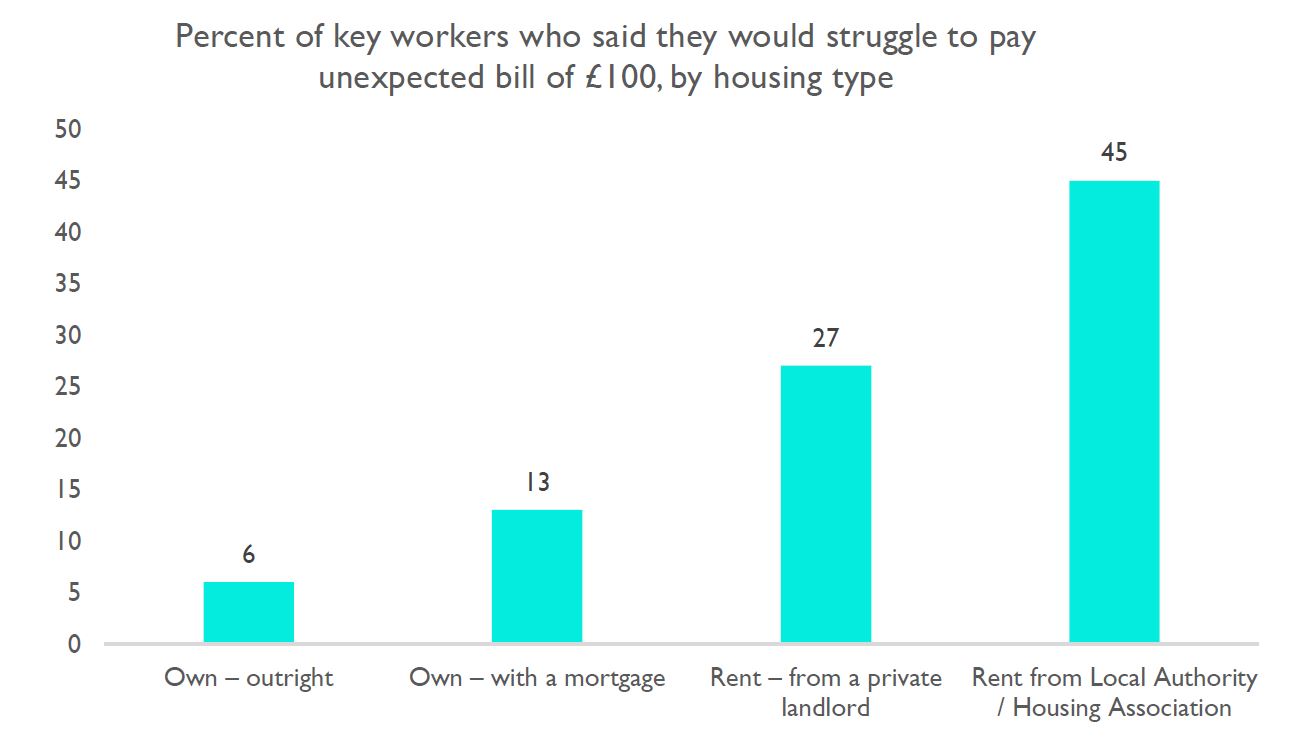 (Caution, however, must be exercised with BME statistics: see page 10 of the report.)

We have also found this statistic was much higher for key workers that were self-employed or whose household member was self-employed, where nearly one in ten indicate they have fallen behind on rent, raising further question for the Government’s much criticised Self-Employment Income Support Scheme (SEISS).

Social care workers are struggling to take time off if unwell

The Government’s test and isolate system has already been much criticised for its relative lack of financial support for individuals asked to isolate, many of whom will have to forgo income in order to do so. This is given as one of the reasons behind the UK’s poor isolation compliance.

We find that 21% of key workers are finding it more difficult to take time off if unwell, but this was especially true for social care workers where 29% agreed with this, which is worryingly unchanged since our first wave survey 4 months ago.

We also know that, of key workers forced to take time off work due to coronavirus (for instance isolating, waiting for results, or caring for children whose school had closed), social care workers were the most likely to report having to take some of it unpaid (34%). Social care workers were also least likely to say they received pay from their employer when taking time off due to Coronavirus (26%) compared to 54% of NHS staff. 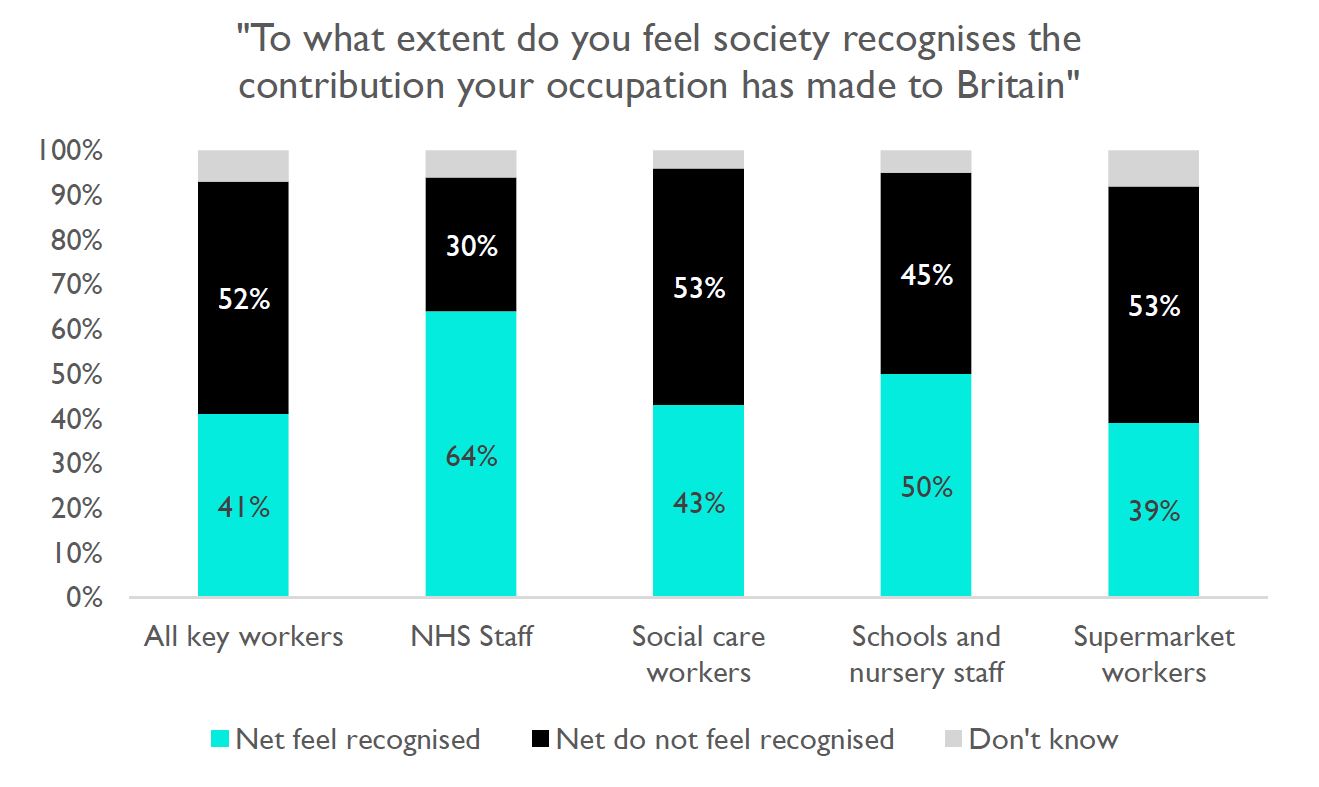 To read the full findings, and what the government needs to do next for key workers, read our briefing here.