Why are the poor dying of Covid-19 more than the rich?

People in the most deprived areas of England are dying at a rate many times higher than those in the least deprived. Part of the answer to why lies in economic security and working conditions. The government must raise sick pay to stop this injustice.

Throughout the early stages of the pandemic, in an attempt to foster a society-wide response to a novel threat, we were frequently told that Covid-19 does not discriminate. The past year has demonstrated the biological impartiality of a virus means nothing in a social context defined by stark inequality, areas of entrenched deprivation and inadequate sick pay for key workers.

The latest Office for National Statistics (ONS) figures bear this out. In December, the death rate from Covid-19 in the areas in the highest decile of deprivation (top 10 percent most deprived) was 392 per 100,000 people, over 2.5 times that of the lowest decile (top 10 percent least deprived) which recorded 152 deaths per 100,000. The graph below illustrates this is a pattern that has been present throughout the pandemic. During the previous peak in April, those in the most deprived areas had a death rate (975) that was 127 percent higher than the death rate in the least deprived areas (429).

The disparity in deaths between rich and poor has tended to be even greater at times when national deaths have been relatively low, as seen in the following graph. One possible reason that may explain this phenomenon is the way Covid-19 spread through the country. The virus first took hold in disproportionately affluent parts of the country in London and the South East, prompting the first national lockdown announced on 23 March 2020. The national lockdown was eased in June when national deaths were falling, but when death rates were still high in generally less affluent areas such as the North West - 111 per 100,000 - while the rate in London was 43 per 100,000. The regional differences stated here are not intended to obscure the local differences in death rates. Even in broadly affluent areas, there are extensive areas of deprivation where the poor still die from Covid-19 (and in general) at a higher rate than the rich. 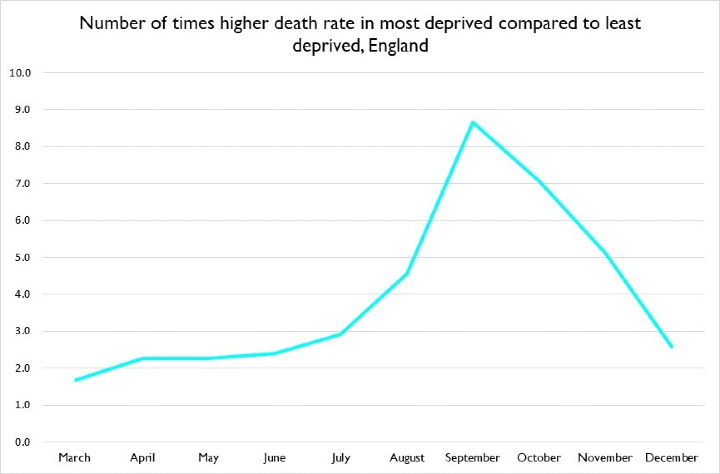 A key factor in the massive disparity in deaths is that differing levels of economic security offer differing levels of protecting oneself from infectious disease. The RSA defines economic security as ‘the degree of confidence that a person can have maintaining a decent quality of life now and in the future, given their economic and financial circumstances.’ Using the latest Covid-19 wave of data from Understanding Society (an annual longitudinal household survey that has been expanded to include shorter, more regular surveys during the pandemic), we can examine some factors that determine economic security and its impact on one’s risk of contracting Covid-19.

The most immediately apparent element in this is whether your job allows you to work from home and protect yourself from the risk of transmission during most of the day. Among all workers, 48.2 percent currently never work from home, while 29.4 percent always do. However, when we separate workers into categories according to their subjective economic security (a measure within the survey derived by the RSA that takes into account a person’s evaluation of their current financial situation and what it will be like in three months), we can see a different picture emerge. 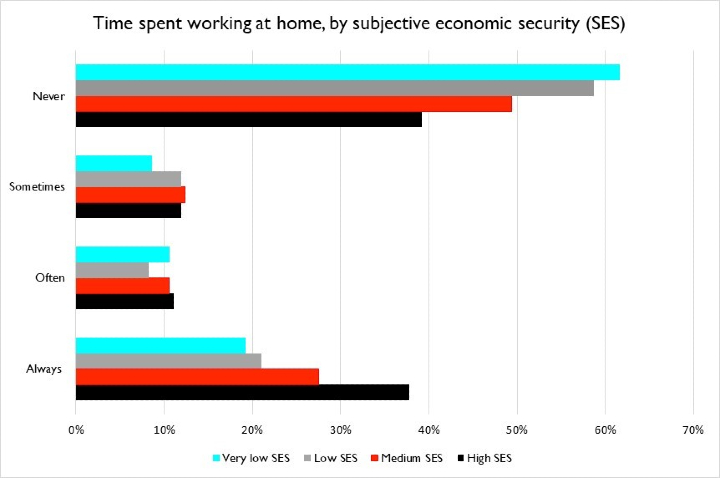 The increased risk associated with such work conditions is also apparent to those experiencing economic insecurity. When asked how likely it is they will contract Covid-19 in the next month, just six percent of highly economically secure people answered ‘likely’ or ‘very likely’, compared with 19 percent of very economically insecure people. (Though the latest wave of data was released at the end of January, respondents completed the survey in November, prior to the height of the second wave, so we can reasonably expect the proportion of people believing it is likely or very likely they will contract Covid-19 to increase across all groups in the next wave, which is currently in the field.) In addition to their increased exposure to infection and perceived likelihood of contracting coronavirus, economically insecure people are more likely to suffer from acute forms of Covid-19. 14 percent of people with low subjective economic security are classed as extremely clinically vulnerable, compared with five percent of the most economically secure. This suggests that very economically insecure people are more likely to work in jobs that expose them to Covid-19, are more likely to be seriously ill if they contract the virus and accurately perceive themselves to be at greater risk of getting coronavirus.

The pandemic and long-term conditions

The RSA is exploring the connections between the pandemic and economic security and its impact on people with multiple long-term conditions in a project run in collaboration with Guy’s and St Thomas’s Charity (GSTTC). Health and economic security are closely connected. Recent research commissioned by GSTTC indicates that 90 percent of the people they spoke to with long term conditions believe that their finances affect their health, while two thirds think their health also affects their finances. This is often manifested through work. Take, for example, the case of Shannon, a 55 year-old single mother with four teenagers. She has multiple long-term conditions, including knee, shoulder, neck and spine injuries, schizophrenia, and other mental health conditions. Together, these conditions effectively exclude Shannon from the formal labour market. When she was able to find work, Shannon struggled to juggle childcare, bills and precarious working conditions that aggravated her existing health problems. The result was a vicious circle of deepening economic security and worsening health.

These alarming figures warrant immediate action from the government. The least economically secure workers are those who are most likely to be exposed to coronavirus in the course of their work. They are also the least likely to be able to self-isolate if they contract Covid-19 or are exposed to someone who has tested positive. At present, the government’s statutory sick pay (SSP) applies only to those earning at least £120 per week, thereby excluding 2 million of the country’s poorest workers. In the summer, the RSA estimated that 79,000 care workers (11 percent of all care workers) earn below £118 per week and are therefore unable to claim SSP. The RSA called for the expansion of SSP to all workers, offering a degree of economic protection to those most exposed to coronavirus.

Even discarding for a moment the huge gaps in SSP provision, the amount offered is pitiful – at £95.85 per week, it is barely 20 percent of the average weekly earnings in the UK. To offer truly adequate protection to workers, the government should follow the example of other OECD countries that have substantially strengthened sick pay provision in the pandemic. Among these countries, a four-week spell of illness with Covid-19 is covered by sick pay equal to an average of 70 percent of an employee’s wage. This is in stark contrast to the only change to SSP in the UK, which extended it to the self-employed and now starts from day one of illness.

To effectively combat the spread of disease, reduce mortality and increase the economic security of the workers hardest hit by the pandemic, the government should increase SSP to match the OECD average of covering 70 percent of income during the first four weeks. The Resolution Foundation has calculated that increasing the SSP to £160 per week would cost the government £200m. A back-of-the-envelope calculation suggests the increase to 70 percent of wages would cost £720m. Though a large amount, it pales in comparison to the Institute for Government’s estimate that the pandemic has cost the government well over £300bn. An increase in sick pay to the OECD average would help protect the incomes, jobs and lives of workers while the expenditure would be a rounding error in relation to the total cost of Covid-19 to the government.