Sizing up the green jobs revolution

The UK will need to create new jobs in the low carbon and renewable energy economy in order to meet its net-zero targets. But will this offset jobs lost in carbon intensive industries?

What are green jobs?

The UK government hopes to create 250,000 green jobs by 2030 and 90,000 this Parliament. Meanwhile the Labour party has suggested as many as 400,000 could be created. According to research commissioned by the Local Government Association (LGA), there could be as many as 700,000 jobs created in the low-carbon and renewable energy economy, rising to over 1.2m by 2050.

Many of these jobs will be in the construction and manufacturing sectors and are expected to be relatively highly skilled and well paid. Currently these sectors account for 34 and 31 percent of total employment in low carbon and renewable energy economy respectively, according to the Office for National Statistics. 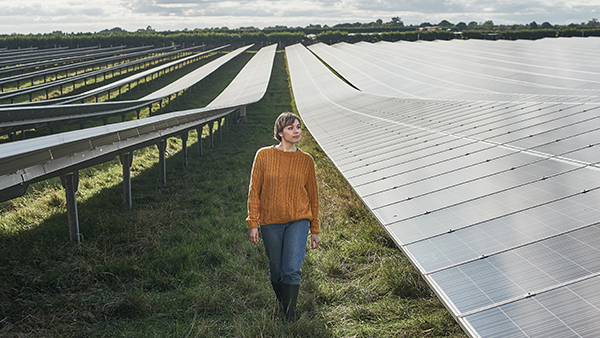 The LGA’s research provides the following more detailed breakdowns of where new green jobs will be created:

Lastly, it is important to note that there could also be green jobs that are not included in these definitions that focus on specific sectors. A broader definition would also incorporate jobs that ‘green’ traditional industries such as retail and healthcare through circular economy business models or more sustainable approaches to resource use.

In 2018, the UK government projected that green jobs could grow by 11 percent per year up to 2030, substantially higher than projected growth rates for the economy as a whole (1-2 percent). And many countries are investing in green jobs as a strategy for post-Covid recovery. However, several commentators have expressed scepticism around the net employment gains of the green jobs revolution.

According to the LGA’s research there is some evidence to suggest that renewable energy technologies are more labour intensive compared to fossil fuel-fired electricity generation. But the equation here is more complicated. For example, renewable energy sources will not require the same supply chains as fossil fuels. According to Maritime Strategies International, decarbonisation could have a negative impact on the shipping trade. A wind turbine or solar panel only needs to be shipped once, after which the electricity it generates is transferred via the grid, unlike oil which needed to be regularly imported via tanker ships and trucks.

A green transition will also require shifts in consumer behaviour, which will have knock-on effects for carbon-intensive industries that are not directly related to energy production. For example, if we fly less, what will that mean for the 75,000 people who work in air travel, and the many more who service the major airports such as Gatwick? We have seen something of a preview here during the pandemic, with Crawley having one of the highest levels of furlough take up in the country.

Similarly, the arrival of Mobility as a Service (MaaS), which is often associated with autonomous vehicles would represent a shift away from car ownership and towards more on-demand modes of vehicle rentals and transport, resulting in less cars on the road and a reduction in the production lines of vehicle manufacturers (who employ nearly 200,000 workers). More generally, electric vehicles are expected to have longer lifespans than today’s cars due to reduced vehicle wear.

Towards a just transition for at risk communities

Green jobs will need to be created for the UK to meet its net-zero targets. But jobs will also be lost in carbon intensive industries. These impacts will also be felt unevenly across the country. Research from the European Investment Bank suggests that green job gains are expected in many regions, while job losses will be concentrated in a few, particularly those dependent on industries like fossil fuel extraction or car manufacturing.

In the UK there is perhaps a better sense of where green jobs will be created. According to the UK government’s Ten Point Plan for a Green Industrial Revolution: “There will be electric vehicle technicians in the Midlands, construction and installation workers in the North East and Wales, specialists in advanced fuels in the North West, agroforestry practitioners in Scotland, and grid system installers everywhere”.

The LGA’s research also provides estimates for green job creation at the local authority. But as Financial Times journalist Sarah O’Conner points out, the government is yet to publish granular analysis on the geographical distribution of jobs that will be most affected by the transition to net zero. This kind of modelling is not an easy task. Definitions of dirty and green jobs don’t easily map onto official statistics. So, we will need to explore creative approaches and new data sources to answer these questions.

This kind of analysis will be critical to ensure that workers that are well positioned geographically to benefit from the green jobs revolution are supported to develop the right skills. But also, to ensure that those communities that are at risk of being left behind can access opportunities in other growth sectors, including in tech and social care.

These issues are at cross section of two of the RSA’s major programmes, the future of work and regenerative futures. We will be exploring them in more depth in the coming months. If you are interested in contributing your expertise, please get in touch.