What we see when we see transparency

Due to a popular lack of demand I haven’t written much recently about social coordination theory. Yet it is one of the most powerful ways to analyse complex social problems and to develop effective solutions. I spoke this morning to the Transparency Task Force and it gave me an opportunity to apply the theory to the issue of corporate openness.

First, a very brief recap of the theory:

My own approach focusses on the four modes as approaches to the challenge of social coordination. Human beings are complex social beings who have to work together to survive and flourish. The hierarchical perspective puts emphasis on leadership, strategy and expertise as the way to coordinate human activity. The solidaristic view emphasises the glue of belonging and shared values. The individualistic view sees coordination as emerging largely spontaneously and its goal being to provide a platform of individual ambition and competitive endeavour. The fatalistic view sees effective coordination, variously, as intractable, unlikely to deliver intended outcomes or irrelevant to the things that make it hardest to be human.

Each mode has a substrate in human evolution and psychology – these competing theories have emerged from who we are as a species. Each mode or combination of modes has been dominant at different times in our history. Also, each mode generates behavioural and ideological predispositions: Solidaristic views – which emphasise membership and values - are often associated with rigid ideologies (on both the left and right); individualism goes with liberal attitudes (again of both left and right varieties).

In a kind of fractal which stretches from individual preferences to global problem solving, each mode is available as a perspective on complex social problems. Crucially, for the kind of problems which the modern world increasingly generates, the best solutions will combine aspects of each method. But there is a problem: each mode is, in part, a critique of the others. Each has both benign and malign aspects; hierarchy can be strategic and overbearing, individualism can be enterprising and selfish, solidarity can be altruistic and tribal, fatalism can be stoical and defeatist. The theory explains why success can so quickly turn to failure. Even when the modes are successfully combined – what I call a ‘fully engaged’ solution – internal dynamics or external shocks will sooner or later upset the balance.

This is all rather theoretical so let me be more concrete. If we are trying to solve a problem like encouraging and enabling a corporation to be more transparent we need to understand the arguments both in favour and against such a move from each of the perspectives. If we don’t many people, many ideas and many approaches will be ignored. In short, we will be much more likely to fail.

Here is a simple guide to what might be seen as the pros and cons of greater transparency from the four standpoints: 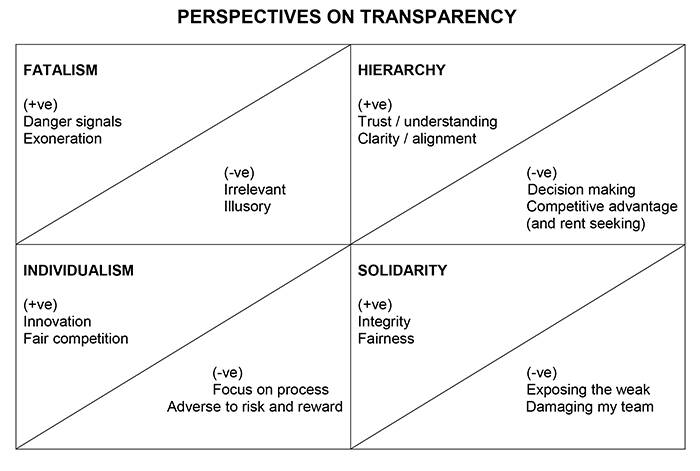 People in authority and those who see things from a hierarchical perspective (we all see things from different perspectives at different times and in different places) will worry that transparency will make decision making more difficult and that, by opening up things like the underlying business model to scrutiny by customers and competitors, it would threaten the interests of the organisation. Conversely, the hierarchical case for transparency is that it can increase trust and understanding towards leaders and the challenges they face and it can aid alignment, clarity and commitment by exposing practices that don’t fit with corporate strategy.

Those who approach things from a solidaristic perspective are often the most outspoken champions of transparency. They see it as increasing integrity as companies have to live up to their stated values and fairness as unfair practices are exposed.  However, there are also solidaristic concerns; what if transparency exposes vulnerable people or if transparency makes life harder for the team to which I belong (the company or my part of the company)?

From an individualistic starting point transparency can be viewed suspiciously as promoting a focus on process rather than outcomes and also being adverse to risk and reward (you can justify the means by the ends only if you have been able to achieve the ends without someone looking over your shoulder). On the other hand, the individualistic case for transparency can cite its contribution to innovation (by looking under the bonnet and seeing all the working parts we have better insights into what can be improved) and the promotion of rewards based on fair competition instead of covert rent-seeking or organisational nepotism.

Finally, those in a fatalistic mind set will tend to see transparency as either irrelevant or – and this is a more forensic critique – illusory (the secret stuff will just get hidden better). However there is also an appeal to be made to fatalists that transparency can help reveal warning signs of future dangers and make it easier to mount a defence when things go wrong (‘even if we failed, we can show that we tried’).

To win the case for transparency and also to implement it effectively its advocates need to stress the positives from the different perspectives and also address the legitimate concerns; both of which should make it easier to confront objections that are not reasonable.

Social coordination theory provides a relatively simple way of diagnosing systems and identifying how to develop solutions. This is useful as a weakness of systems thinking can be its complexity. At the RSA we sometimes talk about ‘thinking like a system and acting like an entrepreneur’. The dynamic interplay of the four modes I have described means that solutions are always fragile and contingent, but by seeing underlying patterns we can develop initial interventions in complex systems and have a prism through which to track whether those interventions are helping or hindering the search for a new and better equilibrium.