How do we ensure that the digital economy doesn’t leave people behind?

Every industrial revolution is greeted by optimists predicting the coming of a leisure society and doom merchants foretelling mass unemployment.

Headlines like ‘the robots are coming’ or ‘millions of jobs at risk of automation’ may dominate the newspapers - but we know the truth is somewhat more nuanced than that.  Today there are more people employed in the UK economy than ever before; in many places a shortage of workers is a more pressing problem for our economy than a lack of jobs.

Furthermore, while there is no question that certain sectors will be strongly impacted by AI and robotics, there is only so much we can know about these changes in advance. More important than prediction is preparation.

In the absence of a crystal ball, the starting point for the societal conversation about technology must be the values that we hold: the kind of society we want to be. We want growth, yes, but we want it to be inclusive. We want economic prosperity, but not at the cost of precariousness and security.

It is a battle that by all accounts we are not currently winning. In the US and in many mature markets, technology has created some highly paid, high skilled jobs. But since the 1990s we have also seen low wage jobs grow twice as fast as middle-wages jobs. This has left many people in precarious jobs with low pay and volatile incomes. 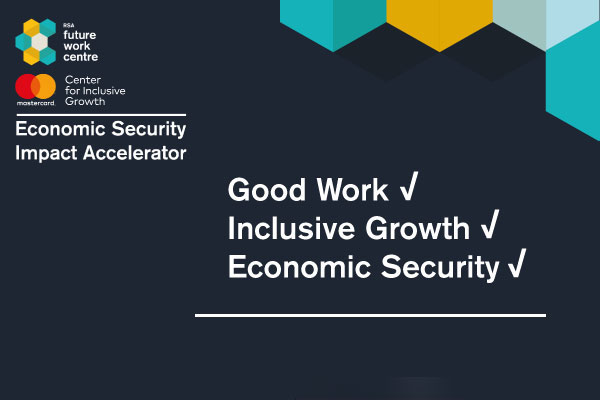 Just as technology has shifted the economy of the future, so can new, socially impactful forms of tech help make that economy fairer and more inclusive. This is not merely wishful thinking: we have seen this in action. The entrants to the RSA’s Global Future of Work Awards were a diverse spectrum of WorkerTech initiatives making a difference to workers’ lives here and now. And that is why, to explore the positive potential of tech to support the future of work, the RSA is working in partnership with the Mastercard Center for Inclusive Growth on a unique Economic Security Impact Accelerator.

The idea is to support and scale up a cohort of initiatives, chosen from the Future Work Awards applicants, that has the potential to address the economic insecurity that will be borne by the most vulnerable of citizens, through technology and social innovation. Members of our cohort include Trezeo which provides an income smoothing bank account for gig workers that tops up earnings, interest free, during quiet periods and French start up Bob Emploi which uses artificial intelligence and big data to give jobseekers a personalised assessment of their job prospects and advice on how to re-enter the labour market.

Another important dimension to the accelerator is a focus on place. Although the UK Government is committed to inclusive models of growth, some of the best thinking, across the world, is among local leaders. Working with tech innovators and supported by the skills and insights of the RSA and Mastercard teams, we want to explore how scaling up innovation could make an observable difference in certain localities.

Just as the future of work can seem worrying to many people, so the world of fintech can appear to be focused on the needs of the privileged. The Economic Security Impact Accelerator will show how emerging technology can make working lives better and highlight how so many of today’s innovators can be both commercially and socially successful. This project is about supporting the companies that can help build the economy that we want to live in, not just the ones with the biggest potential profits.

These are gaps that our work and the Economic Security Impact Accelerator seek to fill. The world is changing, but we are optimistic about the opportunities that lie before us – if we build on the good will and ingenuity of socially minded entrepreneurs on the ground. The key to driving inclusive growth will be partnerships that harness that ingenuity. We want to change the conversation away from fear, to hope and illustrate that business and technology can create a new future of work that benefits everyone. The Economic Security Impact Accelerator is an example of one key partnership that we hope will move the needle in the right direction.

Find out more about the Economic Security Impact Accelerator