A parable for our times

‘When the dog bites, when the bee stings’ – a modern parable about the Large family and how they ended up going to see a film almost none of them liked (with apologies to Jill Murphy) 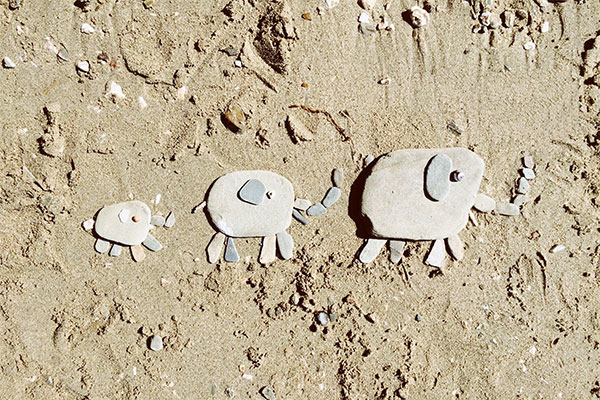 Mrs Large was getting very annoyed. It was hard enough being in charge of a family of elephants without them spending all their time bickering.

‘I’m bored – there’s nothing to do here. I want to go out’ said Grandma Large.

‘So do I’ said Uncle Large.

Not everyone agreed. The children – Lester, Laura, Luke - were happy to stay in and play.

The arguments were so bad Mrs Large couldn’t get anyone to do anything she wanted around the house. In the end she gave up.

‘Family meeting!’ she announced in her most bossy voice.

All ten members of the family gathered around the kitchen table, Mr and Mrs Large, the four Large grandparents, Uncle Large and the three children. Soon they were having a big argument. Both the grandpas and one of the grandmas wanted to go to the cinema as did Mr Large, even though he started off not able to make up his mind. Most of the others wanted to stay at home. The arguments went to and fro.

‘We’re sick of staying in and being forced to watch foreign rubbish on TV’ said Grandma Lilly.

‘But the cinema is really hard to get to and it costs a bomb’ said Mrs Large.

In the end there was nothing for it but to have a vote.

‘All those in favour of going out, raise your trunks’ said Mrs Large.

When the trunks were counted it was five to go out and four to stay in. In all the commotion the youngest, Luke, had wandered off so his vote didn’t count.

‘Well’ said Mrs Large with a sigh ‘it looks like we’re going to the cinema’. ‘You know that’s not what I wanted so I’m going to put Grandma Lily in charge of making the plans’.

Before anyone could stop her, she had picked up the phone and dialled the number.

‘OK’ said the cinema manager ‘but don’t you want to know what’s on and how much the tickets are?’

‘No, we don’t’ said Grandma Lily rather rudely ’there are ten of us and we are very large so I am sure you will let us choose whatever film we want and pay whatever we think we can afford’

‘But that’s impossible!‘ said the manager ‘there are rules and what about all my other customers?’.

But by that time Grandma Lily had slammed down the phone.

A few minutes later all the elephants had put on their hats and coats and scarves and were on the way to the bus stop.

If anything, the family were arguing ever more. ‘See’ said Grandpa Len ‘I told you the journey would be fine’.

‘Yes, but we’re nowhere near the hard bit’ warned Lester.

‘And we still don’t know how much we’ll have to pay’ said Laura.

On the bus things went from bad to worse.

‘Excuse me’ said Grandma Lou to the conductor ‘do you know what films are on at the cinema?’

‘Oh yes’ he replied, ‘I think there’s only two tonight ‘The Exorcist’, on the small screen, and ‘The Sound of Music’ on the big one’.

Suddenly everyone was shouting. ‘The Exorcist – brilliant !’ cried Grandpa Len and Uncle Large. ‘That’s just the kind of excitement we want. A bit of horror will toughen us all up ’.

But most members of the family were dismayed.

Grandma Lily was getting flustered. Look’ she said ‘I’ve booked the tickets now, so we have to go. How about ‘The Sound of Music’, that’s not so bad?’

But almost no one agreed.

‘We could have watched that at home if we’d wanted to’ said Lester ‘it’s not worth all the effort’.

‘It will be full of other people and we won’t even get good seats’ complained Laura.

‘The doors are small so we won’t all be able to leave when we want to’ said Grandpa Lucas.

Everyone was shouting at once but by this time they were on their second bus, which was rocking from side to side as the elephants pushed and jostled each other, and it was getting closer and closer to the cinema.

Then Mr Large, who had been sitting patiently waiting for his chance to be heard, piped up; ‘I’m sorry Grandma Lily but you obviously can’t sort out this mess. I am taking charge’.

He drew himself up to his full and impressive height and said; ‘we all decided to go to the cinema and none of us want Lily’s choice of the soppy old ‘Sound of Music’, so you need to prepare yourself for a bit of blood and guts’.

At first the family couldn’t believe it, but Mr Large wouldn’t budge and Grandpa Len and Uncle Large were right behind him. The other elephants started to get more and more frightened. ‘Anything but that’ they cried.

They were off the bus now and on the final part of their journey. Then Mr Large did something surprising. ‘Look’ he said ’as you are all scaredy cats, I’ll give the cinema a ring and see if they can give me a better offer’.

A few minutes later – as the cinema came into view - he came off the phone with a happy smile on his face.

‘Guess what’ he said, ‘I have forced the manager to make us a great offer’.

‘He says that if we go to The Sound Of Music, even though it will be expensive and even though we will have seats at the back, he will let us leave before the end as long as everyone else in the cinema agrees to help push us through the door’.

The elephants looked from one to the other. This didn’t sound any better than Grandma Lily’s plan. They started to protest.

‘Now we know what’s on’ said Laura ’I think more of us would like to go home than watch either film. Can’t we have another family meeting?’.

But Mr Large spoke again. With Grandpa Len and Uncle Large nodding on, he shouted ‘it’s either The Exorcist or The Sound of Music and even though the films don’t start for half an hour I’m only giving you two minutes to decide’.

And so that’s why the whole Large family ended up going to see a film that almost none of them wanted to watch. They didn’t have much fun, they continued to argue, and they ended up finding it harder to leave that they thought.

As the cinema lights dimmed, Uncle Len whispered to Mr Large; ‘to be honest this has all been a bit of mess hasn’t it?’

‘That’s as maybe ’said Mr Large ‘but the important thing is that now I am in charge’ and with that he lifted up his great big trunk and bellowed with joy.