Many would argue that women’s rights in the 21st century are almost equal to those of men. Alex Krawiec FRSA argues that in reality, ‘almost’ can translate into gross discrimination against women’s right to personal decisions, especially those regarding sexuality and motherhood. 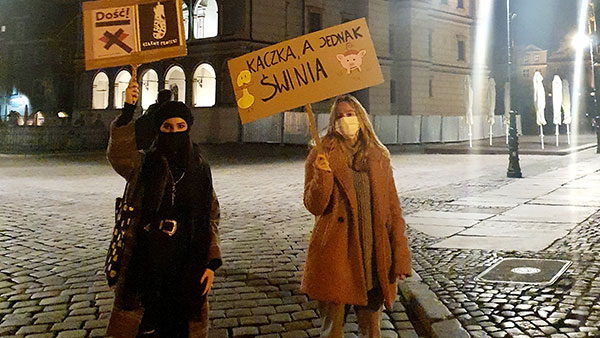 Despite the fact that nearly 50% of the Polish population supported the 1993 Act on abortion, the ruling party ‘Law and Justice’ (PiS) wants to ban this right, or at least reduce it to minimum. In 2016 news that Polish women were taking part in the ‘Black Protest’ (also known as ‘Black Marches’), circulated the world. The marches were a backlash to the government’s proposal, and their attempt to introduce up to five years of imprisonment for women undergoing abortion in circumstances other than those listed act.

The 2016 protests were successful, but not for long. In 2020, despite pressing issues caused by the second wave of the COVID-19 pandemic, Poland’s Constitutional Tribunal revisited the old law, which had been supported by most Poles, and ruled an almost complete ban on abortion. Thousands of people took to the streets of Poland again, protesting against these changes. Current protests concern the new amendment to the 1993 Act, which would only allow for termination of pregnancy when severe or irreversible defects of the fetus are present. Now PiS claims that termination of any pregnancy, except that resulting from rape, incest, or when a mother’s life is in danger, is unconstitutional and against their ‘pro-life’ politics. Some government officials compare aborting a heavily defected fetus to the practices promoted by eugenicists —a comparison met with outrage by ‘pro-choice’ campaigners.

What has been happening in Poland is quite symbolic. These protests are not in support of any individual or organisation, but they are about freedom of choice for all women: mothers, prospective mothers and all those who decided that motherhood is not for them. What the ‘pro-life’ movement believes to be a sin, the ‘pro-choice’ supporters see as a basic human right.

In Poland, conservatism and religious fundamentalism are deeply rooted in times when the church ruled over our ‘souls’, while the state had a lot of power over our bodies. These once separate parties now work hand in hand in Poland. But, unlike in the past, today people are no longer afraid to stand up to either of them.

It seems that the current social schism reflects the conflict between those who adjust their views to match the facts, and those who desperately try to preserve the past by holding on to their beliefs. For the latter, all laws dictated by the church are set in stone, and there is little, if any, space for discussion. Many proponents of abortion being a choice that needs protecting, acknowledge that there are some uniting cultural and universal values in religion; where as the pro-life movement, strange as it sounds, equates liberalism with evil forces and sees it mostly as a threat against family values. For those like Jaroslaw Kaczynski, leader of PiS, abortion is a dangerous, therefore unnecessary, privilege, which stands against God’s laws. These equate abortion of a fetus to the murder of a baby, and this perception stokes conflicts. In 2016, Kaczynski infamously said that once conceived, all babies, even those destined to die, must be born, baptised, given a name and buried. Unsurprisingly, many do not share his view.

The vast majority of the ‘pro-choice’ supporters I have talked to agree that abortion is a vary serious decision. Claiming that women should not have the right to abortion because they do not understand what they are doing, or because they do not take it seriously enough, is preposterous. Besides, most human decisions carry some risk, but this should not be a reason for governments to take away our rights in order to prevent us from making mistakes. Strangely enough, when it comes to reproductive rights, politicians, mostly men, claim to ‘know better' than prospective mothers what would be best for them.

With a nearly total ban on abortion, Polish women in difficult circumstances would be left without support. Some would travel abroad, some might choose to resort to illegal or cheap options provided by under-qualified ‘specialists’.  Strangely, at the same time that anti-abortion laws are being introduced in Poland, women who struggle to get pregnant and decide to become mothers via ‘in vitro’ methods are also heavily discouraged or denied their right to motherhood unless they meet strict requirements.

After almost two weeks of daily demonstrations, which gathered over 100,000 protesters, president Andrzej Duda eventually took his stance. Just before the unofficial results of the 2020 presidential election in the US were announced, Duda, a supporter of Donald Trump, proposed a compromise, which is a legalisation of terminally damaged fetuses, but not seriously deformed ones. This is not a solution that the pro-choice protesters have been seeking, therefore it is likely that public backlash will continue in some form.

The pro-choice demostrations brought together opposing camps and triggered an avalanche of grievances towards the ruling party, and its once powerful, but now weaker than ever ally — the Catholic church. Demonstrations revealed not only a deep social rift, but serious tensions within “Law and Justice” itself.

Throughout history, women have been defined by their reproductive role and sexualised, forced to bear children often against their will. We have been exploited and underpaid, and now our role is politicized again. But what we have recently been witnessing in Poland, and around the world, proves that women are a powerful force that must be respected.

Alex is an RSA Connector and holds a PhD in economics and an MA in English Philology. She is also a documentary film maker.