Sad and glad tidings in memory of Sir Ken Robinson

About six years ago I was delighted, if not slightly flattered, to be invited to join the RSA for my “services to innovation in education” because of a project I had co-founded in my sons’ primary school and gave my career up to roll out across the country as a non-profit community enterprise called STEAM Co.

I soon realised how much membership of the Fellowship was going to change my life forever having met and collaborated with the widest range of inspiring, generous and gracious people from across the worlds of education, business and wider society.

I had been inspired to start the project a few years earlier in no small way by Sir Ken Robinson's TED talk on ‘How schools can kill creativity’, which was particularly poignant to me with two young sons and a career behind me in the creative industries.

I particularly enjoyed the RSA’s animate film accompanying Sir Ken's words, distilling his important message down into an even more concise, compelling and accessible format; I assumed that the majority of the other 35,000 RSA Fellows shared mine and Sir Ken's views

Five years ago, in a week I was due to launch STEAM Co. in Liverpool and delighted to include an interactive interview with Sir Ken, I was appalled to see an article in the Times Education Supplement (TES) referring to Sir Ken as the “butcher given a ticker tape parade by the National Union of pigs”.

I challenged the TES’ Editor in Chief, Ann Mroz on this, feeling that the letters FRSA behind her name gave me permission to reach out. She replied saying that the TES was “a broad church” and was duty bound to represent the range of opinions in the education community. Since then I have seen a similarly broad range of opinions represented at the RSA, not least a panel one evening representing the most extreme traditionalist and progressive views.

But if we can't have such conversations how will anything ever change? How will we ever find the middle ground on which we can build for all our futures?

Since that interview in Liverpool Sir Ken Robinson has been incredibly generous and supportive of what I have attempted to do with STEAM Co. I was particularly delighted when he name checked me and my work out of the blue at a major Arts Council conference in London and at other events. So, like many around the world I was saddened to hear of the passing of Sir Ken back in the summer.

When I heard the news, I was sitting in the back of the last camper van available for hire in Britain at the height of Covid-19 summer, on a surf beach in South Wales. This was a country that has recently rolled out a curriculum with creativity at its heart, alongside the values that Sir Ken had long argued were needed to nuture the individual talents of all our children for common good. But how to mark his passing? How to make sure I and as many other people as possible can be part of his legacy?

Last year I started recording an #ArtConnects podcast series which included both the Welsh education minister and Matthew Taylor, Chief Executive of the RSA who went on the record as saying “what you're doing is absolutely brilliant, I'm going to help you make this happen” and has been very supportive since.

Five years ago I gave a two minute talk at the RSA entitled ‘Creativity in Education: It's time to walk the talk,’ citing the inspiration not just of Sir Ken, but also Prof Guy Claxton and Seth Godin, two gurus in education and social change respectively.

In addition to providing STEAM.Co., a framework for people who want to help connect our children with their art and our communities with their schools, my tribute to Sir Ken Robinson is a short podcast series entitled #TalkWalkers20; 20 chats with people who knew and worked with him. One of the most revealing insights came from Mark Featherstone-Witty from the Liverpool Institute of Performing Arts who told me what the schools minister Nick Gibb had said to Sir Ken on meeting him for the first time: “So you're the enemy”

Sir Ken was never the enemy, but quite frankly one of the most inspiring, generous and gracious people this country never listened to, to its peril. 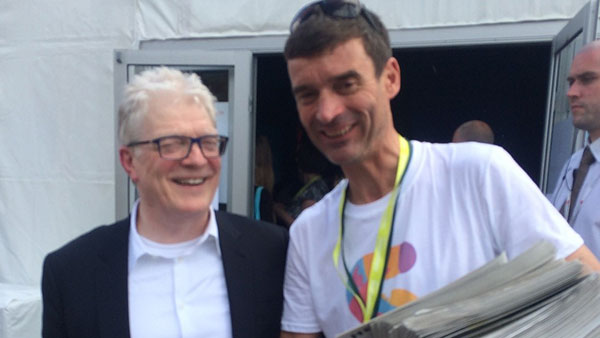 Photo: Nick Corston with Sir Ken Robinson at the Festival of Education in 2015

Nick Corston is the co-founder of STEAM Co., a non-profit community enterprise that aims to power communities to inspire their children with creativity, a project that he co-founded in his sons’ primary school in Paddington. “We are all born artists” – A Wag Inc film about STEAM Co.