Root of the matter

The inequities highlighted by Covid-19 have deep-seated historical origins.

The Covid-19 crisis has exposed and exacerbated inequity across the world, as shown in the widening economic and health disparities across race, gender, geography and class lines. In the US, it is probable that the (already significant) racial wealth gap has further expanded in nearly immeasurable ways. Pre-existing structural inequalities are the root cause of Covid-19’s unequal end result.

Inequality is not an accident

Black people have never been able to fully realise the power and freedom that wealth bestows. Throughout US history, Black people have been systematically denied the ability to build, maintain and generate wealth. As a result, they have among the lowest wealth holdings of any other racial and ethnic group in the nation. This is especially troubling during an inevitable recession, when the disproportionate economic consequences of having low wealth holdings, including the (in)ability to endure the Covid-19 economic crash, will become all too clear. Not only are Black people facing more job losses than white workers, but they tend to have less to fall back on.

According to the 2019 Survey of Consumer Finances, the typical Black household holds $24,100 (about £18,660) in wealth. White households, in comparison, own nearly eight times as much, at $188,200 (£145,714). According to research from the Brookings Institution, the ratio of white to Black household wealth is higher today than it was at the beginning of the century. Research carried out by the Insight Center shows this enormous disparity is not explained by income level, level of education, rate of return on investment or family background. 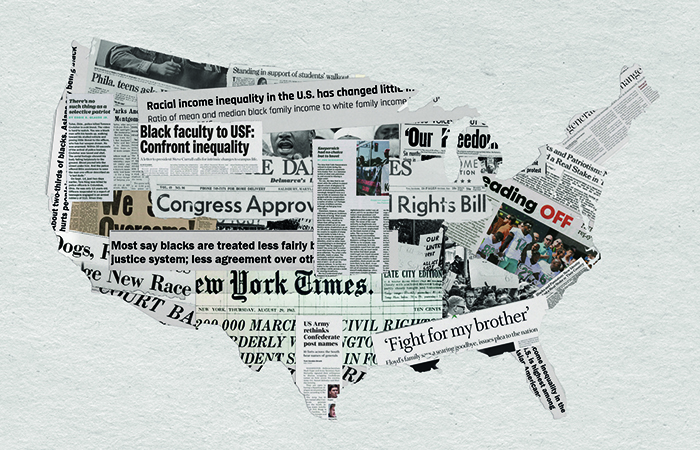 The racist roots of today’s inequality

One of America’s most enduring myths is that slavery was incompatible with capitalism. However, it is now clear that the US slave system formed the basis of both the entire national economy and capitalism as we know it today. The process of commoditising Black people was not only America’s first big business, providing the pathway for the country to gain outsized power and wealth, but the nation’s subsequent history and current discriminatory practices were also made possible as an extension of this inhumane dynamic.

Until the Civil War, nearly all cotton used in industrial production was grown by enslaved Black people in the South. The returns of monopolised cotton created wealth not just for Southern plantation owners but also for merchants, bankers and insurance companies in the North.

Slavery also facilitated a number of financial innovations and modern-day business concepts, including vertical integration and start-up costs. White men, for example, used enslaved Black people to develop new ways of depreciation. Bondsmen used enslaved Black people as collateral, and they were sold to bondholders to generate wealth. Enslaved Black migrants became a legal form of property that could be used to pay off debts and served as a source of local and state tax revenue.

Today’s shareholder primacy is also rooted in slavery. Cotton slavery was constantly being reorganised in order to maximise profits. To increase production, slaveowners experimented with labour control, establishing quotas and using forms of torture and violence. In 1862, the average Black enslaved fieldworker picked 400% more cotton than their counterpart did in 1801. If hard work alone were the basis of wealth, then Black people today would be the wealthiest people in the United States.

The ability to accumulate wealth in the US has nothing to do with individual behaviour or personal responsibility but with the longstanding political and policy choice to build exclusionary systems and institutions. One way to better understand racial inequity and how Black people specifically have been systemically blocked from wealth-building is by exploring government programmes that excluded them.

Throughout US history, white Americans have been given gifts of land, government-backed mortgages and farm loans, a social safety net and business subsidies, often exclusively. Notably, many historical government programmes not only excluded Black people but were also rooted in racist stereotypes about them that caused long-term damage that hinders the Black community to this day.

The 1862 Homestead Act, for example, is often cited as a model government-backed asset-building programme, but that story is only true for white people. In reality, it was an asset-theft programme. The Act expropriated land from 42 Indigenous tribes and redistributed it to white homesteaders who received 160 acres of land for free if they agreed to pay a small fee and farm it for five years. According to historian Keri Leigh Merritt, “The Homestead Acts were unquestionably the most extensive, radical, redistributive governmental policy in US history. The number of adult descendants of the original Homestead Act recipients living in the year 2000 was estimated to be around 46 million people.” She continues: “If that many white Americans can trace their legacy of wealth and property ownership to a single entitlement programme, then the perpetuation of [B]lack poverty must also be linked to national policy.”

Perhaps no other federal agency has had a more pervasive and powerful impact on the inability of Black people to build generational wealth than the Federal Housing Administration (FHA). The entire FHA appraisal process was based on the idea that racial segregation was necessary to ensure the maintenance of property values. This essentially created white-dominated suburbs, while Black people paid more for property than their white counterparts; that is, if they were even able to purchase a home at all. Between 1934 and 1962, the federal government backed $120bn in home loans; more than 98% went to white people. Between 1946 and 1960, over 350,000 homes in northern California were constructed through FHA financing, but fewer than 100 homes went to Black families. If homeownership is such a fundamental aspect of the American dream, then Black people never had a chance.

As the economy takes a downturn in the aftermath of the pandemic, white households and families in the US are better able to withstand these trying economic times than others. There are early warning signs that Black people are more likely to struggle in meeting monthly expenses due to joblessness or drastic reductions in income, and thus face the possibility of significant wealth loss. Today, joblessness among Black people is 16.8%. Seven months into the pandemic, Black people had recovered just over a third of jobs they lost, compared with over half for white Americans.

When it comes to keeping a roof over their heads, the struggle for Americans is unequal. According to Harvard University’s Joint Center for Housing Studies, among Black people who are renting and have lost employment income since mid-March, more than a third – 35% – deferred or were late with their rent payment in May. An analysis by the Urban Institute of the Census Bureau’s Pulse Survey meanwhile showed that in the same month 28% of Black people who own their homes did not pay or deferred their mortgage payment, compared with just 9% of white homeowners. A survey conducted by the Global Strategy Group from April to May of 500 Black and Latinx business owners found that only 12% reported having received the federal aid they applied for from the Paycheck Protection Program, and nearly half feared they would permanently foreclose within six months. Further, after states mandated social distancing during the pandemic, an estimated 41% of Black-owned businesses closed in just a month, reports the National Bureau of Economic Research.

The pandemic has exposed how decades of discriminatory policymaking and pervasive structural racism are baked into America’s housing, labour market and healthcare systems. Black people living in neighbourhoods that were redlined (a government practice in which minorities were excluded from living in certain neighbourhoods) over 80 years ago are at a higher risk of severe illness or death from Covid-19 today. A segregated labour market has disproportionately sorted Black working people into jobs that are often excluded from federal protections based on policies extending as far back as the New Deal. Many of these occupations are at the greatest risk of exposure to Covid-19 and also to layoffs. In New Orleans, for example, Black people constitute 79% of all cooks, 87% of hairdressers and 84% of home health aides, but only 60% of the population.

Society cannot afford to go back to ‘business as usual’ in the US or in any country suffering from the past 50 years of flawed-and-failed economic ideology. Economic and wealth disparities are not the cause of inequality in the US; they are a measurement. Structural inequity – in the workplace, in the economy and throughout society – is inherent to how America functions, and the only way to a better world is by building intentional, explicit inclusion. There are several ways we can do this. First, we must dismantle systems of oppression and wealth extraction. Wealth accumulation and extraction are a result of structural forces that are interconnected and deeply tied to historical policies. For Black people, accumulating wealth has become an insidious game of whack-a-mole; as soon as they fight to remove one barrier to building wealth, another one springs up. Second, we must erase dominant narratives that provide a rationale for disinvesting in Black people and their communities, and write a new story with an intentional focus on countering anti-blackness. Finally, we must support a transformative, structural approach to building wealth among Black people with significant capital investments and by centering advocacy, legal changes and movement-building efforts.

Building the wealth and health of Black women should be a primary goal. “Black women best” is an economic principle that is gaining momentum in the progressive policy space. Coined by Janelle Jones, Managing Director for Policy and Research at the Groundwork Collaborative, the framework argues that if Black women – the most disadvantaged, excluded and exploited group in the US – are able to not only get by but actually thrive in the economy, then it must finally be serving the basic needs of everyone and providing equitable economic opportunity.

Today’s economy was built by excluding Black people and prioritising the wealth of white individuals, families and businesses. This was true long before Covid-19 rocked us economically. If we begin directing policy towards Black women and centering their lived experience, we can start to right size the unequal (and racist and sexist) economic systems that prevent Black women and people of colour from building wealth. In the end, this is what will produce a society that works for all Americans.

This article originally appeared in the RSA Journal.