The importance of the built environment cannot be underestimated; it can make or break cities.

‘A vacation house, two bedrooms, two bathrooms, open kitchen, and a living area. With a view right across the sandy beach. For price information send a DM.’

If you are reading this, you do not have to send a DM: the price is $650,000. The location is not Malibu, nor the Maldives, but Tartous in Syria. Yes, bomb-shelled Syria, where significant parts of the cities have been reduced to rubble, where there have been incredible economic losses, and where more than half of the population are now either internally displaced, living in refugee camps, or are asylum seekers. The Syria where 83% of the population today live below the poverty line.

The beach house advert is one of many that offer properties ranging between $600,000 and $1m. And the advert is not foolishly hubristic: there are actually people who are willing and able to pay these prices. But for the vast majority of Syrians, homes with a $650,000 price tag are outside the realm of possibility. Nonetheless, real estate prices in ‘desirable’ areas are as high as ever, and so is the dream of home.

When I wrote The Battle for Home, Syrian cities, including mine, were still under fire. The full extent of the damage was not yet clear, but I saw how the transformations in our built environment had paved the way for such a collapse. Our city planners, influenced by the French colonial legacy, changed our cities so that they were no longer inclusive, nature-friendly, self-sustaining havens, but were instead segregated, compartmentalised ghettoes. The loss of our sense of belonging made us much more ready to lose ourselves to the cycle of destruction and civil war. The connection between how we build and how we live never seemed more pertinent to me than during those times of death and destruction.

However, what surprised me was how global the Syrian story turned out to be. It’s true that the world does not suffer our political problems, but it is definitely displaying similar architectural and urban symptoms, such as segregational zoning, city centres aimed at tourists rather than locals and faceless buildings. 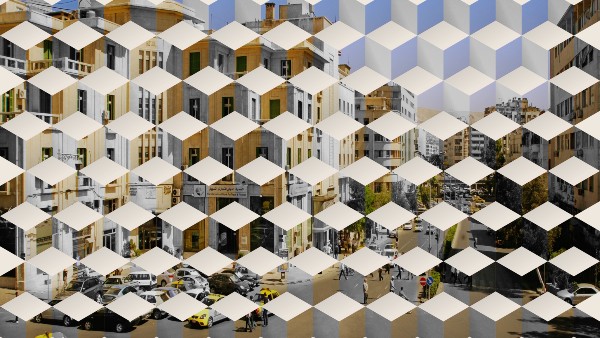 The value of home

The real value of things corresponds with the production cost, including labour, shipping, marketing and other aspects that are tangible and can be measured. But the perceived value is where things become trickier. This is the customer’s measurement of an item’s value, and does not lend itself so easily to set metrics. In the arts, an artist’s talent and craft – and their reputation – imbue their work with a value. But when it comes to architecture, which encompasses the practical arts and big industry, the market value relies heavily on social zoning.

The beach house, taken just as a building, may not be worth more than a few thousand dollars to cover the costs of the building materials and the facilities provided. There is no special expertise involved, nor ‘invaluable’ artistic craftsmanship, in building this simple structure. The only factor that raises its price is its social surroundings; the ‘type’ of people living nearby. Architecture is the only form of art that does not take its value from its makers, rather it takes it from its users.

Architects are essential players in this game of segregation. It all begins with designing a sign language of forms meant to distinguish and separate: bigger scales, extravagance, gated communities and so on.

The tapestry of the urban environment

As people learn to recognise these signs, they want to have this outward marker of prosperity. Neighbourhoods start to spring up based not on social knots created organically over time, but delineated along lines of wealth. Neighbours are substituted with lifestyle-matching peers. Neighbourhoods which benefited once from the collaborative and supporting environment of a community rely today on what literally counts: money.

This is a very dangerous slope. The higher the price of real estate, the deeper the inequality among people. This is a matter of life or death for cities. Because when the prices of homes go up, so do the prices of everything else. A store that has to pay considerable rent due to its location will add those extra costs to its products, creating a chain of inflated value. At some point, as Syria – among others – has shown us, the chain will collapse, and an explosion becomes inevitable.

So what can be done? My search for answers led me to the old Islamic cities, where Muslims and Christians, poor and rich, lived side by side. Their survival offers solutions to the spiral of problems of the modern city. The buildings’ outer appearances were organised around principles of modesty and privacy, craftsmanship and creativity, and – most importantly – a sense of respect for everything, from nature to neighbour. This was woven into the tapestry of the urban environment, and was then reflected in the social fabric.

In Syria today, few can afford multi-million-dollar leisure properties with ample outdoor space, so people picnic on the green patches beside the roads. Those who pass by in expensive cars sneer at that ‘vulgar’ choice. I cannot help but ask myself: is it the beginning of another chain of destructive antagonism?