Liberty Kitchen – a social enterprise reshaping itself for the pandemic

For two and a half years, Liberty Kitchen has been working with prisoners and those who have left to create tasty street food alongside providing a chance to change. Janet Boston FRSA shares how the social enterprise was impacted by and responded to the pandemic.

If anyone had told me it would be a nationwide lockdown rather than one in HMP Pentonville which might halt Liberty Kitchen, I would have laughed. In fact, the last time I was working on the stall with Liberty Kitchen Associates (men who have left prison) they were surprised by my sudden sharp enforcement of constant glove changing and wiping surfaces.

While driving to the market on the Friday before the Prime Minister’s first Covid-19 press conference, I was transfixed and battling with one of my colleagues to stay with the bulletins. The street looked surreal with several stalls bound in clingfilm and a few masked traders. Still the Associates thought I was over-reacting about a possible shut down. Not so the Pentonville Liberty Kitchen mess workers who were already nervous. They were right to be; listening to the first government announcement it was clear it was too risky for us to continue and that doing so could jeopardise the safety of those in prison.

For two and a half years, Liberty Kitchen, a street food social enterprise – designed to cut reoffending, promote rehabilitation and see the reintegration of men who have gained invaluable culinary, business and life skills – had been working in HMP Pentonville.

During this time, we had trained, provided mentoring and developed the skills of over 55 men through working with them to create, supply and deliver a range of tasty, original ‘street balls:' meat, fish, veggie and vegan balls. 15 of the men who had been released went on to work on the Liberty Kitchen market stall and a further three, from Cat-D open prisons, were actively hoping to secure day release to join the team. 19 other ex-prisoners had been employed for events or as drivers. 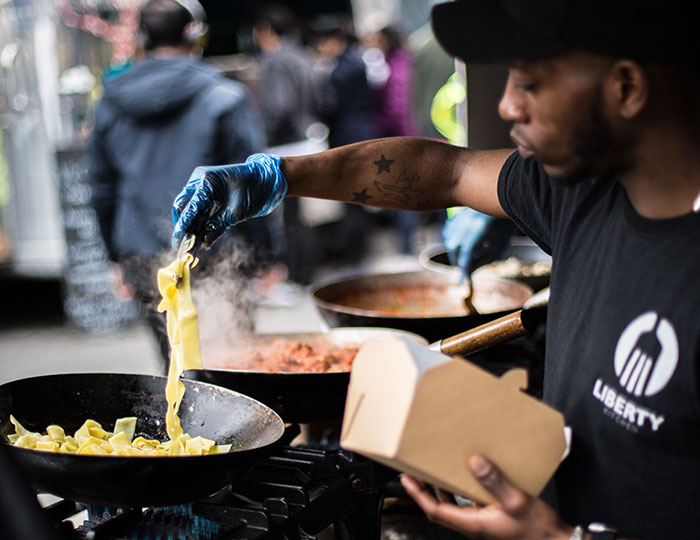 Stopping doing this work was not easy. The teams inside and outside the prison had given everything in the two weeks before that first national lockdown: extra lunch bookings, wrap celebrations, our first 50th birthday for over 90 guests in a private home. Excitingly, it was the men who were running the market stalls and production in the mess and the scaling we planned for was happening. Liberty Kitchen was an innovative model in the process of developing its next steps. With Lottery funding secured, transferring and trialling the lessons learned was about to be even more possible. Instead we faced a full stop.

Setting up a social enterprise has many challenges yet Liberty Kitchen is fortunate to have a fabulous Board of Directors (chaired by Charlie Falconer) who have given phenomenal amounts of pro-bono advice, strategic and practical assistance. It could not however have succeeded without generous grants and donations from a range of organisations and individuals, including the RSA Catalyst programme.

As the numbers of deaths in care homes began to escalate, I grew increasingly nervous for everyone behind bars. Early on we learnt of the tragic death of two Pentonville support workers both of whom I had known; this fuelled our fear that Covid-19 would ravage prison, impacting on both prisoners and staff. Thankfully, this did not happen, although the ‘second’ wave at the end of last year did see the virus travel across different wings. For the first time the men I usually work with found themselves in isolation after the mess chef tested positive.  If isolation is hard when confined to your home, imagine what it is like being banged up ‘behind the door’ day in day out with a cellmate in a space the size of a small bathroom.

I worried too for the men outside. We stripped out all operating costs and worked to make our tiny cash reserve stretch to provide some cover. One of our Associates developed a business plan, another cooked for local construction workers, a third drove medicines round London, while a fourth studied food hygiene. Could Liberty Kitchen survive? How might it reposition? Consulting with our Board it was clear that, if we were going to make it through the devastation likely to be wreaked by the pandemic, we needed to pivot and rethink our strategy.

Steered by their advice I talked with stakeholders, long-term supporters and partners who helped inform a way forward. Of these, our long-term sauce guru, Guy Tulberg from Tracklements, offered to trial the sauces as part of our ‘pivot strategy’. The ‘end’ of the first national lockdown in June saw the Liberty Kitchen market team gather at Leather Lane. Excitement evaporated into shock as the desolation of what had been London’s busiest weekday food market and its surrounding streets sunk in. Our Leather Lane Polish sausage ‘neighbours’ had kept their stall in Camden but with sales of under 10 – and sometimes five – prospects looked bleak.

Meanwhile, we were encouraged by HMP Pentonville’s response; the prison liked the idea of afternoon shifts that would allow social distancing. I asked the reduced number of mess workers what they thought and, despite a weariness from having endured months of Covid-19 restrictions, they agreed to give it a go.

A three-day week saw Liberty Kitchen begin to rebuild production and a socially distanced lunch for Wilmott-Dixon lifted the spirits of both teams, in and out of prison. Guy from Tracklements helped oversee the first cook-off of the Liberty Kitchen ‘secret’ sauces in the staff mess and advised on all aspects of production. UnLtd got in touch about the Social Enterprise Support Fund; this proved to be a fit for the sauces and helped us to look at how we could target different outlets with a range of offers. Recruitment of a top London chef, Matt Bishop, saw renewed impetus for recipe development along with supervision of sauce and street ball production. In just a few weeks the team created some great new flavours: a venison infused mac ‘n cheese ball (one of our best sellers); a five-a-day vegan ‘Green Lane’ ball; and several ‘Soho Square’ specials including Hong Kong chicken and a sublime shiitake ball.

Given what each man in prison had faced – no in-person family visits, delayed court or probation hearings and transfer opportunities – the way they worked and their attitude was impressive. Outside prison, the Kent variant was taking hold and the cases began to climb. We dropped back to one afternoon shift per week. London lurched from tier four to tier five to national lockdown and it seemed incredible that we had been discussing scaling up upon our post-Christmas January return.  It wasn’t long before outbreak status was declared across the London prison estate.

Locked out again, our principal funders agreed limited flexibility, while I frantically started to chase ways to continue with the sauce production, wondering if there was any way to kick off the meal-kits. Market options appeared to have potential but nothing tangible was coming through. Until, completely out of the blue, a text arrived from a friend, who had attended the Pentonville taster evenings, asking if we could produce meals for medics on the Covid-19 frontline at the Royal Free.

11 weeks later, thanks to the gift of the Crisis café kitchen on Commercial Street and the heroic efforts of the outside team of Liberty Kitchen Associates led by Matt, we have produced over 300 lunch boxes every week throughout February and March. It wasn’t easy and there were a lot of factors to consider including Covid-19 compliance, insurance and local authority notification. Ingredients delivered into a van! The first three weeks saw us deliver our BBC Radio 4, 2019 best in UK classic street food: 'Roman Road,' a sumptuous beef ball flavoured with sun dried tomatoes and basil cooked within a roasted red pepper tomato sauce; 'Lee Valley,' a combination of tubetti pasta, Cheddar and dijon mustard coated in panko; and 'Kew Garden,' a delicate courgette, onion, rice and tofu vegan ball served with a butter bean salad tossed with salsa verde. Recently, we changed the offer to the Soho Square Hong Kong Chicken and Shiitake Mushroom vegan balls developed in Pentonville in late 2020. Whatever happens, producing food for the NHS has been a privilege.

The best thing has been hearing what this meant to our Associates:

As ‘DG’ said: “Getting us out, be busy, proactive and helping us feel like we’re valued as we’re doing something positive to contribute during this Covid epidemic. We’re happy as a team because before we were isolated from our friends and family. So this has helped strengthen our self-esteem and confidence…making us feel less depressed while doing something rewarding and helping the NHS.”

MM agreed: “It’s been immensely helpful and mentally has helped me keep my mind-focused especially as we’re cooking for some very special people… It’s really kept me sane. In fact tell ‘em doctors they would have been seeing me in there if I hadn’t been doing this wonderful job for them.”

So, what next? As the impact of Covid-19 continues to wreak havoc – despite the vaccine – looking forward is daunting. It is however salutary to consider how many of those who have been worst affected are those held in prison, where lockdown restrictions may be easing but where the long-term impact of hours and hours behind the door cannot be underestimated. The complexities of managing a prison in the face of the pandemic are huge.

Liberty Kitchen appreciates having been able to return to HMP Pentonville in 2020 despite the reduced numbers of men, hours and ever-present threat of having to close should outbreak status reoccur. This ongoing uncertainty, coupled with the near devastation of most of the central London weekday markets means that repositioning and rebuilding Liberty Kitchen will not be easy.

That said, thanks to our active decision to pivot and the support we have had to achieve this, we have sauces to launch and have shown that we can deliver over 300 take-away lunch boxes a week, give great service at socially distanced events and, even during the darkest hours of the pandemic, create original mouthwatering recipes. As importantly, the Liberty Kitchen stakeholders (inside and out) have risen to the challenge despite the hardships they face. The goal to scale and transfer learning continues along with realising the original vision to provide opportunity and the chance for change at a time when the need for hope, particularly for this group of people is greater than ever before. If you think you have something to contribute – talent, time, help securing events or funds – please get in touch!

Janet is Founder Director of the Liberty Kitchen Project.