As Scotland looks to its future, the RSA is well placed to explore new ideas and bring together diverse viewpoints

When I had my first interview to work at the RSA, nearly 11 years ago, I made a bold claim: “Scotland is the best opportunity the RSA has to change the world.” Looking at where we are today as a nation, I feel confident in standing by that statement. The appetite for change and impact that exists in Scotland chimes powerfully with the call to action that motivates us at the RSA. As an organisation rooted in the philosophy of the Enlightenment (and therefore by default in the contribution that Scots made to that movement), the RSA is well positioned to continue to help shape whatever future path Scotland takes.

Scotland is an ambitious small country, one that wants to be seen as a leading player in critical areas such as responding to the climate emergency and exploring innovative new social and economic policies and models. There is appetite for testing new ideas, and a desire to find our place in a rapidly changing world.

Over the past few years, politics in Scotland has been in flux. Brexit has seen the concept of Scottish independence not just on the table, but consistently supported in polling; and the Covid-19 pandemic has thrust into stark relief the failings inherent in our social security systems. All of this opens up space for change; yet it also raises questions as to how that change can happen, and who can make it happen. 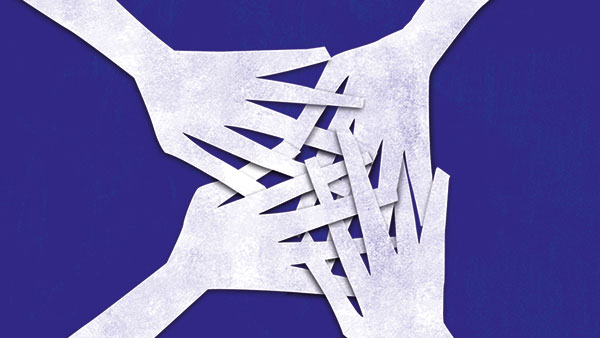 From my experience, change must be driven by civic society and the wider Scottish population if it is to be fair and sustainable. As we have explored at the RSA over the past year, polarisation has become a significant challenge across many countries, and Scotland is no different. The divide over the country’s constitutional future has been the defining fault line in Scotland’s political discourse over the past few years; more recently, debates over issues such as Brexit and the proposed reconfiguration of the Gender Recognition Act have also led to significant disagreement. The Scottish National Party has been the dominant political force in Scotland for over a decade, but it now faces significant splits between different factions. Meanwhile, opposition parties have been struggling with their own challenges, with Scottish Labour and the Scottish Conservatives having both ousted their leaders recently.

The political environment is fractured and divisive, and therefore a challenge to progress. However, the current state of affairs also offers the opportunity for Scottish civic society to respond. In order for it to do so successfully, there are several key characteristics – already existing but requiring support to grow and flourish – that are essential: active collaboration, innovation, system change and global connections.

It is true that the size of the nation (Scotland’s population is 5.5 million), coupled with the openness of the political system, can make connecting with politicians and decision-makers easier than it would be in other countries. Collaboration within sectors tends to be strong, but there can also be silos between different parts of society, as the public, private and third sectors can operate fairly separately.

For civic society to drive forward positive change in Scotland, we have to spread our networks of collaboration beyond our own sector, finding ways to engage private enterprises and the public sector in a shared endeavour. We must root that collaboration in action; we are not short of ideas, but we must now look to deliver them. And we have to create a message that all of us in Scotland are part of the solution.

The Scottish policy environment is open to innovation. Frustrations with the frailties and failings of the current system, the impact of Covid-19, relatively broad civic and political consensus around certain approaches, and a well-educated population have created an environment in which ideas can flourish. Scotland has become recognised as a world leader in a range of new approaches, from responses to the climate emergency, to re-imaging economic systems through the lens of wellbeing, to new social policies such as basic income. These ideas are not unique to Scotland; however, the interest in and openness to them from politicians and the wider public offers a powerful opportunity for embedding change.

It has been clear that the areas of innovative policymaking that we are involved in at the RSA, from the Future of Work to Regenerative Futures, Universal Basic Income to community banking, have had a resonance here in Scotland, opening doors to engagement and impact. There is an opportunity for organisations like ours to work closely with other civic society groups in Scotland to ensure that policy innovation is rooted in the needs and experiences of the people of this country and driven by the desire for positive change.

One of the areas of RSA work that has picked up considerable interest in Scotland has been our Living Change Approach. As discussed elsewhere in this issue of RSA Journal by my colleague Joanna Choukeir, the approach offers a framework for systemic change that is rooted in design thinking. It is perfectly attuned to the challenge and opportunities for Scotland and has been used by public and voluntary sector organisations to great effect. For example, NHS Lothian, which has been striving to ensure its strategic vision can rise to the numerous challenges on the horizon, has found the approach immensely helpful, and the Scottish Commission for Learning Disability has used the framework to review and refresh its priorities.

Change, even in a smaller country with many advantages to hand, can seem overwhelming. Real, lasting, positive change requires a systemic approach, iterative in nature, but with an achievable aspiration as its goal. The Living Change Approach allows us to bring that system change to the forefront in Scotland, and to collaboratively build deliverable impact.

Brexit and evolving public opinion on the issue of Scottish independence have given further impetus to the country’s drive to find a place for itself in the world. This drive transcends the constitutional debate. It instead demonstrates a non-partisan recognition that as a small country that is interlinked into the global community, and dependent upon it for much of the change we need to see, Scotland has to find a way to learn from, and influence, partners across the world.

There has been much progress in this area already. The Scottish Government has set up a network of hubs in major cities across the world, which are exploring opportunities for trade and investment. Major international opportunities such as COP26 have been secured for the country, ensuring that the eyes of the world are upon us. Policy innovation such as basic income and the wellbeing economy have garnered a global reputation for Scotland as an innovative small nation. And work from organisations such as ourselves at RSA Scotland has started to tap into the global appetite for collaboration with the country, from the burgeoning relationship between Glasgow and Pittsburgh, to the collaboration and events with Fellows in Germany, Japan and Oceania, to name but a few. These relationships, rooted in action around economic opportunity, good work, sustainability and new models of the social contract, offer examples of what real-world impact can look like.

Civic society can help drive these connections and ensure they are rooted in action. The RSA offers a positive and non-partisan space to explore and challenge new ideas, and to bring together diverse organisations and interests. Enhancing these relationships, building on the global goodwill and connection to Scotland, and developing new partnerships are essential to increasing Scotland’s prosperity and success.

Scotland, like many countries, faces a range of challenges and opportunities in the decades ahead.  Some sit firmly within our control as a nation, some require wider examination of the structures of power in the UK, and some can only be responded to on a global level. For Scotland to create a positive future for its inhabitants it will require a greater harnessing of the different parts of society, and in particular for civic society to be seen as a central driver of change rather than an optional extra.

It is not enough, as we move out of this world-changing pandemic, to simply aim for our people to survive. Instead we must ceaselessly work to create the environment in which they can thrive to their fullest potential. RSA Scotland, our Fellows and our global network of allies are committed to being part of that solution.