Building strong foundations for the future requires collective effort, with the public and private sectors both playing a part

Grafton, a small New England settlement in Vermont state, had long been home to those seeking a quiet life characterised by low levels of government regulation and civic participation. It seemed like the perfect place to develop a community based on logic and free market principles, and that is exactly what a group of libertarian activists, calling themselves the Free Town Project, attempted to do. During the 2000s, these ‘Free Towners’ moved to the area, aggressively deregulated, slashed public services by a third and undermined the legitimacy of the local government. An expanding population and contracting tax revenue precipitated a perhaps unsurprising perfect storm. 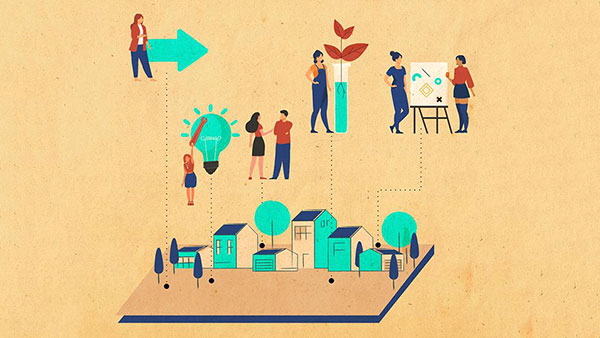 Over the next decade, things got steadily worse and the social and environmental fabric of the town started to crumble, from potholes to rising crime. While individual freedom grew, collective resilience weakened. Had the lessons of what happened in Grafton – recounted by the journalist Matthew Hongoltz-Hetling in his book A Libertarian Walks Into a Bear – been heeded, perhaps we would understand better the importance of community resilience and the mechanisms through which people come together to attend to common challenges.

We attend to these challenges in the places where they manifest: in the neighbourhoods, parks, estates and town centres where we go about our daily lives. Our ability to succeed depends on the range of collective resources and assets available. Yet, in many western countries, our responses have been fatally undermined. In the UK, Covid-19 has exposed the extent to which our society is riven by structural fault lines, exacerbated by a policy of austerity that has undermined the resilience of people, communities and institutions to effectively absorb the shock of a crisis.

We have cut support for the most vulnerable, leading to worsening living conditions. Food banks and other such Band-Aids provide much-needed help, but also normalise poverty, while investment in prevention has been significantly cut. Action for Children finds that early intervention services for children have seen spending cut by 46% in the eight years to 2018/19. In 2019, the UN Special Rapporteur on extreme poverty and human rights reported that a fifth of the UK population lives in poverty and, according to the Office for National Statistics, the difference in life expectancy between the most and least deprived areas in England widened between 2013 and 2018.

We have also systematically disinvested in our communities, particularly the poorest. According to a 2019 report by the Institute for Fiscal Studies, in the decade since 2009/10, cuts per person in the 10% most deprived council areas have averaged 31%, compared with 16% cuts in the least deprived 10%. This has resulted in the closure of valuable community assets and charities folding as grants and donations fall. The ability of our communities to weather the storm of crisis is also reliant on the amount of social capital they have and people’s desire and ability to step into the spaces left by a retreating state.

Out of necessity, and against the odds, communities, the wider public sector and civil society have stepped up and worked together to respond to local needs, largely in the absence of effective direction, investment or coordination from government. Over last summer, I heard many stories from leaders of community businesses and social enterprises about how they had responded during the first few months of the pandemic. What can we learn from this endeavour if we are to put in place some firm foundations for the future?

In January 2021, with funding from the National Lottery’s Emerging Futures Fund, the RSA held a series of community listening events in Birmingham, Norfolk, Lothian and the North West region of England to hear about how people are taking action to tackle the myriad intersecting problems that their villages, towns and cities face. This work forms part of our exploration of how communities are coping with Covid-19 and how this may lay the foundations of the future that local citizens want.

People were supporting local community businesses and shops, more appreciative of their local neighbourhoods and keen to have more of a say in their development. As one participant said: “I’m getting more involved in local grassroots action that has been increasing over the past decade as mainstream services have been withdrawn.” We heard about the stresses experienced by those running local groups and social enterprises – including high levels of uncertainty around their business models and loss of income – about rising need and adapting to changing circumstances, and of the sense of pride and reward intrinsically involved in this endeavour.

These social entrepreneurs and community leaders had the crucial feedback loop of seeing first-hand the people in their own communities benefit. They are an important part of the picture, operating alongside local government, education, health services and the wider public, private and charity sectors. Little wonder, perhaps, that the World Economic Forum COVID Response Alliance for Social Entrepreneurs called for “all actors to stand by social entrepreneurs as first responders to the Covid-19 crisis and as pioneers of a green, inclusive society and economic system”.

According to figures from UnLtd, a foundation for social entrepreneurs, one in four people who want to start a business want to create a social enterprise. Operating in the space between the state and the private sector, social entrepreneurs are critical agents in local change processes. Their perspective, unique set of skills and competencies allow them to see new ways of responding to societal problems. Close to the ground, they have skin in the game, living in the communities in which they operate and having a deep and direct understanding of local problems. The social innovation processes that they draw upon are typically powered by community goodwill and social capital, as well as more traditional assets and resources. They are able to test new ideas, actively involving citizens throughout the innovation process to ensure they respond to needs, while creating a sense of communal ownership of new products, services and processes.

As we heard from participants in the listening sessions, we need “to encourage new entrepreneurs, young people, fostering new ideas, hope and encouragement to make the world a better place,” and “fresh ideas, so we don’t try to recreate the old world or spend too much time lamenting how bad it is”.

Local leaders in all sectors and organisations need to actively grow and support an ecosystem of social innovation and enterprise that empowers citizens to make the changes they want to see locally. To do this, the public sector must do much more to open its arms to the efforts of social entrepreneurs and community organisers. This will not be easy, as it involves transferring power and legitimacy to citizens and developing new ways of funding and budgeting. We must move beyond slow commissioning processes that assume we can specify all of the deliverables in a complex situation and avoid combative contractual delivery relationships that are doomed from the start. Instead, we should do more to invest in the infrastructure that enables enterprise and voluntary endeavour to flourish alongside more traditional public and private sector bodies.

These organisations will emerge and adapt; they will prototype, test and learn what works, prioritising needs over profit. New forms of partnership are needed in which budget-holder and fundee learn together and ensure value for money. Local public services have long experimented with mechanisms such as devolving budgets directly to communities and community-led commissioning. These approaches should be amplified and include more spend that is currently controlled by central government. For government to mandate innovation is to fail to see that in complex situations it can only ever be context- and person-specific. Without decentralisation of the process of innovation, the innovation we seek gets crowded out. Perhaps, if the Social Value Act and other means of accounting for value – and the long term – were truly embedded, we might finally break down the unhealthy default of ‘big contracting’.

Rather than responding to poverty through private sector delivery of food parcels – where, as we have seen, profit margins and distance from people’s experience can backfire – what about leveraging local food supply chains? Greening the supply chain, supporting local jobs and stronger relationships with providers are all intangible benefits when overseen from afar but massively important locally. Subsidiarity is the idea that decisions should be taken at the closest geographical scale to the people and communities impacted. This principle should apply to commissioning and to how we spend public money.

Levelling up in this context is no political soundbite, nor is it a paternalistic, technocratic exercise in command-and-control. As one participant said: “The state system needs to be about facilitating the local, the community and the family to respond to people’s needs; they should do away with the big support structure.”

This requires a fundamental rethink and realignment of what it means to live in a society in which the talents of everyone are valued and liberated. We may enter an extended period of time post-Covid-19 in which new ideas and innovations flourish, driving competition between them. This is the natural order of things: those ideas that are the best fit for the changed context are most likely to survive; others are likely to fall by the wayside. Yet good ideas can be crowded out by the controlling instincts of government and those seeking to return to the status quo.

Foundations for the future

Returning to Grafton, there are lessons to be learnt. North America is home to around three-quarters of a million black bears and Grafton was attracting more than its share of particularly daring ones, prompting a very real threat to life for residents. Yet, to do anything proactive about the bears would be to undermine the libertarian experiment. Caught on the horns of this dilemma, the zero-government approach proved incapable of dealing with the problem, reinforcing the notion that any individual must eventually face an issue bigger than their own ability to resolve it. As Hongoltz-Hetling writes, “when it comes to certain kinds of problems, the response must be collective, supported by public effort, and dominated by something other than too-tidy-by-half invocations of market rationality and the maximisation of individual personal freedom”.

If we are to leave anything behind in the wake of Covid-19, it must surely be the application of deterministic, command-and-control and largely short-term thinking to complex situations. Ultimately, establishing foundations for the future is not about public or private, local or national, paid or voluntary, social enterprise or philanthropy, economic growth or sustainable resource use. It cannot be reduced to an either/or dichotomy; our communities need both/and propositions, grounded in collective effort.

There are other crises at play – notably climate change – and there will be more to follow. How we learn from Covid-19 will go a long way in shaping how we respond to these challenges. If the conversations the RSA has been having are anything to go by, community has to be at the heart of this action. Perhaps that is it, in a sentence. It is time we saw community not as a noun, but as a verb.