Can we shake on it?

When folks heard that I, a palaeo­anthropologist and evolutionary biologist, was writing a book about the handshake they assumed I would be writing its obituary. I would be doing no such thing.

In the 21st century we find ourselves living amongst the ruins of an enormously diverse range of greeting cultures. Among my favourite now-extinct greetings are urine washing ceremonies and buttock ‘presentation’ – bending over to present one’s rear end or simply exposing one’s buttocks or sexual organs – a tradition thought to have been present from Europe to Japan to the Fulani people of Africa. We are familiar with the concept of linguistic extinction, but until recently, few of us considered greeting culture extinction.

Pre-Covid-19 we knew the main greeting gestures that had survived through to the modern day: the hug, the kiss (what the French call la bise), the namaste, the bow, the nose rub and, of course, the handshake. But, up until March 2020, it was only the handshake that appeared to be going from strength to strength. Why?

It is probably no coincidence that the egalitarian handshake – with a choreography based in symmetry, so equalising the participants – rose in prominence alongside democracy and feminism. Contrast this with the hierarchical greeting gestures of the European Middle Ages, where one would bow or place one’s hands together between the palms of someone higher in the hierarchy, known as immixtio manuum. 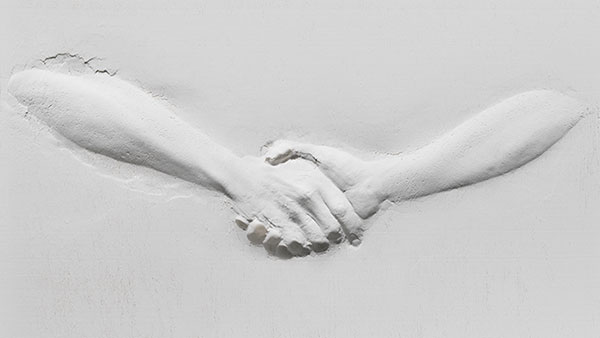 But that cannot be the full story of the handshake’s rise. See, what many do not realise is that the Covid-19 era is by no means the first epidemic or pandemic to cause the handshake to fall out of favour. The history books are littered with references to the handshake’s demise as an infectious disease spread; but it was always temporary. Can that be by chance? In my book I argue that it is not, because contrary to popular belief the handshake is biological, not just cultural, with a clear functional biological purpose. In fact, I argue that the handshake is probably embedded in our DNA and is at least 7 million years old. That is the reason that death rarely becomes the handshake.

Let’s shake on it

There are different kinds of handshake cultures. The ‘handshake lite’ – the one most practised in the west, the precise choreography of grasp, shake and release – is the scaffolding on which something much more elaborate can be built. In many African countries and regions, including Liberia, Kenya and Ghana, there is a handshake that culminates in a finger snap or click, and Nigeria has one that involves clasping and snapping just the thumbs, the louder the snap the better.

Many of the handshake variants have a performative element that make the British version look more like someone’s first day in a hot yoga class than a Cirque du Soleil extravaganza. However, it is specifically the handshake used in the west that has had meteoric success, that is exported most and that is used in business, politics and even sports. The reason for this is the age-old story of cultural dominance. We can be sure that 10,000 years ago there were many more languages, cultures and greeting behaviours. But then agriculture was invented, and aside from revolutionising food security, it allowed humans to come together in larger groups than could be supported by the hunter-gatherer lifestyle, thus encouraging homogeneity in greeting cultures. Later on, colonialism caused further greeting culture extinctions, and globalisation and the interconnectedness afforded by modern travel have, I am sure, been the final nail in the coffin of some of the more unusual greetings.

Whose greeting comes out on top when two cultures meet? Life is not an HSBC ad – my own life is a testament to this. Until the age of 26, I followed strict Muslim law, in which the majority of Muslim jurists believed men and women should not shake hands. My Muslim background, it seems, was the dry run for Covid-19-era social distancing. It is strange to see my life reduced to anthropological trends (although why not – I do it to others), but is it really any surprise that the child of immigrants would eventually succumb to the dominant culture’s style of salutation? More often than not, the less powerful culture bows to the more powerful one. Sometimes this even goes further, and legal and political pressure is brought to bear to ‘regularise’ greeting behaviour, as in the case of an Algerian woman who was denied French citizenship in 2016 because she refused to shake hands with two male officers at the relevant ceremony.

This is cultural assimilation with a stick, sadly something that has all too often been the case. Christian missionary activity often included a push to get communities to abandon traditions that were seen as not innately ‘Christian’ (aka western). The anthropologist Monica C LaBriola writes that when the British came into contact with the ri-aelōñ-kein (Marshall Islanders), they set about changing the locals’ traditional practices, labour and dress: “Even the mejenma – the ri-aelōñ-kein embrace by touching noses – was replaced with the less intimate handshake.”

The handshake’s origins might lie deep in our DNA, but the kind of handshake most prevalent today reflects patterns of power and dominance. There’s much about the handshake that smacks of egalitarianism; but until we see Liberian finger-snapping in the corridors of Whitehall or Washington, DC, we should remember that it often tells a story about cultural power, imperialism and conquest.