In thinking about deliberative democracy, we need to pay far more attention to the performative acts of expression that people and movements use, argue Hans Asenbaum, Selen A. Ercan, Ricardo F. Mendonça.

Democracy is often associated with voice. Having a voice or speaking up is viewed as an essential ingredient of a healthy democracy. But, speaking itself is usually understood narrowly, as something that is done with words and texts only. 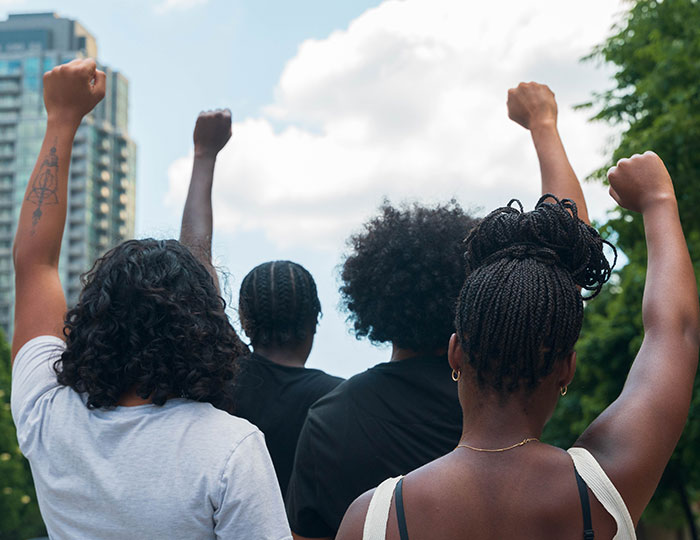 While this may be true for most cases, contemporary politics is also full of instances where speaking is done without words. During the mass protests under the slogan Black Lives Matter, for instance, we have seen police men and women joining the protesters in taking a knee. While the performative act of kneeling might look like a simple gesture, it speaks volumes about the racial injustice and the possibilities to combat it. Kneeling, in this context, symbolizes solidarity and articulates an argument for racial justice.

Yet, scholars and practitioners of deliberative democracy – a project to revive democracy through the inclusive exchange of reasons – hardly take notice of such performative acts. They tend to perceive verbal discourse and embodied protest to be at odds with each other.

The rise of deliberative democracy

Deliberative democracy has been at the forefront of a new wave of thinking about and reinventing democracy. It contends that democratic decision-making requires more than voting; it requires an inclusive conversation in which people offer their view points and learn about the views of others. The most common application of this ideal is in citizen’s assemblies, which are composed of randomly selected citizens talking through a range of issues and presenting their suggestions to policymakers and the broader public.

While citizen’s assemblies are key, they are only one way of doing deliberative democracy. Deliberative democracy is about more than what goes on in structured forums. It is a broad conversation, an exchange of both verbal and non-verbal acts, a process of doing and making, of hearing and seeing, of acting and being.

We argue that the project of deliberative democracy remains incomplete if it fails to take into account the rich variety of ways communication happens both in the forums and the broader public sphere. Non-verbal, performative acts play a crucial role in a democracy. It is often the urgency of despair that cannot be expressed through words. As Martin Luther King rightfully noted, “A riot is the language of the unheard.”

The power of non-verbal communication

Our research shows that images, sounds and physical bodies are central for realizing the full potential of the project of deliberative democracy. They can enable the inclusion of previously excluded voices in democratic discourse. They can express, ground or challenge arguments and take deliberation to unexpected places and work as conversation starters.

When, for example, the US football quarterback Colin Kaepernick took a knee during the national anthem at the beginning of a game, he brought deliberation into a football stadium. This performative act circulated through images, videos, GIFs, and memes via social media. It resulted in a large-scale public discussion not only about racial inequality but also about the boundaries of politics.

Another example can be found in the Scottish Mural Trail in support of Black Lives Matter. Last year, colourful murals and various pieces of art, including paintings, photography, videos, and digital art, popped up throughout public spaces across Scotland. They each in a different way gave visual and audible expression to arguments for racial justice without (or primarily) relying on words.

Music has also been a powerful way to present arguments against racial injustice. Contemporary celebrities, such as Beyoncé and Emicida, have been notable in their capacity to address racial issues through their songs. Every movement needs a soundtrack. This has been the central theme of a workshop on liberation chants organized by Black Lives Matter activists at the School Week of Action Curriculum Fair at Howard University in Washington. Performed in marches and meetings, such chants are part of public deliberation.

Acknowledging non-verbal communication has significant implications for deliberative democracy. If public debate is not restricted to words, hearing the other side demands attention to various other modes of expression.

When people occupy public squares, march for kilometres or paint a street mural, what are they saying and how do these acts shape political discussions? When citizens of Brazil form caravans of honking cars during the pandemic, what types of arguments are they putting forward? What do silent parades express?

Our aim is not to disregard the value of formalized forums, such as citizens’ assemblies, in deliberative democracy. Rather, we argue that we need to look at them differently. We need to pay attention to the sounds, silences, the visual expressions and the physical bodies present in these forums. It requires us to focus on the meaning of silences and body language in these forums. What do participants do when they cannot find the right words?

If we are to promote better public debate, we should pay attention to the multiple dimensions of expression. We need to facilitate formats of engagement that allow for this multidimensionality. An understanding of democracy not only or primarily as speaking but as doing, as colourful, diverse realm of action, can open up new paths both for mending and advancing democracy.

Hans Asenbaum is a Postdoctoral Fellow at the Centre for Deliberative Democracy and Global Governance, University of Canberra. @Hans_Asenbaum

Selen A. Ercan is an Associate Professor at the Centre for Deliberative Democracy and Global Governance, University of Canberra. @selenAercan

Ricardo F. Mendonça is an Associate Professor at the Department of Political Science, Federal University of Minas Gerais (Brazil), and a National Council for Scientific and Technological Development (CNPq) scholar. @MendoncaRF