“What people want is constancy”

Matthew Taylor talks with Ben Houchen, the Mayor of Tees Valley, about the levelling up agenda, devolution and what people want from their politicians

Matthew Taylor: The last year has been tough for everyone. How was 2020 for you?

Ben Houchen: I had concerns at the beginning of the year that things would be put on hold and we’d see huge delays in trying to achieve the plans we’ve set out for the next five years and beyond. But we’ve been very fortunate that, given the nature of the projects, we haven’t lost any time. Teesside Airport has probably been a net beneficiary of Covid-19 because it’s created a level playing field in the aviation market. Some of the regional airports have really struggled as a result of the pandemic whereas we haven’t. The announcement that Ryanair was returning to Teesside Airport after more than 10 years was because of Covid-19. And elsewhere, come March we’ll have 14 million sq ft approved planning on a 4,500-acre site and a new quay ready to be built starting in August.

The other side of that story though is the immediate impact of Covid-19 on businesses that have had to close. Since the start of lockdown we’ve seen the loss of just over 12,000 jobs, which takes us back to December 2016 employment levels. It’s been difficult because you’re dealing with the economic fallout, and obviously then all the health issues as well. 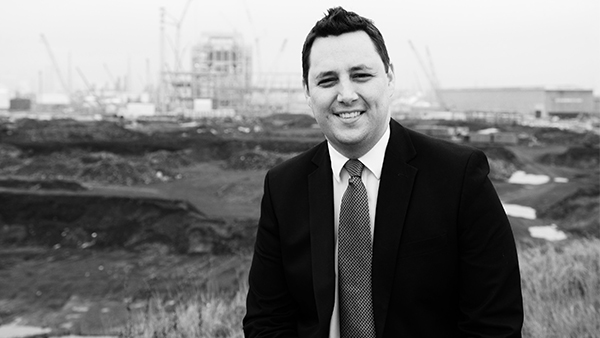 Taylor: What will be critical to sustaining a strong Conservative presence in the north?

Houchen: It’s levelling up. Levelling up is the thing and it needs to be tangible before the election. People want to be right. They want to think their vote was the right thing to do, so if the government can stand here before the next general election and point at new railways, new buses, new stations, new roads – the big things that are very visual and tangible to people round here – and the kind of investment we haven’t seen for decades, I’m confident that people will vote for them. But if they haven’t delivered tangibles then it’ll go back to the same old ways; “oh yeah, I voted Conservative, but I wish I hadn’t.” We’ll go back 20 years. If they get this right you could see the solidification of votes in areas like Teesside for a long time. The government has that opportunity and it’ll be interesting to see whether they take it or not.

Taylor: Would you say that you have already seen the beginnings of the levelling up agenda that the prime minister promised in the election and subsequently?

Houchen: The levelling up agenda really started under George Osborne and David Cameron, with the advent of the Northern Powerhouse and the idea that we needed to rebalance the economy. In all honesty I’m sat here fortunate enough in the job that I am because of the levelling up agenda and you can see we’ve made positive strides forward in the Tees Valley with the Northern Powerhouse partnership. Some of the work that I’ve done – and I’m sure that other mayors across the north of England would tell you similar things – is only possible because there is a recognition from central government that the levelling up agenda is important.

But it is fair to say – and I don’t think the government would disagree – that the agenda hasn’t gone as far as they would have liked because of Covid-19. Hopefully the real starting point will be the budget in March, which should disproportionately benefit the north of England. A large part of phase one will need to be about major infrastructure: roads, rail and freeports. I still warn the government that if they get it wrong then they’re going to be in trouble at the next general election.

There’s been significant under-investment in places like Teesside for decades – and you can point to governments of all colours over the last 30, 40, 50 years that haven’t invested in Teesside – and for us to get to where, in broad terms, large parts of the south are, the capital projects are more important to us. If you look at everything I’ve done over the past three and a half years, a lot of it is capital intensive, a lot of it is big infrastructure, because if we wanted to bring more sustainable businesses in, or to do more as the public sector, the infrastructure doesn’t allow it, even right the way through to good-quality broadband.

Levelling up in the north of England is very different to levelling up in the south of England. Levelling up to me is not really a north-south thing so much as a cities-everywhere else thing, and you can see that with the £4 billion Levelling Up Fund that the government announced. It’s not technically just for the north of England and the government recognises that places like Cornwall have equal levels of deprivation in parts to Teesside. There are very much haves and have-nots in this country, and it tends to centre around the metropolitan city areas having and everyone else not having. When it comes to levelling up the picture is much more complicated.

Phase one of levelling up in the north of England is large capital investment, then in five years’ time, once that capital is spent, the next stage is brilliant. You’ve now got the building blocks in place and you can start to tackle the more complex issues.

Taylor: Often inequalities and gaps in productivity, economic activity and employment are as big within regions as they are between regions. What’s your spatial vision for Teesside in terms of the relationship between the conurbations and the towns?

Houchen: The Tees Valley didn’t exist before 2017; we were just part of the north-east and we massively lost out as a result. We’ve had devolution now for three years and civil servants now talk as if the Tees Valley is its own economic entity and has its own economic ecosystem; it hasn’t really changed in the last three years, it’s just how we’re perceived. People see the Tees Valley as if we’re five municipal towns with villages around them and we’re miles from each other, but that’s not really how it works and having devolution helps you connect that up.

You’re absolutely right about inter-area disparities. If you look at Stockton Council for instance, even within that you’ve got the biggest disparity in life expectancy in places just a few miles apart: Yarm, which is south of Stockton, and the town centre. The difference in life expectancy in these two areas is about 18 years.

Taylor: For those parts of the economy that depend upon capital investment there seems to be a lot going on, but the immediate demand over the next year or so is a revenue challenge.

Houchen: There’s a lot of money in the capital markets at the moment, money is very cheap and lots of private money is trying to find a home. The biggest problem for the capital side of it that I see – and this is one of the reasons we’re probably more successful than most at the minute – is that there aren’t many oven-ready projects across the country, especially on the infrastructure side, which indicates a gaping hole in wider planning both at local and national government level, and in the private sector to some extent. The revenue part is much more challenging, especially post-Covid-19, but I take a more strategic view on this.

Taylor: Why is it so difficult to actually turn capital budgets into shovels in the ground and real projects?

Houchen: Fundamentally, local government and the public sector are not geared up to manage capital projects well at all. The whole idea of not being incentivised to save money; it sounds like a very Tory thing to say, but when you see that rubber hit the road you realise that actually they would rather not make a decision on an oven-ready project, they’d rather kick it into the long grass for 12 months. If something doesn’t happen nobody gets blamed because it was never going to happen, but if they do pull the trigger and they now have to build this road or upgrade this station and it goes wrong they get the blame for it. Then local government always say they haven’t got the money, they haven’t got the capacity, they haven’t got the people skills. You realise there’s always a reason they can’t do it because, again, they don’t want to make a mistake. They’ll say, well it’s up to the central government, but the central government isn’t geared up to manage large projects itself.

There needs to be a level of devolution to allow some regions to prioritise their own infrastructure and big capital projects. That way the prioritisation of projects becomes more effective, meaning you get a better spread of money and more return for your money.

Taylor: Is the green agenda an important part of what you’re doing and is it an opportunity to accelerate investment?

Houchen: The green agenda is absolutely central to what we do. We’ve got things like Net Zero Teesside which is, or will be when it’s built, a world-first industrial-scale carbon capture, utilisation and storage scheme. It’s going to be a £3.5bn–£4bn capital project that will see 10 million tonnes of carbon taken out of the atmosphere every single year, equivalent to the energy used by 3 million homes. It’ll completely decarbonise the chemical and processing industry in the Tees Valley. In addition, a lot of the technology and research done in hydrogen will be done in the Tees Valley. We already produce 50% of all the hydrogen produced in the UK.

Taylor: When you sit in a room with Conservative Westminster ministers on the one hand or in a room of largely Labour fellow mayors on the other, which room do you feel more at home in?

Houchen: Neither particularly! I’ve said this before, but one of the reasons I’m a Conservative, having grown up in a Labour heartland for decades, is because I am a bit of a contrarian. Given my age, my first memory of politics was the 1997 Labour landslide victory. In the 2010s, when I was in my early 20s, I looked around my area and thought, well hang on. Labour have been in government now for 13 years and run the councils for the last 50 years but I still see the area getting worse. There must be a different way.

When you come from a place like Teesside you think very practically. It’s why I say neither. I nationalised an airport, which everyone thought was an odd thing for a Conservative to do. At the same time, I also came up with the most pro-market policy that this government is running, which is freeports. I’m a politician who just wants to see things happen.

I really don’t believe that the public care at all about left and right. I don’t think they care that much about Labour and Tory in general. What people want is constancy and they want to know they’ve got a politician that if they say they’re going to do x, they do x. Politics should be much more executive than political. You can never get rid of capital P politics but we’ve got to be much more practical and the government has got to be able to connect with people like me, otherwise it’s not going to get re-elected.