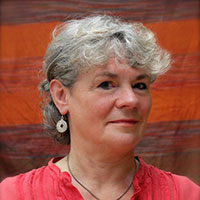 Lucy Neal is a writer and theatremaker and was co-founder director of the influential London International Festival of Theatre (1981-2005). Active in the grassroots Transition movement since 2008, she is interested in how celebratory events act as a catalyst for change. Her recent book Playing for Time - Making Art As If the World Mattered, published in 2015 by Oberon Books, is co-written with over 60 artists and activists and has been described as ‘a hand book for life’, ‘extraordinary and timely’, ‘a manifesto; a work of art’ and ‘a beautiful and invaluable book’.  Joining the dots between the ‘macro’ stories of energy, food, finance and climate change it explores creativity’s role in reimagining new ways of being human on Earth. www.lucyneal.co.uk