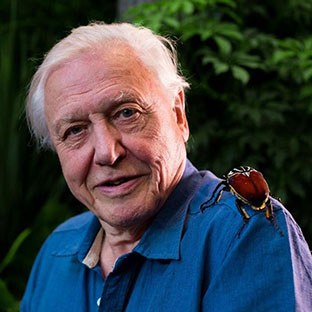 Sir David Attenborough, the ‘Godfather of natural history TV’, has introduced generations to the world’s furry and feathered friends.

Beyond natural history he’s had a huge influence as a broadcaster, introducing colour TV when he was Controller of BBC Two.

Born in London in 1926, Attenborough collected fossils as a child and gained a Natural Sciences degree from Cambridge. Since the launch of his famous Zoo Quest series in 1954 to the recent Planet Earth, he has surveyed almost every aspect of life on earth.

Whether he’s chilling with chimps or freezing with polar bears, Attenborough always reassures with his signature dulcet tones. Many have tried – and most failed – to capture his hushed, reverential whisper, full of barely contained excitement. This unique voice has formed the soundtrack to millions of childhoods and TV dinners.

Attenborough’s trophy cabinet has recently acquired the prestigious Lifetime Achievement Award. In addition, he has been knighted, had species named after him and the Sir David Attenborough Studio is planned for London’s Natural History Museum in 2008.

With warmth and intelligence, Attenborough has brought the world to our doorstep. An estimated 500 million people worldwide watched Life On Earth. Long before environmental issues were making daily headlines, he was a fervent eco campaigner both on and off screen.