Socioeconomic Factors of Plastic Waste Collection in Thailand and Beyond

The plastic waste problem is a complex, global challenge that is massive and growing. In 2015, a study ranked Thailand among the five nations that collectively produced over half of the plastic leaking into the ocean. The nation showed progress in the following rankings, but its plastic waste problem escalated during the pandemic.

As we noted in our prior post, we are involved with studies working to understand the nature of local plastic waste systems in Bangkok, Thailand, and their impacts on the lives of the people that interact with those systems. Dr. Archer has led this work for the Stockholm Environment Institute (SEI), and Dr. Rado did so for Thammasat University (TU). These studies focus on multiple factors, including socioeconomic and environmental concerns. The purpose of running the studies was to learn more about relevant systems to support efforts to improve outcomes. Desired benefits include a variety of important aims around plastic use and end states and the socioeconomic factors that are our current topic. This post looks into the complicated nature of plastic waste systems in Thailand and beyond, introduces ecosystem actors, and addresses some of the socioeconomic effects of their interaction with the system.

In Thailand, and many other Asian countries, waste management systems are underdeveloped. In such cases, work that is not formally recognized by a nation’s government dominates “the processes of waste collection, sorting, and recycling.” All levels of the system receive plastics, but informal waste collectors generally interact with the smaller aggregators — also known as junk shops or recycling shops — in their local communities. The materials accepted by different organizations vary. Materials with high demand for recycled content, like HDPE, LDPE, PET, and PP, are usually taken, but not by all aggregators.

Common uses and post-use outcomes by plastic number
The receipt of other materials depends on the circumstances, and they are generally less likely to be accepted. If an aggregator does not have a convenient outlet with which to sell a specific material, or the price is unfavorable, they will tend not to accept the material, and it will become waste. (Prime examples of this are bottles made out of PET with color added to the plastic and styrofoam containers.) Pricing and material acceptance affect waste collectors’ choices regarding the plastics they select and where and when they choose to work.

The breakout of roles is somewhat complicated due to the coexistence of formal and informal work. In general, people who are are employed by organizations recognized by the nation’s legal system are referred to as “formal workers.” Such jobs include working for registered companies, government agencies, and NGOs. People who are not employed by such entities are known as “informal workers.” These include people who work independently or for unregistered businesses.

In Thailand, the Ministry of Labor defines informal workers as “individuals who work in the informal economy and do not have employee status under the Thai Labor Protection Act (LPA).” The LPA provides Workers with formal jobs with a variety of important protections. They are limited to six days of work and a total of forty-eight hours. And in work deemed “detrimental to employee's health or safety, normal working hours cannot exceed seven hours per day, with a maximum of 42 hours per week.” Informal workers have no such limits placed on their work, and they have few, if any, legal protections, in general, which makes them far more likely to be injured while working. One study from the mid-2010s found over 60% of all Thai workers were part of the informal economy and that those workers were ten times as likely to be injured while working than the people in formal roles.

Bangkok’s plastic waste ecosystem is an excellent example of the nation’s seemingly chaotic, but individually optimized system. It is unplanned and multilayered, with a mix of registered businesses sanctioned for their activities and unregistered ones operating in a legal gray area. Both types of organizations exist in a hierarchy, with many small, public-facing ones at the bottom (including the unregistered ones) and a few large processors at the top. The latter group generally provides business-to-business services for aggregators within the industry and large organizations with high volunteers of plastic waste. Those in the middle layers collect materials from smaller players and sell them up the value chain. At the bottom of the hierarchy are local shops that buy materials from community members and sell them to aggregators. 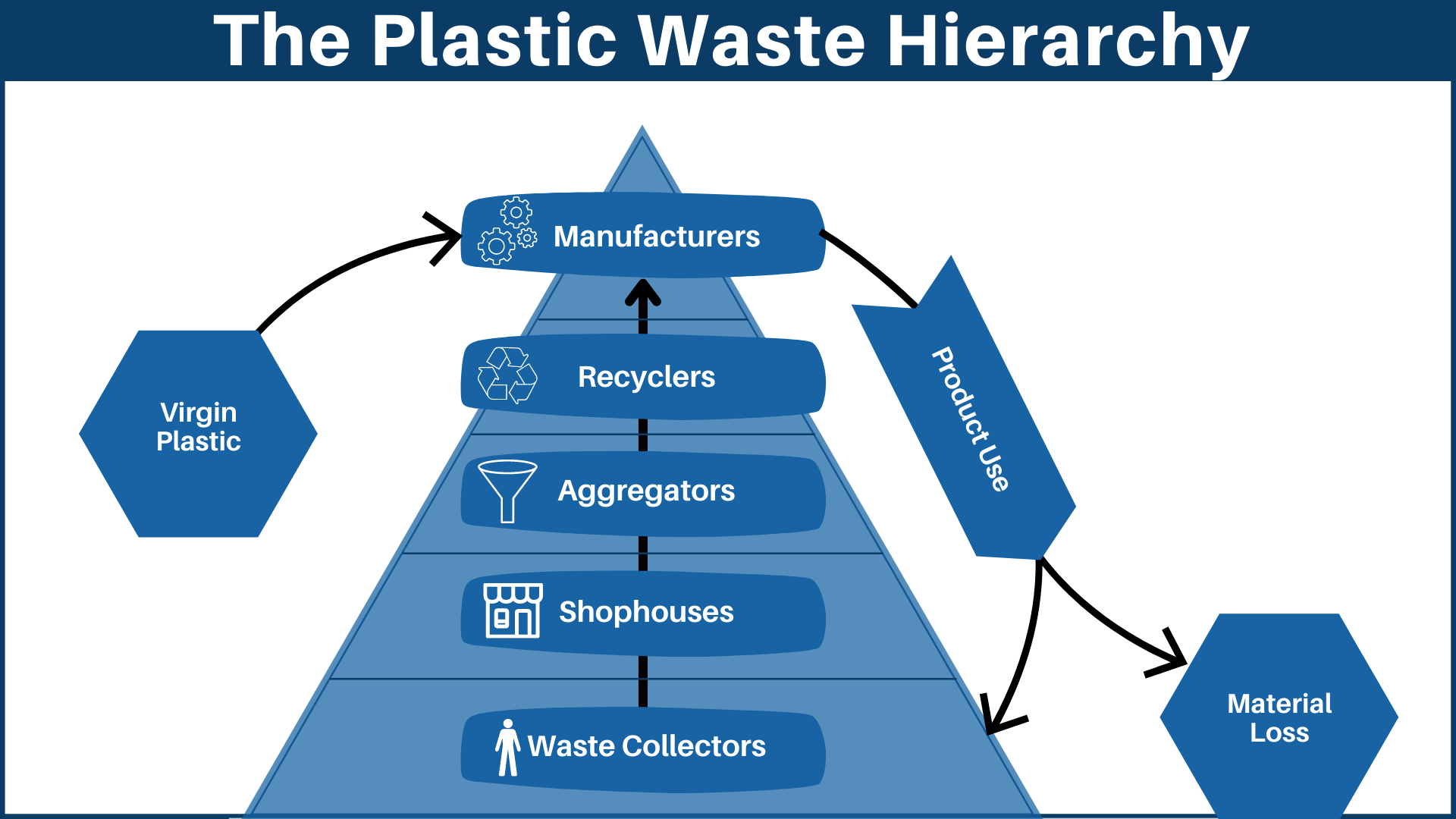 A visualization of the plastic waste hierarchy
The plastic waste value chain extends beyond fixed locations as part of the informal economy. Informal waste collectors, commonly referred to as “waste pickers,” operate in a variety of approaches. Some receive plastics that their neighbors keep for them. Others go into local communities to purchase materials from households, markets, and stores that they sell to the local shops. These are known colloquially as “salengs,” in reference to the modified scooters many of them drive, which feature a large, fixed cart on the front.

Some waste pickers collect waste materials from their communities by picking through trash in bins and waste collection sites and transfer stations, and others forage for it in nature. Workers on waste collection trucks are employed and receive wages for that work, but they bolster their incomes with informal work by separating plastics from the waste they collect. (It’s harrowing to see waste collectors performing this work in the back of a garbage truck as it passes by.) All of this direct collection is informal in nature, which means that the only compensation received for collecting these plastics is the income they receive when they sell them into the system. The two studies that are the focus of this post found that — aside from waste truck crews who take the opportunity to supplement their incomes — the people who perform this work are usually unable to find any alternative employment as most informal waste pickers have at most a primary school education. 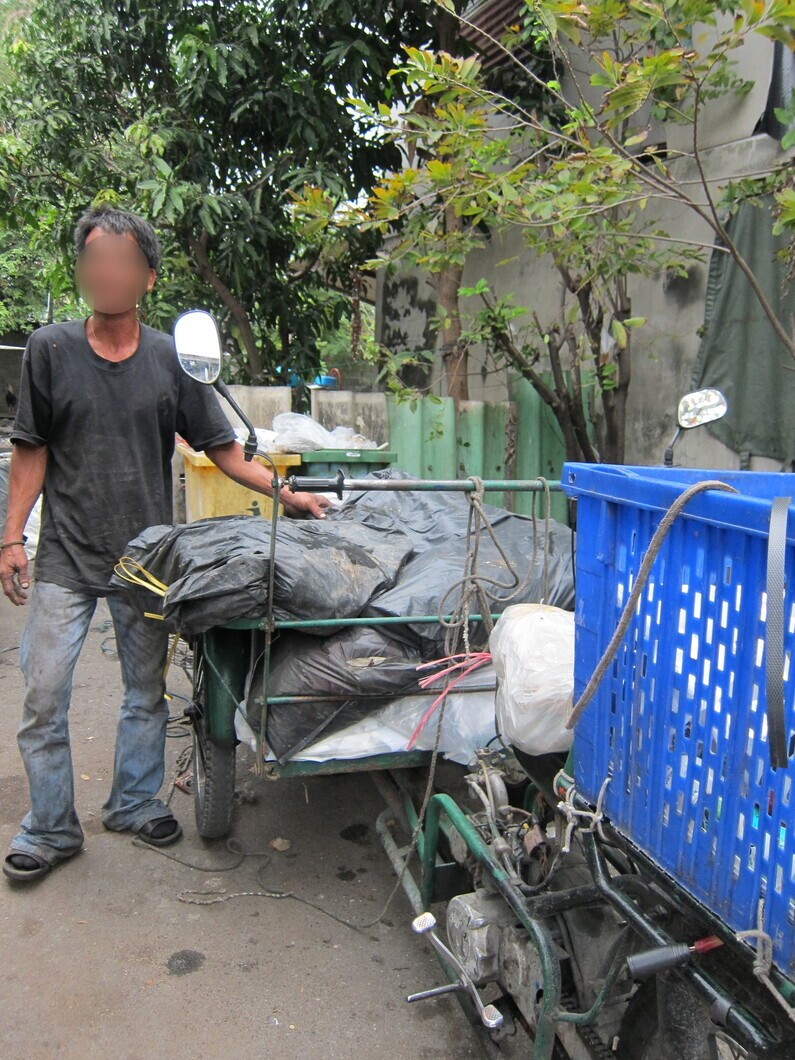 A Thai saleng with his cart full of recyclables
The SEI study led by Dr. Archer found that respondents who engaged in waste picking as their primary occupation earn around 8,000 THB per month (£1 is currently ≈44 THB). Assuming they work seven days a week (28 out of 34 respondents to the study’s survey claimed to do so), this works out to 270 THB per day. This is nearly 20% below the minimum wage. The study led by Dr. Rado at Thammasat (TU) interviewed two full-time waste pickers who work six hours per day, seven days a week, at the local waste dump. They primarily collect PET and HDPE plastics and smaller volumes of glass bottles, paper, and cardboard. One woman’s income swung between 8,000 to 10,000 THB per month, while the other averaged just 4,500 THB.

Aside from waste pickers, many households collect waste materials for recycling from packaging and other sources for extra income. The TU study found high recycling rates for certain types of waste — especially PET bottles and glass — due to financial incentives, with households earning around 80THB per month. A similar study conducted in Ayutthaya uncovered families undertaking the same practice, which suggests that it may be common.

Dr. Rado's study revealed a correlation between income generation from recyclables and the level of separation of those materials, as mixed materials receive far lower rates than separated ones due to the complicated effort necessary to assess the value of small volumes of mixed materials. His team’s finding suggests the possibility of increasing the related income for waste collection and the potential for maintaining higher quality materials for the recycling value chain.

Community members validated those possibilities in the survey administered by TU. It asked them to prioritize learning opportunities around waste management. Nearly 65% of respondents rated generating income from waste separation to be “most important” or “important,” and 60.9% of respondents were interested in learning more about reusing waste materials.

The socioeconomic factors around Thailand’s plastic waste system are complicated. Here we’ve tried to share a perspective on the general state of affairs wherever plastic waste recovery includes formal and informal work, and relevant specifics for Thailand. We also introduced different roles while spotlighting the meager returns to the informal workers who underpin the system. We’ll look deeper into socioeconomic outcomes and related risks and opportunities in our subsequent writing.