Our global Fellows span six continents and more than 100 countries. Some may not physically encounter another RSA Fellow for hundreds of miles, but it’s even more reason to connect and share inspiration.

The wonders of technology can offer a portal into the lives of our Fellows in the most remote locations, giving us a snapshot of the communities that surround them and their motivations for change.

In early July, we interviewed one of three Fellows in Iceland, Brandur Karlsson. Brandur’s life plans were upended when he became paralysed from his neck down in his early twenties. Passionate about social entrepreneurship, he created an award-winning startup called Frumbjörg, focused on supporting health and welfare innovations in Iceland.

What kind of life surrounds you?

I live in the suburbs of Reykjavik, which is not a very big city, but it is quite spread out. I spend quite a lot of time at my office downtown. People in Iceland are emerging from the pandemic now, so it’s quite a lively scene. We still have an active volcano eruption outside Reykjavik, and we can see the plume from the eruption. Right now, it doesn’t really get dark, but when it started we could see a pink-red aura above the mountains. My mother is a geophysicist and my father is a volcanologist, so I grew up around the volcanos in Iceland. This eruption came in the best possible location for that area, so it’s not going to damage any major infrastructure.

I’ve been paralysed for the last decade so these days I’ve been focused on reactivating my body. I train 2 to 3 hours a day. Otherwise I’m doing entrepreneurial work, I’ve been mentoring for a social innovation accelerator that’s ongoing in Iceland. I’m also trying to be an artist, and I’m preparing an art show for September. I paint using my mouth, and I’ve been doing pictures of the eruption. I’ve been doing this repeatedly every time there’s been an eruption in Iceland. I’ve also been playing around with NFTs and blockchain, and I’ve already made a couple of NFTs as an experiment. It’s such a new technology but the potential is there, which is what I’m excited about. Art is just a testbed, but once the technology develops further, NFT ownership over any kind of asset will be possible, and it’ll be an opportunity to change how we define ownership and value any kind of asset. 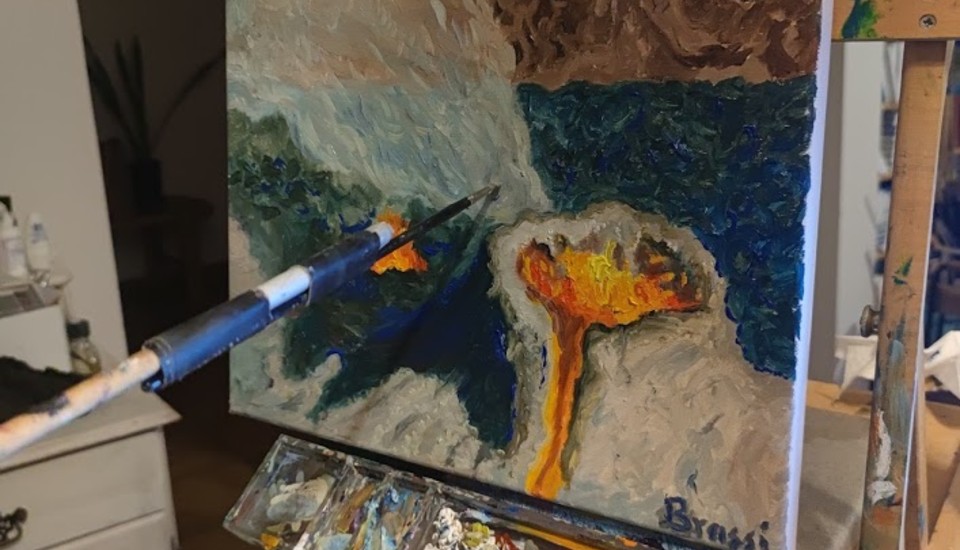 Brandur Karlsson at work in his studio

What motivates you to seek positive change?

I had a defined plan for life: I wanted to become an astrobiologist and go to Mars. But when I became sick, all my plans and goals became unobtainable, so I had to rediscover something else. I went online and started educating myself there. When I analysed how I felt, how depressed I was some days over everything I was losing and who I was becoming, I felt like I needed to recreate myself. Being ‘of use’ was always my guiding light. That’s how I got involved in entrepreneurship. A friend of mine had been running an entrepreneurial conference in Iceland for a couple of years, so I attended that and saw all these people explain how they were creating start-ups, yes for profit, but it was always more about the solution that they were generating. I really became enamoured by that community.

What brings you hope in the current climate?

I’m conflicted… though I have a lot of hope. We’re inventing new ways to solve all kinds of concrete problems through science and technology. But the social problems are much more complex and confounding. Iceland in itself is a bubble, with its welfare system and small community, but even here we have these conspiracy theorists and flat earthers, and it’s amazing to me that these views exist.

How would you like to connect with other Fellows?

I went to Nepal recently and we did a documentary about it which is still being produced. I really enjoyed it and would like to go travel once it becomes feasible again. I’d like to make a TV series about my travels, so I’m hoping to connect with people who are especially focused on social art and social innovation.

Did you find Brandur’s story inspiring? You can connect with him on MyRSA.
Would you like to take your own shot at interviewing another global Fellow and share their story and motivations for change? Get in touch with Jessica White at [email protected]a.org.uk.