UK growth up by 0.2% if metros unleashed

At a launch event at the RSA Great Room with Jim O’Neill, Lord Heseltine and Sir Richard Leese, the Commission today set out the recommendations from its final report, Unleashing Metro Growth. New analysis released by the Commission revealed that:

“I think Jim O’Neill has done an absolutely first-class job with this report. I shall be seeing him later today, and I want to congratulate him on what he has done. There is a real opportunity here—the Chancellor has spoken about it—to create a northern powerhouse by looking at how we can use high-speed rail and other infrastructure to link up our great northern cities so that we really have a proper rebalancing of our economy. That is what this is all about, and I think that Jim O’Neill’s work is all to the good.”

In response to the report, Chancellor of the Exchequer George Osborne said:

“I’ve been talking with Jim about many of these ideas for some time and warmly welcome the overall report. It makes a strong contribution to delivering the northern powerhouse I am determined to build.

“The Commission recognises that for cities to be successful they need directly elected mayors combined with real power and to be better connected both physically and digitally.

“This is what the Northern Powerhouse is all about – giving Northern cities the local power and control that a powerhouse economy needs – and I am determined to turn this vision into a reality.”

In response to the report, the Deputy Prime Minister said:

"We’re ending the era where Governments in Whitehall think they know best. Rebalancing and strengthening the economy right across Britain has been something the Liberal Democrats have been fighting for in government ever since we entered the coalition. We need to give our cities the space and the power to grow.

“Growth Deals and City Deals that I have agreed with every area of the country have freed up billions which can be spent at a local level, and for the first time councils have control over how they spend business rates raised in their area. But we must go further.

“This report is a welcome and timely addition to the conversation and I look forward to debating all these issues at my Northern Futures summit in November.

“We need to get this right, and the only way to do it is to work together to turn ideas into action.”

“Time and time again, cities have led the way around the world as incubators for innovation. The Cities Growth Commission is absolutely right to point to the ‘rise of Cities’ across the globe – there are hugely important lessons here as we look to ensure growth is more fairly balanced across the UK and the creation of more high-skilled, better paid and secure jobs.

“We must push power away from the centre and empower our cities and city regions to drive local growth. As well as new powers, Labour’s plans would see £30bn of budgets devolved away from Whitehall.

“As this report highlights, we must go further and faster to ensure our cities can better compete on the global stage and be masters of their own destinies.”

“I welcome the recommendations of the City Growth Commission about how we can empower our cities. Many of these ideas about devolution and decentralisation are at the heart of Labour’s programme for Government.

“In Britain our cities will accelerate the forces of economic development. With better infrastructure and digital connectivity, and good skills and employment strategies, they will play to the creative strengths of their people.”

Speaking at the launch of the report, Chair of the RSA City Growth Commission, Jim O'Neill said:

"When we started, we set out our purpose of only thinking in such ways that would boost long term national real GDP growth and our illustration suggests specifically how we might achieve that.

“The prospect of an additional 0.2 percent demonstrates the importance of the city growth agenda.  We’ve got to give our major metros the tools they need to thrive."

The Commission defined 15 major metros, based on population size and travel to work patterns. Its recommendations are designed to give metros greater freedoms and flexibilities to manage their social and economic policy, including control of devolved Adult Skills budgets and – for those with most robust, accountable forms of metro governance – greater borrowing and tax raising powers.

With improved connectivity, other ‘powerhouse’ city-regions could emerge to include Central Scotland (Glasgow and Edinburgh metros areas) and the Severn (Bristol and Cardiff metros areas).  The One North and Midlands Connect transport proposals put forward by cities are two examples of what can be done, and fast, when metros collaborate to develop the economic prosperity in the wider region. 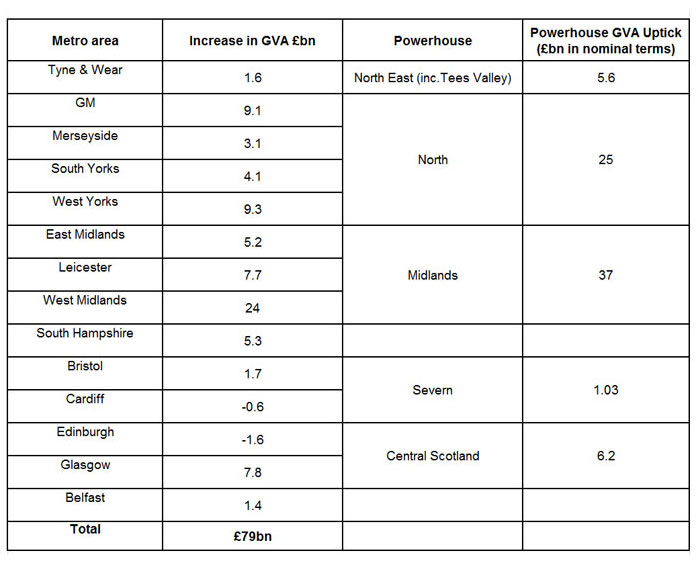